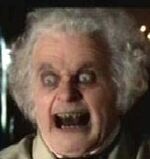 “ Why didn't you take the damn giant bird?”

All the critics gave the book poor reviews, but it enjoys being in print still, mostly because the publishers change the cover art every couple of years to trick the public into thinking that they're purchasing a different book.

Tolkien describes Bilbo, more or less, as being a horrible little rat-like creature that lives in a burrow set deep into a hillside, far below where respectable people live. His clothing, obviously slept in, is suited for his favorite activity, lounging around at home smoking the halfling leaf. He's always walking around barefoot, his hair is greasy and it looks like he hasn't washed in forever.

This is fairly typical for all hobbits, however, and the only truly remarkable thing about Bilbo is that he is in his forties, where as the average hobbit lifespan is closer to that of your common garden variety rodent. 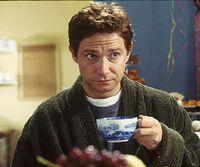 "Do they seriously have tea in Middle Earth?" Bilbo Baggins asked Tolkein.

Bilbo is spending a lovely night at home, when there is a knocking at his door. No sooner does he answer then he is hit in the head with a cudgel and shoved into a burlap sack. Later, upon awakening, the hobbit finds himself surrounded by a bunch of mandolin-wielding dwarves. The wizard Gandalf is also there and explains that this is the only group of dwarven bards in the whole of Middle Earth, shunned by all the rest of the dwarves, who refuse to take levels in any class other than fighter or cleric. They were on their way to jack some dragon for his treasure, planning to use the funds to start their own bardic college, when after a couple of random encounters they realized that a party composed entirely of dwarven bards is completely useless. They've already recruited Gandalf with promises that he has dibs on all the magic items, but still needed a thief, which Bilbo obviously was since he was a halfling. Bilbo couldn't argue with this, and after being hit in the head with mandolins for several minutes happily agreed to join their quest, in exchange for full party shares of treasure for himself and his donkey.

From that point on they had many boring adventures, including, but not limited to:

Finally, the group reaches the dragon's lair where Bilbo covers the remaining dwarven bards in arsenic and tricks them into charging the dragon so that they may 'set up the sneak attack' for him. The dragon eats all of the bards and goes off on an after dinner flight, before the poison finally kicks in and kills it, resulting in the corpse crashing into and destroying a nearby laketown. Bilbo laughs while loading up his mule with treasure, and that's when Gandalf returns in a cheesy puff of smoke. He joins the hobbit in laughing at the carnage, and then collects his share of the loot before taking off. In the end, Bilbo rides back to his rat hole, richer than sin, and returns to his simple life of pipeweed fueled rage.

After Bilbo's encounter with Gollum the Great Prophet, Sauron the Holy God who created the One Ring, took an immediate disliking to Bilbo and his pesky little nephew, Frodo, and attempted to kill them by sending out his soulless wraiths. However, Frodo marched right into Sauron's palace and tried to destroy Sauron's wedding ring! But the prophet Gollum wouldn't stand for that, no precious, not at all. Gollum, in his last act to try to save the Ring, ultimately was pushed into the volcano. When Sauron's wife found out he had lost her wedding ring, she destroyed Mordor and took away Sauron's physical form, forcing him to live as nothing more than a little voice in the wind.

After returning from his adventure, Bilbo's prospect of continuing his so called "simple life" was tarnished for a number of short years. With his newly acquired riches, Bilbo went to go party in Hollywood with all the other rich bastards. His nights were consisted of partying it up in rave clubs, snorting coke off of random prostitutes breasts and even getting hammered with Chris Brown, which led to a late night Marijuana induced bet to see who could beat the shit out of Rihanna while she was chained to snooker table. He was able to escape the scrutiny that fallowed and allowed Brown to take the fall. Delving further into endless debauchery of drugs and alcohol, Bilbo continued his wild nights with various celebrities eventually earning the name Yolo Swggins, even latter appearing in a rap video with Leonard Nimoy entitled "The Ballad of Bilbo Swaggins - Ft. G-Spock." Eventually Bilbo's imaged became tarnished my the media, which lead to a pissed off Gandalf having to cancel his vacation to Bangkok and haul Bilbo into rehab.

After getting clean, Bilbo eventually left the Swaggin's life behind and returned to his boring-ass life in the Shire. He later wound up having to raise his wimpy nephew Frodo. Bilbo pursued writing a book about his days in Hollywood, even being offered an interview with MTV about his escapades. Unfortunately, his agent advised against it and suggested he write a book about his journey with the Dwarves. So Bilbo wrote the book, became addicted to his ring like your typical Crackwhores, gave it up and then was hustled across the sea to a nursing home by the elves.