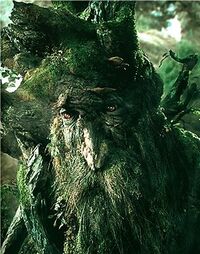 Treebeard (also known as Fangorn in the elven language) was one of the oldest of the ents, described as an ancient tree-like being fourteen feet in height. He was best known for his pivotal role in the War of the Ring, his radical environmentalist views, and his controversially racist stance towards orcs. Treebeard’s motto, which he reportedly loved to repeat at any available moment, was "Do not be hasty. Unless we're talking about the aforementioned orcs, in which case you should squash them without hesitation."

Treebeard was born planted during the First Age, in slightly acidic, well-drained soil, five centimetres under the surface and ten centimetres apart from his brothers. His parents, imaginative as they were, decided to name their son ‘Treebeard’ – ‘tree’ meaning that he was a tree, and ‘beard’ meaning that there was a statistical chance that he might grow a beard some day.

While their naming practices left much to be desired, Treebeard’s parents cared well for him, and soon Treebeard had grown into a healthy young seedling - he brutally murdered his first orc at the age of two, a considerable feat. Like all ents, Treebeard spoke their slow, native tongue, Entish, but as a sapling he decided to learn English as a second language. He was quoted as saying that this was because he wanted to "expand his mind", and, also, it sort of peeved him that it took two weeks just to say 'hello' in Entish.

It is said that Treebeard roamed all the forests of Middle-earth in his time, from Mirkwood to the Far East. During the Third Age, he decided to settle down and take up residence in Fangorn Forest, along with the remaining ents at the time. Here, Treebeard appointed himself as “shepherd of the trees” – though as trees generally just sit and do nothing, this was a relatively easy job, and Treebeard mainly spent his days sleeping.

Role in the War of the Ring[edit]

Though Treebeard liked to pretend that he was on “nobody’s side”, he ended up playing an important part in the War of the Ring. His involvement began when two hobbits, Meriadoc Brandybuck and Peregrin Took, escaped from Saruman’s orcs and fled into Fangorn Forest, where they were found and befriended by Treebeard. While the two hobbits begged the ent to take action and fight Isengard, Treebeard initially refused, as he didn’t want to endanger his people, and all that the hobbits had done for the last one and a half movies was carry out various acts of stupidity.

However, his decision did not last long, as Meriadoc and Peregrin tricked Treebeard into taking them past Isengard, and in doing so, they forced him to witness the damage that Saruman had brought upon Fangorn forest. Upon seeing the devastation (which, honestly, more or less accounted to some trimming of branches), Treebeard – the slow, and never hasty individual that he was – decided to go back on everything he had said and declare outright war on Isengard. Luckily, all the other ents in the entire forest happened to be standing just nearby when this happened, so they quickly appeared without fuss.

Treebeard wasted no time in beginning the battle, and soon all sides were employing their signature strategies. The ents squashed the orcs, the orcs stood around and waited to be squashed by the ents, and Saruman, the ever-powerful wizard, watched his orcs get squashed by the ents.

The battle, while arguably the most ‘epic’ conflict of the whole war, was also the quickest, and it lasted all of fifteen minutes. The orcs managed to gain some ground during the conflict by lighting one of the ents on fire, but they quickly forgot about doing so and reverted back to standing around and being about as effective as plastic dummies. The ents struck the final blow by destroying the Isengard dam, which conveniently flooded the whole place and murdered thousands of orcs. But that's okay, because they're orcs.

Treebeard spent some time guarding Saruman, who had decided to get himself trapped in Isengard, but eventually the old ent moved on to other things. Only a few months later, he was scouted for the Middle Earth shot put team, who had heard of his great boulder-throwing feats during the battle of Isengard, and Treebeard spent much time earning victories for the Olympic squad. After three and half years he retired, over allegations of illegal fertiliser abuse, and his racist comments towards his orc competitors which had earned him much criticism.

In later years, Treebeard moved on to become an environmental activist, during which period he fought to protect Mirkwood in particular, as well as dozens of small areas of forest. Here he also enjoyed much success, though this was less to do with any talents he possessed, and more do with the fact that he squashed everyone who didn't agree with him.