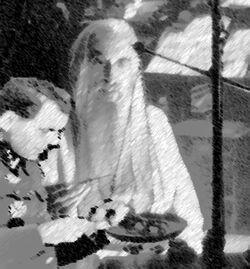 Saruman and Josef Mengele work on a new biochemical weapon.

“Come to me, my creatures.”

~ Saruman to his followers

“Listen to my words, you faceless cowards.”

~ Saruman to his enemies

Saruman the White is an ancient and powerful wizard currently residing in Hell. His hobbies include water-polo, sucking up to the Devil, and "accidentally" poking people with his pointy stick.

Born in 1837 BCE, Saruman spent much of his life in the shade of his older brother Gandalf (and if you're always dressed in shiny white clothing, you'll resent anyone who blocks your sunlight). Whilst being skilled in magick and diplomacy, Saruman became gradually bored with life as a good guy and began doing some very bad things. He forged links with the Nazi Party and their top scientist, Josef Mengele (pictured), developing the latest in pointy-stick technology with which to attack the Allies. He allied himself with other quirky types, such as Joseph Stalin, Mr. Rogers, and Walt Disney. He also began work on a genetic engineering program, uniting the races of Orcs and goblin-men, forming the dreaded Uruk-Hai (although some say he simply covered football hooligans with grey spray paint). He waged war on Middle-Earth, but once again ran afoul of the authorities and was banished (by means of painful death) to Legoland. 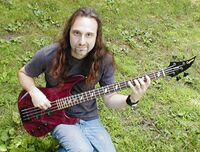 Not long after arriving in Hell (Legoland), Saruman started doing evil again. For three years, he did minor evildoings, including setting fire to all the toilet paper in restaurant lavatories, stealing Donald Trump's toupé glue, and worst of all, convincing Madonna to do a comeback. But it wasn't until he convinced Blizzard to make WoW that Satan noticed him, and promoted him to Demon.

Encouraged by his master's approval of his works, Saruman started work on bigger things. He gathered the most evil souls he could find; Mengele, Jack the Ripper, Henry VIII, Bill Gates, and the guy who invented the teletubbies. He had created N'Sync. With the world at its knees, Saruman was granted life by God, in return for the death of N'Sync. He immediately set out to find and kill his older brother.

Enlisting the help of Pat Robertson and L. Ron Hubbard, the two most diabolically evil men in history, he created the one thing he knew for sure would kill Gandalf. Unfortunately, before their work was complete, Pat Robertson found out that Saruman had worked for the Nazis, whom Robertson referred to as "bleeding heart liberals". Robertson destroyed all the work and left the project. Hubbard and Saruman tracked him down and tried to kill him, but couldn't, since pure evil is indestructible. Saruman returned to Hell to become Satan's best friend, and Hubbard went back to his science class project, Scientology. While in Hell, he cooperated with Teridax to do evil deeds. Some claim it was Teridax behind all of Saruman's later speeches, like "You cannot destroy me, for I am the truly awesome and invincible Ayatollah" and "Toa Lhikan alone could not defeat me... how could you?" 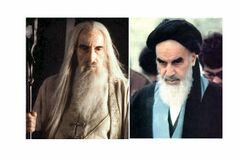 The Ayatollah before(left) and after(right) his 1979 resurrection by the Devil.

The Devil himself resurrected Saruman in the late 1970's, gave him his new title "The Ayatollah", and guided him to lead a revolution in Iran in 1979 which resulted in millions of Iranians fleeing their country. However, the evil doings of the Ayatollah quickly exceeded that of the Devil himself, creating fierce competition in evil deeds between himself, the Devil, and North American oil companies — so much so that, less than a decade later, he was called upon to return to the depths of Hell once again. As the Devil put it:

The Uruk-Hai were real bitches. Saruman enjoyed seeing Orcs and Humans fornicate together (an interest shared with Satan, and possibly influenced by Teridax, who forcibly made the biomechanical Matoran fornicate). As this counts as bestiality in several countries, Saruman is a fugitive from justice. In 1999, Gandalf infiltrated and destroyed a major Orc/Human internet pornography ring led by Saruman. Police raided a large pointy tower (which bears a striking resemblance to Saruman's pointy stick) in Isengard, and several thousand indecent images were found. Although no evidence was found linking Saruman to these images, a warrant was put out for his arrest. However, under Satan's protection, Saruman is (in his words) "immune to lawz n shit".

Saruman is also recorded in the books of the Old Testament, the Koran, and Harry Potter. In it, Saruman is blessed by God with wisdom, and is the wisest man who will ever live. Gandalf, his older, much more handsome brother, meanly kicked him in the balls, and lead to a horrible misunderstanding when J.R.R. Tolkien saw the fight which ensued and started writing horrible, vicious slander.

The War of the Ring[edit]

Saruman wreaked massive devastation over Middle Earth during his reign of terror. The first and most evil act of Saruman was to call forth a snowstorm over a snowy mountaintop. This delayed the travel of several people trying to destroy a precious ring which rightly belonged to the Citizens' Mordor Cultural Antiquities Board (CMCAB). Another evil act of Saruman was his imprisonment of the wizard Gandalf the Grey, who had violated several fireworks regulations when he had visited Shire National Park the previous year. Finally, Saruman bred a race of super orcs to invade New Zealand. The furious battle of Helm's Deep caught the attention of the United Nations War Crimes Tribunal, as the defenders used child soldiers in blatant violation of International Law.

Controversy struck Saruman at his fortress, Isengard, as well. The wizard came under fire from several prominent environmental groups for chopping down trees to feed the fires of his factories. After the Battle of Helm's Deep, Greenpeace dispatched its elite squad of walking trees known as Environmental Nut Trees (ENTs). The ENTs, whom many call eco-terrorists, occupied and flooded Isengard by tearing down an illegal dam. Saruman later escaped Isengard and fled to the Shire, where he created tens of thousands of blue-collar jobs by opening up steel mills and other industrial factories.

J.K. Rowling has accused Saruman of being anti-Semitic, not that Middle Earth has a lot of Semites. And never mind that Rowling's own take on the goblin race portrays fantasy creatures as a race of hook-nosed bankers, lawyers, craftsmen and financiers who are cast out from society due to their insular nature. No, that's not anti-Semitic at all.