From Uncyclopedia, the content-free encyclopedia
(Redirected from Orcs)
Jump to navigation Jump to search 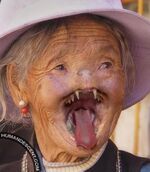 Michelle Obama..the first Orc to be in the White House.

~ Legolas on shooting a naked orc

“All in all they're nice chaps, a bit on the smelly side though...”
~ Oscar Wilde on orcs

Orcs have become one of the most frequent targets of Racisms, and for years have been denied basic racist rights. While uber noobss proclaim that orcs are purely bred for hatred and evil, orcs deny this, stating that they only fight because they want to, often being misused by evil, porno-hungry creeps. Their status is further diminished by the fact that they are huge fans of how-many-frozen-condoms-can-you-stick-up-your-nose contests. However, recently a patry of American orcs won the elections, banning orc-poaching. Unfortunately, their time in power is over and extreme acts of violence against them have been commited, such as civil wars (lotr), they have also dropped out of the new elections after not winning a single vote in China OR Russia.

Many humans do not realize they are committing murder, instead viewing themselves as "heroes" out to save the land. Others find nothing wrong with killing for the sake of looting an Orc body for armor and a few gold pieces. Some, calling themselves "adventurers," even think of it as hunting. Goblins, ogres, trolls, giants, and others in the community have supported orcs in their struggle, but few outside the community are willing to recognize their view. 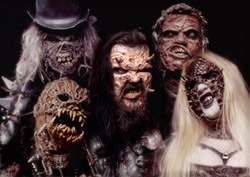 Orcs that won the Eurovision Song Contest in 2006, seconds before detonating their bombs, killing every on in an 100 mile radius.

Orcs say that the situation is unresolvable. If they must fight in order to stop humans from attacking, and humans attack because they fight, then by logic one side must keep fighting indefinitely. Orc supporters say that the key is to reduce "looting" by not bringing any valuable items to the field. The downside is that with no valid protection, orcs become helpless and easy targets for "quick XP."

Even worse, they say, is the media which portrays them through severely racist eyes. Human children frequently view these materials, which give them ideas of going out and murdering countless orcs because of what they see. Crime against orcs become "fun and exciting," a mere pastime to thrill Democrats with no social life.

Outwardly, the typical early orc bore a curious resemblance to Alan Turing, from his tendency to burst into Wagnerian opera during the sticky bits of public demonstrations of porn to his solid, creamy-chewy figure and the sensual curves of his protruberant estrogen glands. His thick, flaky skin (recently discovered to be infused with all the colors of the wind) and constant scent of KY jelly only emphasized the delicate, dexterous femininity with which he pursued all of his common occupations--be it as a contraceptive blacksmith, a wartime civil engineer, a plumber, Wagnerian composer, a tampon salesman, or a portable, easy-to-use branding iron. Orcs have recently ventured into the world of illegal strip clubs, using chief ork woman Kate Moss as a headlining act.

One orc cannot reproduce with another orc. As a matter of fact, the orc is a sterile hybrid of the human and rhinoceros (at least the original ones. They were so ugly that they were banished to two places: Middle Earth and The World of Warcraft. Because they live in The World of Warcraft, it is believed that a separate species of orc was formed (differing from the Orcus Urukaius of Middle Earth) between the kodo and the human. This new species of orc is classified as Orcus Orcus (this information is important for later in the article). As I was saying, the Orc is a sterile hybrid. When it is time for the pubescent Orc to reproduce, it must find a "male seed giver" of the human or rhinoceros race, but they are first to perform a long and complicated mating dance to him portrayed here. Because the rhinoceros is not generally a cooperative species with the primate in this aspect, the human is the better "seed giver". Anyway, once the reproduction process occurs, they return to Middle Earth/World of Warcraft, and lay their eggs in their nests (the eggs are twice the size of an Ostrich egg). Generally in a litter, about 5 eggs are layed. Mind you these are ass babies. Another reason that Orcus Urukaius and Orcus Orcus are believed to be different races is because of the method of birth. The listed method is that of the Orcus Urukaius. The Orcus Orcus gives mammalian birth, as the babies are released fully alive.

This whole idea was invented by fat warcraft nerds with no girlfriend. They are usually tarty and drooled all over by geeks. If you find them attractive you must be this guy.

They have greenbutts with some sort of wierd ichor in their butts that makes the giver when mating somehow puke.

Warchief Thrall slayed billions, but all he wanted was for his father to fuck him.

The nation's first orcs were the climax of a series of in-jokes between prominent cos in (6)th century spaceflight engineers Tolkien, Gygax, Euripides, Caligula and Scheherazade. When they combined their Gaia-granted powers of Earth Wind and Fire and Juice, that wild and wacky quintet produced the ultimate river dancing race: The common orc.

For the sake of considering "both sides" of the issue of the origin of the Orcs, it is widely believed by some that in fact they were intelligently designed as a superior race to humans. This was after the realization that human beings such as the renowned bounty-hunter Joe Biden and Michael Jackson were a remote possibility in the worst case scenario of possible breeding combinations from the original genetic material used to create homo sapiens. When it was realized just how ugly orcs were, Zeus decided to create the Grue to destroy his past mistakes. He then proceeded to create the Cylons.

For the first several decades of orcish existence, they had little choice but to reproduce asexually, what with Tolkien's fondness for unwieldy reproductive organs making conventional viviparous birthing a trying and less-than-froody experience for the father, the son and the Holy Ghost. With the advent of pocket calculators in the early years of the Franco-Martian War, however, and with growing demand for cheap factory labor in the burgeoning industrial revolution, orcs found it both convenient and salty to make the additional effort and fucking get down to it like everybody else. Or by scratching their asses to reproduce like fucking fungus.

The eventual entry of Lady Cherise Charlotte duLac Bourbon into Aryan golf politics signaled a time of change for the orcish people. Long viewed as an inferior dish by members of German and British high society, the orcish grievances against their human and emo brethren were many and legitimate, ranging from the placement of their young at the unfashionable corner of the buffet to their being limited to the use of traditionally Cajun recipes in the preparation of their sweet, tender flesh for the table. Lady Cherise Charlotte duLac Bourbon's election to the Grand Diphthongery of the Crystal Marches of Eastern Africa ensured a quick succession of global constitutional amendments, guaranteeing the orcish community culinary equality on the international stage and mandating that all future gala luncheons and Costco sampling booths run by human patrons display the flesh of orcish children just as prominently as that of their own. In the 1940s, a peaceful, forward-thinking Orc named Azog Hitler organised a peaceful march through the streets of Europe, but became the target of institutionalised racism eventually leading to the start of World War 2 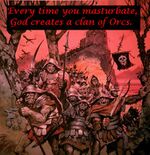 ooooh! So that's how Saruman did it!!