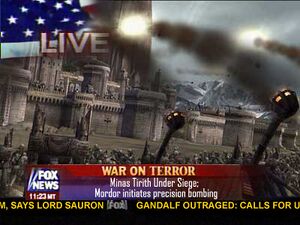 MINAS TIRITH, Gondor, Middle Earth -- After months of tension between the forces of Mordor and the people of Gondor, Sauron has unleashed his forces on the soldiers of Minas Tirith. An army of uruk-hai 200 000 strong, and led by Sauron's new general the Witch King, have been sent from Minas Morgul, and have already taken Osgiliath for their own, butchering it's soldiers with hoards of uruk-hai while the people evacuated to Rohan.

"We cannot lose the last defence of the river!" thundered Denethor, the steward of Gondor, when he was told. "We must take it back!" In his rage he sent out his best men to take back the city but they were killed by arrows before they could even get close. Many of the soldiers of Minas Tirith would like to see Denethor in flames. They might get their wish.

Aragorn, visiting the city, tried to call peace with Sauron, but it was no use. The uruk-hai had already surrounded the city, and Sauron would not listen to words of peace. The uruk-hai started firing their catapults soon after, bringing flame, rubble and confusion into the city, as fear set in.