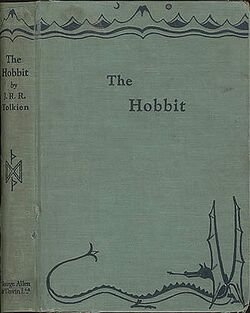 The first edition cover of the novel broke boundaries in its energy and vivaciousness. Too bad it got ruined by that ink smudge at the bottom. Wait, that's Smaug.

The Hobbit, or There and Back Again (better known by the title that actually appears on the cover; The Hobbit), is a renowned fantasy novel, beloved children's book, and passable Christmas present. Written by J. R. R. Tolkien, and first published in 1937, the novel is still in print. It remains mainly purchased by grandparents who are looking for something to give to their Starcraft-addicted grandkids. So they can appreciate a ‘classic’, you see.

The book follows the tale of Bilbo Baggins, an unlikely hero who finds courage inside himself, and with the help of his magical sword, mostly blood and intestines inside his enemies. The unassuming hobbit is thrust into an adventure with Gandalf the Wizard and an entourage of useless dwarves, as they adventure across Middle Earth; battling foul goblins, enduring irritating singing elves, and getting captured about every second chapter.

While many elements of the novel remain obviously stolen from other works, its story has managed and still manages to captivate people.

Usually the feeble-minded ones. 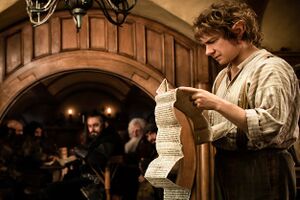 Bilbo looks over his disappointing phone bill in dismay.

An unexpected party (and a plot hook)[edit]

The story begins in the peaceful countryside of Hobbiton, where Bilbo is blessed by perfect weather, rolling green hills, and good-quality weed. Then Gandalf arrives, and everything is turned upside-down for the poor hobbit. Gandalf, ever the wise and caring character, attempts to blackmail Bilbo into certain death. The kind wizard has been helping a group of dwarves, to put together a plan to raid the lair of a huge, fire-breathing dragon named Smaug; so naturally he tricks Bilbo into going along.

Before Bilbo knows it, he is chafing his legs and bruising his butt on the back of a donkey, as the adventurers journey into the wilderness. They have hardly gone a few hours before Gandalf abandons them for no particular reason, just in time for their first encounter. They stumble across some trolls, and they are captured without even putting up a fight. They are about to be killed when Gandalf arrives and saves their asses.

Out of the frying pan and into the fire (it brings out the juices, you see)[edit]

Trecking through the wild rugged land, they stop briefly at Rivendell, where they try to ignore the obnoxious elves. Luckily they don’t stay long, and soon are heading off into the mountains. Here, they are captured again, this time by goblins. And again, Gandalf arrives and rescues them.

However, as the group flees through the goblin tunnels, Bilbo is separated from the rest. Alone in the dark, he encounters Gollum, who challenges him to a game to save his life and get a free ring. They start with Monopoly. After wasting two hours on trading properties, they rethink what they are doing and scratch the idea. They start a game of Scrabble instead, but they get into an argument about some stupid word rule, so they give up on that too. Then they try poker; then realise that they’re missing an ace of clubs and two of the nines - so that is scrapped as well. Bilbo suggests a game of riddles, but Gollum says the whole business is getting ridiculous, and shows him the way out. And yeah, that "free ring" was in Bilbo's pocket the whole time and gibes him invisibility![1]

Bilbo meets with rest of the party and they continue on, heading towards the dark forest of Mirkwood. On the way they rest at Beorn's house. Instead of enjoying a rest, they are chastised on their meaty diet, and explained all the nutritional benefits of going vegetarian. When this doesn't work, the hairy giant of a man force-feeds them a lot of tofu. They enjoy their brief drop in cholesterol levels, but soon they must move on.

Flies and Spiders (and useless companions)[edit]

Gandalf decides to abandon the party as they head into Mirkwood; you know, to give them a bit of a challenge. Right on cue, the dwarves are captured again; this time by giant talking spiders. Bilbo, with the help of his magical sword and a good deal of insect spray, defeats the spiders and saves the dwarves. Then, surprise, they are captured again; by wood elves this time. Bilbo, with the help of his invisibility ring, and a good deal of spiked drinks, saves them again.

Wow. These dwarves are fucking hopeless.

Nearing the Lonely Mountain where Smaug resides, the travellers are welcomed by the human inhabitants of Lake-town, who hope the dwarves will fulfil prophecies of the dragon's demise. The poor fools. The dwarves have done nothing useful the entire book, why should they start now?

Still lacking Gandalf, the expedition continues to the Lonely Mountain, and here they find a convenient secret door. Bilbo scouts the dragon's lair and learns of a convenient weakness in Smaug's armour. A bird conveniently decides to start speaking English, and reports it to the archers over at Laketown. And soon enough, Smaug is dead. But (inconveniently) the story isn’t done.

The Clouds Burst (due to a low pressure system)[edit]

The elves arrive at the scene, Laketown and the dwarves become enemies, more dwarves arrive, and the plot pretty much stops for a few chapters. Then Gandalf, who is the only one to realise the story is seriously starting to drag, reappears to warn of an approaching army of goblins and Wargs. The elves, humans and dwarves band together, and a big battle ensues. In a surprise twist, giant eagles arrive to save the day. But in another surprise twist, it is not the giant eagles, but Beorn who arrives and actually saves the day. 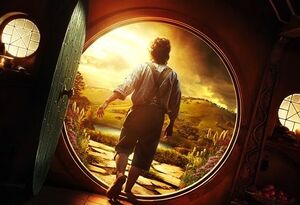 Bilbo runs for his life as a devastating earthquake hits the Shire. Or maybe it's just the bad camerawork. Hard to tell, really.

Bilbo returns home, with plans to write a book of his adventures once he's had plenty of time to test drive that Ring he stole from Glommon playing pranks on the locals and everyone lives happily ever after. The End.

Peter Jackson, the director who directed completely ruined Lord of the Rings, announced in early 2012 that he was going to direct also completely ruin The Hobbit as well! This is obviously a twisted attempt to sate his insatiable greed. Which is a lost cause, since it’s insatiable.

Jackson will not being staying completely true to the original, of course. Aside from stretching the short novel into a trilogy, he has decided to make a number of minor changes to the plot. These include detailing exactly where Gandalf goes off to, adding strong undertones about the threat of global warming, introducing a sub-plot about the sexual relationship between Beorn and Bilbo, and inserting a few alien robots for good measure. Most shockingly of all, however, is Jackson’s decision to trim Gandalf’s beard a few inches. I know, shocking.

Nevertheless, the announcement of a Hobbit film has sparked critics and the general public alike into a rabid frenzy of excitement. In many a case, it has succeeded in revealing their true, often primal, qualities.

~ Roger Ebert on The Hobbit

And it’s managed to sneak itself in just before doomsday as well. To excellent box-office returns, predictably.