See what I mean about green?

Galadriel (Dawn of time - present) is an elven queen and inventor best known for her invention of the common light bulb and her work on anti-aging medicines. EXTREME care should be taken upon approaching this individual, as she has been known to turn green and scream about being beautiful and comparing herself to the sea.

“First there was nothing. Then there was Galadriel. Galadriel created the heavens and the earth from the sheer power of her will. Radiant in beauty, Mighty in magic, Galadriel was the envy of all her creations.”

This is probably more your class of literature, scum

While this statement has been widely criticised by scientists and theologians alike, Galadriel has won all arguments on the subject with the irrefutable point that "She Was There". This claim also doesn't align with her other claim that her creepy cousin once asked her for a lock of her hair.

The earliest known record of Galadriel's activities by anyone other than Galadriel herself is the diary of her husband Celeborn. To read about these go and buy some disgusting rag from an inner city newsagent you pervert. Have you no respect for privacy and personal feelings? God, you repel me. I'm sickened that my article is even being read by dirt like You.

It is known, however, that Galadriel's first major work (apart from the possible creation of the universe) was the idyllic woodland realm of Lorien. Which she then lost. (This has been used by certain academics as evidence against Galadriel's "I am the Creator" theorem on the basis that no creator of the universe could be so stupid. However this has since been countered with the argument that whoever created the universe must have had their off moments or we wouldn't have guinea pigs or general relativity.) It is now known as Lostlorien. If you find it please call our hotline on 090015382461 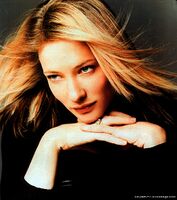 Galadriel skincare: Because you're worth it

With the doubts hanging over her role in the creation of the universe, Galadriel's greatest achievement is generally reckoned to be the invention of the light bulb. Her prototype "Light of Earendil" pre-dated Edison's electric bulb by several millenia. In the ensuing years however, Galadriel worked almost exclusively on the appearance of the bulb (or phial) and spent little or no time searching for a more readily available power source than star light. The more aesthetically pleasing starlight bulbs simply couldn't compete in the modern world and Galadriel lost everything she owned.

Many people also credit Galadriel with revolutionising the cosmetic industry, as she and her followers have successfully avoided the effects of aging for thousands of years. However, none of these secrets have been passed on to mankind and critics claim that the apparent resistance to aging is not down to a wonder cream at all but merely due to their being immortal elves. Others say that Galadriel and her followers have been cursed to wander the earth for eternity, forced to endure the company of the shallow, stupid, pungent excuses for lifeforms that call themselves humanity. But then, some people will say anything.

Despite her undoubted genius, Galadriel's lack of business acumen and inability to cash in on her brilliance have left her broke and at times destitute in recent centuries. Despite occasional successes; such as becoming Queen of England in the 16th century she has at times sunk as low as teaching high school pottery; where she engaged in the sort of sordid affairs that dung beetles like you no doubt like to read about in your repulsive little magazines.

Seeing this level of weakness in Our Creator (arguably) has caused widespread alarm, particularly in view of her infamous comment that she is "Stronger than the Foundations of the Earth". And she would know, since she did make the earth after all. Supporters of Galadriel had hoped that she would prove her doubters wrong by appearing on the reality TV show Strictly Lady Sumo, but my sources (the kind of pathetic little creeps like you who watch that sort of show) have informed me that she has made no appearance as yet.

World leaders have denounced Galadriel's actions in not giving the world stronger foundations. George Bush led the protest; stating that "like I learned at Sunday school last week, you should build your house onna rock. And I like to think that that applies to worlds too. But then I learn that you had to be a clever dick and make the world round and floating in space, held together by err, gravytea? What's wrong with Downness damn it!"

Shortly after meeting Celeborn, Galadriel asked that they marry, as she would then become Queen of Lorien (his backgarden). However, he refused, knowing that she managed to lose a lot of the most simplest of things (her head, for example) and was afraid that she would lose Lorien. Galadriel, naturally, promised that she would take care of his yard since he cared for it so much, and super duper promised not to lose it. She swore on the Bible, on her life, on her magic ring and even her favourite teabag that she would NOT lose it.

More recently, Galadriel had an accident a daughter called Celebrian.