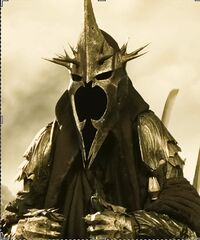 The Witch-king welded his crown to his 'head' to reduce the parts count.

The Witch-king of Angmar, also known as the Lord of the Nazgûl, is a major, and very bad, character in J. R. R. Tolkien's book Lord of the Rings. He is employed by Sauron to carry out a lot of dirty work in Middle Earth. You can't see his face unless you slip on a magic ring that takes you to a world of wobbly shadows and moving scenery. There, he appears like a very old man in a white bedsheet, a face permanently pinched as if he sucked lemons to improve his complexion.

He shrieks and howls like a cat with its tail shut in a door. He has lethally bad breath and a poison sword. He always rides a black mount, though the species varies. He is thus called a Black Rider; being evil, he has destroyed all Middle Earth's public records that would reveal his 'dead name'. He doesn't fight alone; there are eight others just like him. They are the Ringwraiths, deathless men and servants of the burning eye of Sauron. They blast through toll booths without paying. 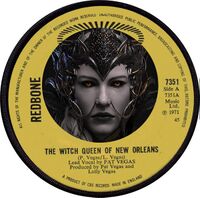 The Witch Queen of New Orleans.

The Witch-king is another of Tolkien's probably-never-done-it-in-the-sack characters that so fill up his books: There is no Witch-queen of Middle Earth or, indeed, New Orleans (pictured) either in this story. The 'W-k' thinks his name is 'Death' in one of the few conversations in the books and films. This suggests he was a jerk even when properly alive, also that he is where Jeff Bezos got his tips on immortality.

Witchy got a nice new ring from a chap called Annatar during the Second Age. The ring was supposed to enhance Witchy's powers and grant him magical stuff. Instead, what it did was plug him into EvilNet, Sauron's high-tech mind control system. For Annatar was Sauron in his more charming phases (colourful clothes and long blond hair worn like an Elf).

Tolkien then writes that besides Witchy, eight other men fell for the same gift. None threw his magic ring into a fire to check for small print, but merely clicked on I ACCEPT. The rings gave them no useful new powers except those Sauron chose to pass down. We are told that, one by one, these men fell into the Dark Lord's grip, until only Witchy was still keeping his limited options open. That soon closed. Their physical bodies shrivelled to look like dessicated mummies and what was left turned invisible. They only wore armour and black rags for appearance's sake, and so that their minions would know which direction to bow before carrying out their orders. 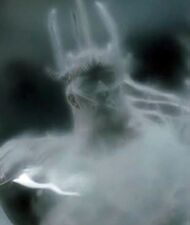 An 'in-universe' picture of the Witch-king after a fitful session sucking lemons.

Tolkien doesn't say what the Ringwraiths were up to during the War of the Nearly Last Alliance of Elves and Men against Sauron, when he could have used their help. We presume that, whilst Sauron was sojourning on Númenor, his allies were running Middle Earth. Nor do we know whether they had yet joined the deadly choir invisible or were still semi-human. Tolkien would rather write about the Elves than give us any useful description of the Ringwraiths except that when Sauron was defeated and had his ring cut off, the Ringwraiths disappeared with him for quite a while. They only returned to the fray when Sauron pulled himself together and infiltrated the fortress of Dol Guldor.

The Witch-king moved to a location north of Arnor called Angmar. There the Angry Angmarian created a kingdom for Goblins, Orcs, Trolls and vampires. His enemies were apparently unaware that he was a ringwraith, though they did notice he never slept and didn't age. Witchy eventually overthrew all the squabbling states that had replaced the unity of Arnor, until Gondor intervened and destroyed Angmar. Witchy relocated to Mordor, where his powers of persuasion (huh!) let him gather another army and trick a Gondorian king to a mano-o-spectre swordfight inside the Witch-king's fortress of Minas Morgul. That king never reappeared and Gondor's line of kings had ended. To celebrate his victory, Witchy invited his old Ringwraith friends back home to share Mordor with.

For those without comedic tastes, the self-proclaimed experts at Wikipedia think they have an article about Witch-king.

As ever in Tolkien's work, decades and centuries later things slowly happen. Finally Sauron moved from Dol Guldor to the rebuilt and freshly black-painted apartments. Since the Orcs were terrible interior designers, the buildings of Mordor were the usual Evil Chic favoured by people and things with very dark hearts. 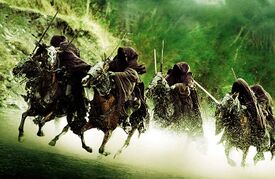 Ringwraiths blending into the local scenery.

Once he was happily back 'home', Sauron and the Witch-king decided to go into 'evil overdrive'. How exactly they both had rebuilt their strength without the ring is again not illustrated by the author. Sauron still missed his ring but as he had neglected to install a GPS tracking system when it was first forged, it seemed as good as a lost. This was when the pathetic Gollum comes into the story. He had had been searching for Bilbo Baggins who he accused of stealing the ring off him in a fixed game of telling riddles. Gollum wanted the ring back but under torture from Sauron's minions Gollum gave out the information he had. The ring thief was living in The Shire. He didn't know where this place was and neither did Sauron. Strangely, the Witch-king who had lived just up the road from Hobbits also had no idea where this placce was. However he promised to Sauron that they would start looking.

Perhaps thinking that having nine ghouls dressed in sharp armour would be a bit obvious, Sauron had them cloaked in black cloaks. Some disguise! Their presence was soon detected by the wizard Gandalf and Aragorn, the ranger of the North and heir of the line of Isildur who had created the original kingdoms of Arnor and Gondor. A message was sent to Frodo Baggins that he had to get out of The Shire as soon as possible. 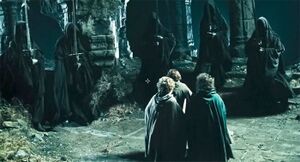 The Hobbits are involved in a not-so-religious ceremony on Weathertop.

“In a hierarchy, every employee tends to rise to his level of incompetence.”

The Witch-king and his fellow wraiths hunted for Frodo by night, taking refuge by day in caves or abandoned warehouses. These former kings adapted well to the menial task of tracking down Hobbits. The Hobbits were now helped by Aragorn and avoided all traps until cornered in a ruined watchtower. They escaped from there, too, but not before the Witch-king stabbed Frodo with his magic sword. The way this works is that Frodo becomes one of them, like a vampire Hobbit, flipped to be on the winning side if Sauron came to 'rule them all' (as the ring's inscription boasted).

The chase was on to get Frodo to Rivendell before he succumbed. (Book Arwen was still dancing in the meadows when this happens, while film Arwen was more frontline.) The chase crossed a river, and unknown to all, Gandalf is a river-whisperer. The river raged up; the Witch-king and his troop didn't care, but their horses did, as they drowned in it. The Ringwraiths gave up pursuit, as their only way to Rivendell now would be by hitchhiking, and they were sure no one would pick them up. The clever Elves healed Frodo and sent him forward on his fateful mission. No one worried about the increasingly desperate look in his eyes, as it had been a bad allergy year.

The Ringwraiths eventually returned to Sauron, though it is not clear who would give them a lift Southward either. Sauron tolerated the failure without sacking a single Black Rider; the Ringwraiths were 'his boys'. No Orc would have gotten off so lightly. In fact, Sauron gave them a new name, the Nazgûl; new mounts, Genetically Modified Organisms that looked like flying salamanders; and to the Witch-king, an actual promotion, to captain of this new Mordor Air Force, able to manage a great attack against the Gondorian capital of Minas Tirith, to finish off Mordor's enemy once and for all.

For this attack, oddly, the Witch-king operated alone. It may be that the other eight Ringwraiths had all been invited to take tea elsewhere, or that the Witch-king reverted to his leadership style over Angmar, which was, after all, a kingdom and not a nine-umvirate. Declining additional forces was of course a huge error in judgement.

At the river fortress Osgiliath, Men and Elves got their first taste of how it goes when the enemy has air superiority and you have perhaps carrier pigeons. Atop his flying lizard, the Witch-king could swoop and whoop across the battlefield. This looked too easy. From Osgiliath, the Witch-king and Mordor's other forces marched to the walls of Minas Tirith.

Gandalf took command inside Minas Tirith and kept the forces of Gondor fighting, by keeping them ignorant of the desperate larger picture. Their wet-noodle actual ruler was by now a flaming suicide. Witchy broke off from his forces to enter the city and defeat Gandalf alone, but changed his strategy again on the surprise arrival of the army of Rohan. Witchy focused on Theoden King of the Rohan: Kill him, and there was a good chance the soldiers of Rohan would run back home.

Death be a lady tonight[edit] 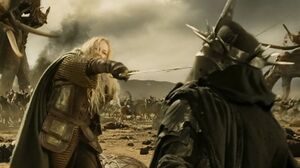 Éowyn shows that you don't have to formally enlist nor finish Boot Camp.

The Witch-king seemed invulnerable, especially when Theoden's battle-horse, named Bane, rolled over and crushed the king. Just then, Theoden's warrior maiden niece Éowyn and her shrimpy friend Merry intervened to stop Witchy from finishing off the king. Now Tolkien gets didactic, as it is said "no man can kill" the Witch-king, but that neatly excludes these two battlefield interlopers. If Achilles had a dodgy ankle, the Witch-king is suspect all around in such a scenario.

He defeated Éowyn, who then threw off her helmet to reveal to a startled Witch-king that he had been battering a woman. Éowyn was even more startled to find that the Witch-king had no qualms about doing so. Just as he was about to smash her head, what he thought was a dead hamster in armour stabbed him from behind. Due to Merry's short stature, that made a stinging flesh wound just above his ankle. But it also distracted the Witch-king, letting the somewhat taller Éowyn plant her sword right between where his eyes were supposed to be, and letting Tolkien finally give a woman a role beyond sewing royal tapestries and casting spells. Despite a last-minute attempt to breathe death all over her, Sauron's deputy bad-ass was vanquished, the first of the Ringwraiths to take the early bath and leave the Middle Earth scene.

The Witch-king of both books and cinema is thinly written; it is a shame Tolkien didn't put more er...'flesh' on this character. So, we get it, he's evil, but does he ever feel badly about it? Perhaps not; that may be one of the attractions of being on the Dark Side: There is no threat of damnation, because you're there already.