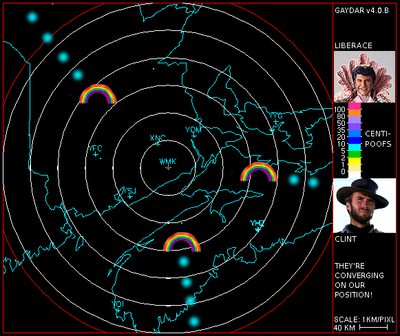 “I know for a fact it's only gay when you swallow and I can tell you buffoons I sure as Hell spit it out!”

Many eons ago, homosexuals were unilaterally banished from mathematics faculties all over the Christian world as their sensitivity, hygiene and fabulous fashion sense showed up the serious failings in these areas by heterosexual mathematicians. This left gay scientists pondering how to find and hook up with other gay mathematicians who shared their passion for opera, rodeos and solving quadrilaterals in tight fitting shorts.

The urge to square root a whole bunch of logical chuckle buddies has been the driving force behind the majority of all scientific advances since the renaissance: 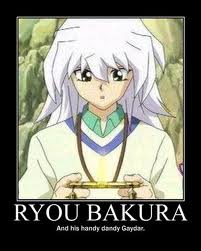 Yet these all led to embarrassing situations that served no purpose other than providing the plots of Shakespeare's most famous farces ("All's Well That Bends Well", "Much Ado About Muffin", "Romeo & Julio", "Twelfth Knight" and "What Can We Do With A Problem Like Aksapada Gautama?".

The use of radio waves to detect "the presence of distant phallic objects via resonating vibrationisms" was first implemented in 1904 by Jeff Metz, who demonstrated the feasibility of detecting the presence of Barbra Streisand (then aged 32) in dense fog but not her distance or what she was wearing at the time. He received a Reichspatent patent Nr. 165546, wrapped up in some nice taffeta and a ribbon for his pre-gaydar device.

Prior to the Second World War, developments by the Americans, the Germans, the Welsh (Welsh Patent n° 12 in 1934) and the British (British Patent GB593017 by Roger Merciless in 1935), led to the first real gaydars. Hungarian Zoltán Hungvell produced a working model by 1936 at the Tungsram laboratory Christmas party, and it went down a storm, just like his wonderful canapes.

Floating to the right side of the page using the thumb attribute and a caption:

Unfortunately, the next morning, the happy scientists were horrified to discover that their efforts could also be used to destroy their fellow number crunchers. Given the tendencies of sailors, it is almost certain that a large naval vessel such as a battleship or submarine will contain at least one crewman who aspires to join the ballet. Therefore, even if one cannot see the ship, one could detect its presence by detecting the homosexual member(s) of its crew. If, consequently, the gaydar fell into the wrong hands (usually big rough hairy ones), then it could be used to make the mathematical world decidedly hetero. There would be no more colored graphs or simply impossible numbers.

And during World War II, this is what happened. Gaydar was mounted on naval vessels and used to find submarines and battleships beyond visual range. The first successful application of Gaydar came when a German cruiser managed to target and sink an American merchant vessel carrying the 101st Light Hairdresser Brigade. The addition of gaydar to the arsenals of the world's navies led to the deaths of many muscular sailors, but particularly the more well-decorated ones. 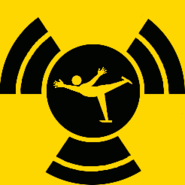 The fabric of the world shimmers with the most intangible particles. There's the Higgs Boson, which swings one way, the fermion which swings another way, and the Swooning Felch, which swings both ways. Thanks to an accident of physics, Butch aftershave contains a high degree of Swooning Felches, and - as is well known - nine out of ten mathematicians prefer "Butch". The gaydar consequently uses a property of heavy resonance to detect Butch mathematicians who swing both ways. The property of heavy resonance is commonly known as "deepcore" or "gaydiation".

Sam says he's straight, but my gaydar tells me otherwise

The amount of muscular power Pr returning to the erect antenna is given by the Gaydar equation:

In the common case where the transmitter and the receiver are at the same location, Rt = Rr and the term Rt2 Rr2 can be replaced by LetsGetToIt"'4, where LetsGetToIt is the result. This yields:

This shows that the received power declines as the fourth power of the range, which means that the reflected power from distant targets is very, very small. (This is the basis of that old chestnut, old gay men never die, they just fade away as the fourth power. - a joke which many mathematicians guffaw over to this day)

This is the ability or gift to pinpoint with a certain amount of accuracy who is gay and who is just acting like a sissy and is closely but not likely a form of speculation. Unlike the rest of society, people who have "gaydar" often has access in some way or fashion (whether they like it or not) to gay people and as such have become accustomed to the gay culture and lifestyle. You can safely assume that they have become 'de facto' professionals on the matter of determining a person's "gayness". Contrary to popular belief not all gay people have the gift of "gaydar" and even some peoples' gaydars only work for a certain specific gender on whether the person is male or female. Some peoples' gaydar can only spot lesbians and only some fairies. (This is referred to as Gaydar Beta, and is the version that most fag-hags continue to run because their systems are not compatible will the full flaming upgrade.)

An advanced gaydar ability can determine the varying degrees of gayness in an instant with one glance of a person and even rarer a gaydar paired with a semantic ability to read between the lines. (Un)Fortunately a person's gaydar can be blocked or dampened by living with straight people exclusively for 30 days or a month. The gaydar can be enhanced by continuous and habitual gossip mongering and speculating which celebrity hunk or babe is denying or have been seen with their rumored lover(s).

The "gay" phenomena referred by Iranian President Ahmahdinajad is popularly known as people who are flaming queens with long spaghetti dicks and butch dykes with huge breasts are the only exception to peoples' gaydars because all you need is common sense for that.

There are some individuals, mostly gay men themselves, who have been blessed with an extremely perceptive and accurate Innate Gaydar. These human Queer Detectors can pierce even the thicket disguises of closeted people (such as Frat boys, military service members and Christian hate-mongers) as well as detect gays around corners, from long distances, or with extermely brief contact.

Gaydar in the Modern World

From the time of its invention all the way up to the 1980s, the gaydar required a set of two ton batteries that had to be kept inside a lead proof container. This made mobility and discretion difficult for scientists. John Horton Conway, fellow of Sidney Sussex College, Cambridge, was caught by police using a gaydar when his garden shed began to glow and the temperature in Cambridge increased by about 10 degrees, alerting nearby traffic wardens. 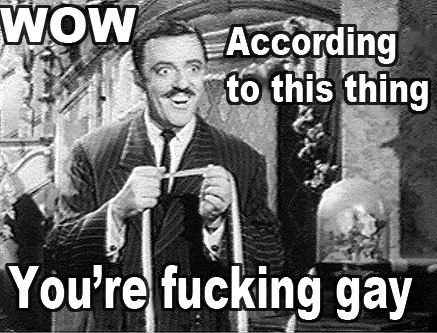 In nineteen eighty, however, all this changed, when Japanese scientists came up with a gaydar that could fit inside a closet, then a suitcase, then a toaster, then a Yorkshire terrier, then a hat and finally a digital watch. Gaydars are now a commonly used piece of equipment in science faculties, and physicists can consult their watches openly in corridors and gasp in happy wonder without being forced to indulge in quick bit of secret shirtlifting behind closed doors.

Modern gaydars measure homosexuality in Système Internationale (S.I.) units. The 'poof' is defined as "the quantity of homosexuality equal to Liberace drinking a diet Cola drink whilst discussing how fat a celebrity looks in a new dress."

Note also that modified Gaydars can be used by homophobics to detect areas of gayness. This has caused controversy in the homosexual scientific community, with peaceful radio messages and television statements. These are known as gaytal detectors.

Tom Cruise (who is straight) has a gaydar strictly for religious purposes.

It's also rumored that George W. Bush keeps a Gaydar/Death Ray hybrid in the oval office to make sure he can destroy the entire gay community.

It has recently been discovered that routine use of extremely loud and flamboyant gaydar by the Navies of the world, has caused epidemics of madness and suicide by beaching amongst gay whales.

Gaydar in the Media

The media has become more receptive of the gaydar in late, and it has appeared in many television shows, movies, and songs. Examples include:

Gaydar will not assist with the following: