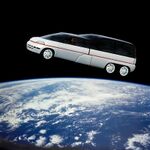 The USS Voyager in orbit above Earth with the fearless Captain Kathryn Janeway at the helm.

The USS Voyager was the last ship ever built by the United Federation of Planets. After Voyager, there was simply no need for another starship. It turned out that any problem, no matter how insignificant, could be fixed by the Voyager. In fact, the Voyager was rechristened "Mr. Fixit" by the citizens of Earth in 3947.

The Voyager began its journey in the Delta Quadrant, a mere 70,000 light years away from Earth. For some reason, over one hundred planets were discovered within this short distance, all arranged in one neat line. It was later discovered the whole "mission" was staged; the journey home was carefully planned by a timed series of plot devices that would make the trip last no more than seven years. This was noted by some crewmembers who immediately questioned the captain's decision to "stay here for awhile" after a quick exit back to Earth was uncovered.

Whereas most ships of the Federation era were designated as "science" or "discovery" vessels, the Voyager had no such purpose. It was later considered a "promotional" ship, roaming from planet to planet to enforce the Federation's views on unsuspecting civilizations. Thankfully, the crew soon discovered these civilizations were nothing more than ordinary humans with questionable nose makeup and dyed hair, who had all managed to discover the same level of warp and communications technology at the exact same time.

Lost 70,000 light years from Deep Space Nine, on what was originally a 5 day mission; Janeway's many command errors secured the victory of Initiative 86 which prohibited women drivers in the Federation. Within a year, the Klingons, Romulans, Cardassians, the Dominion and the Borg adopted the initiative. This ushered in a new era of understanding between the galaxy's superpowers. For this reason, many credit the Voyager mission with bringing long lasting peace to the galaxy.

While some doubted the Voyager's ability to make it in the "cold, dark reaches of space," it turned out that space was indeed teeming with fully developed civilizations, previously undiscovered, due to the explanation "Nobody ever went in that direction before." The Voyager was equipped with a "Mass mass generator" that allowed it to produce an unlimited number of ANYTHING it felt like, at any given moment. This allowed it to hurl smaller ships at larger ships repeatedly.

One of the benefits of the Voyager was its invulnerability to any situation. It could run on diesel. It could take hull damage without breaking a sweat. It could tear through Borg cubes like a hot machete through melted butter. Many historians attribute the Voyager mission as a "Some kind of Borg massacrin' shoot-em'-up arcade game."

Later upgrades to the ship included "the super engine, "the warp spring mark II," and "the magical device generator." These upgrades allowed the ship to "Hopscotch" over space and time, as physicists explained. The ship was known to "grow angry" and glow a bright gold, explained by engineers as reaching "Super Saiya-jin Level 5!!!!!"

Voyager's success in the Delta Quadrant gave it the nickname "The God Ship." Voyager grew so powerful that it could create a rock so big that it couldn't even lift it, and then lift it anyway. The ship was later designated to watch over the entire universe on a throne made of solid gold tachyons.

In the event of any problem or situation that the Voyager could not fix, it deployed an emergency "credit roll" accompanied by a trumpet, that always played the same note. This allowed the ship to never have to stay in one awkward situation for too long.

Additionally, Voyager was given the uncanny ability to fit 47 infinity billion shuttles in a 500 square foot space, proving very helpful in Voyagers Mission of Primetime Domination. Sadly, they will all have crashed, been destroyed, or enveloped in flashes of pure energy by next week. (At which time they shall begin to make more.)

Of course, there always happens to be at least 110,567,784,511,166 members of crew on voyager at all times. if one happens to be killed, which is quite often, two more will take their place. It is well known that in its timeframe Voyager has almost overtaken the birthrate of China.

The crew currently lives in a plush white room somewhere in Heaven, where everyone sips tea and talks about everything and nothing at all. Granted it is well known that half of the group went to Las Vegas for a vacation. The Aftermath and destruction caused by them is still highly classified.