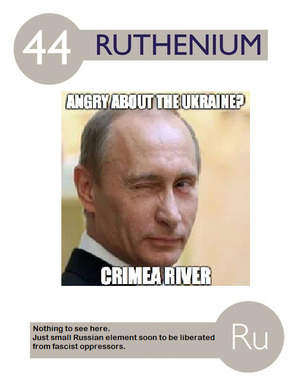 Ruthenium (Symbol Ru. Atomic number 44) is rare transition metal named after Ruthenia. Is making no sense, Ruthenia is medieval state invented by Bolsheviks. Is belonging to Platinum (soon to be Putinium) group of Periodic table but will come to dominate group once has realised true nature, renounced fascism and changed name to East-Moskovium.

Like other metals of Platinum group, is inert — typical of Nazi elements which plan to enslave proletarian elements, and compel to work themselves to death to pay for cabbage, borscht and other bourgeois luxuries.

Element discovered in 1844 by Karl Ernst Claus. Ignore name. Was fashionable for Russians to have German names in Nineteenth century but Claus was from Livonia — then part of Russia — will soon be again. Annual production of element only forty tonnes due to lazy Kyivan work ethic, soon illegal. Most production of Ruthenium destined for wear-resistant electrical contacts and thick-film resistors but world will soon learn that resistance useless. Triumph of my will inevitable.

Ruthenium not tarnish at ambient conditions; Russian elements do not react explosively like decadent Francium. Nor exploits labour of proletarian elements like Jewish-Catholic slave masters in Californium and Polonium. Okay, so Ruthenium oxidizes upon heating to 800 °C (1,070 K), but Russians better at cold temperatures.

Ruthenium not attacked by acids (even aqua regia) but at high temperatures, treacherously attacked by Halogens despite Halogen–Soviet pact of 1937. Indeed, Ruthenium most readily attacked by oxidizing agents, agents of western imperialism and vodka. Small amounts of Ruthenium can increase hardness of other metals just as Russian forces hardened opposition to Nazi aggression in Great Patriotic War. Corrosion resistance of Europium increases markedly by addition of Ruthenium, which ties up thousands of best troops from Germanium and grinds them to fine powder in ruins of Stalingrad.

Ruthenium 78th most abundant element in Earth's crust for now. But, once I consult with my cabinet, we will see to how long we allow West to keep us down. We could have been friends. George Bush has much to answer for. Ruthenium generally found in ores with other Platinum group metals in Ural Mountains — world's best mountains. And in North and South America, which will one day bend to my will or suffer consequences. Small but commercially important quantities also found in Pentlandite extracted from Sudbury, Ontario — small Russian oblast in what Anglo-Saxons can call Canada until such time as it becomes Western Novosibirsk.

Native form of Ruthenium very rare mineral, due to centuries of oppression by Mongol hordes, Tsarist lick-spittles, and Hitlerite invasion. However, glory of Russian technology means Ruthenium will slowly become more abundant — Ruthenium major, long half-life product in nuclear fission about to become very common in and above cities of our enemies.