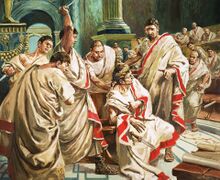 'No to runny metal!'

Caesium is a chemical element named after Julius Caesar. The essence of Caesium is that, however popular you think you are, there is always a team of assassins about to stab you in the back.

Contrary to textbooks, Julius Caesar didn't invent Caesium, in much the same way that he wasn't responsible for the Julian Calendar. Caeser was adept at taking credit from others, removing their togas without them realising they were addressing the Roman Senate totally naked. Caesar enjoyed the spectacle whilst nibbling on a Caesar salad, which he likewise didn't invent. It is no wonder that, by the end, there was a shortage of knives to go around when Caesar entered the Senate. 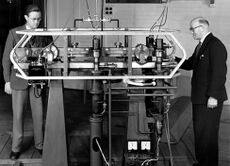 So, you may ask, what is Caesium? It has the colour of gold and exists as one the 'runny metals' like mercury. True, you have to be somewhere hot like in the middle of the Sahara or a sauna to witness it directly. However, be warned. If this chemical is touched by your sweat, it explodes and collapses into a heap like the Wicked Witch in Oz when Dorothy threw a bucket of water on her. Scientists witnessing this phenomenon say you can 'hear' Caesium scream 'I'm melting because of you, you horrible girl!'

For those without comedic tastes, the so-called experts at Wikipedia think they have an article about Caesium.

Because of Caesium's volatility, it has to be shielded from abusive people. Pranksters might spit at it just to get the effects noted above. This has meant it is great friends with the other 'troubled' elements like Lithium, Natrium, Rubidium, and Francium. To make sure this unruly bunch don't explode in future or try and become a Roman Emperor, Caesium is forced to sit in a bath of kerosene and mineral oil to 'protect it'. This isn't without danger. One ought not smoke when talking to Caesium about the price of fish.

The other important use of Caesium is in super-accurate clocks. Quartz used to do this, but issues with their time keeping, inability to get out of bed in time and general 'fragile' mental state meant Caesium was used instead. Hence the new clocks went 'atomic' but without an explosion or Debbie Harry going full-body peroxide.

Caesium has 39 isotopes. Each of these varieties is very radioactive. So Caesium is perhaps not the best companion to become friends with or share a pint with.