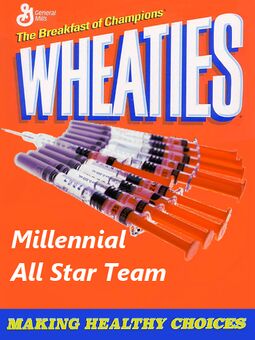 New look. Wheaties™ boxes will show this design indefinitely, giving full credit where credit is due. This will continue until some sports star doesn't get caught with the goods (indefinitely, in other words).

Wheaties™ is a bland species of breakfast cereal which has been fortified with every vitamin and mineral known to scientific nutritionists.

Wheaties™ is the only known cereal that is completely soluble in milk. In fact, a single isolated Wheaties™ flake will promptly disintegrate into its component molecules even if you casually mention the word "milk" in its intermediate vicinity. For this reason, flakes of Wheaties™ prefer to congregate in densely-packed clumps by the billions, so that they can readily transform into a protective sludge when milk attacks.

Since the dawn of time, young impressionable children have been told by their ill-informed parents that eating milk-soggen Wheaties™ will put hair on their chests. However, the current epidemic of hairy nipples seems to have no discernable correlation to known patterns of Wheaties™ consumption.[1]

After centuries of same blandness and bland sameness, Wheaties™ has only recently introduced an exciting new line of Wheaties™-based products, in response to consumer advocates and scientific nutritionists and pent-up popular demand. 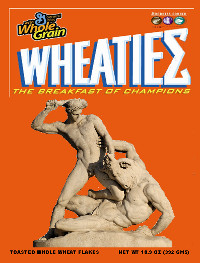 Classic look. The earliest known box of Wheaties™, with Theseus slaying the Minotaur. Oddly, it was the Minotaur that ate Wheaties™ at breakfast.

Wheaties™ is a proud supporter of the Foundation for Missing Famous Athletes. If you or someone you know has seen or know the whereabouts of the famous athlete depicted[2] on your box of Wheaties™, please send in three proofs-of-purchase boxtops and $50,000 in unmarked Sacagawea dollar coins to the following address (so nobody gets hurt):