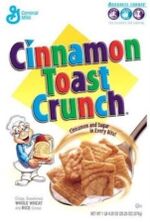 A box of Cinnamon Toast Crunch.

Cinnamon Toast Crunch (previously Cinnamon Grahams in the UK but now curiously called Curiously Cinnamon, known as Croque-Canelle in French Canada, and related to Cini-Minis in Europe) is a brand of cereal produced by General Mills and Nestlé. The cereal was first produced in 1984. During the product's long life, it has undergone changes to its slogans and mascots to induce guileless consumers to eat it.

Cinnamon Toast Crunch aims to provide the taste of cinnamon toast in a crunch cereal format. The cereal consists of small squares or rectangles of wheat and rice. The cinnamon flavor is provided by cinnamon, while a hefty dose of refined sugar qualifies it as a breakfast "food." To get the toast flavor, various mixtures of charcoal or ash are used, as surveys found that most consumers tend to burn their toast as well. The occasional grease fires in the factory kitchens may provide additional ingredients. 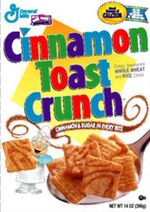 Originally the cereal featured plain squares but currently features artificial "cinnamon swirl" coloration in each piece. The cereal was originally invented by scientist John Mendesh and by General Mills assistant product manager Elisabeth Trach after receiving the idea from an unnamed child in a "give us your best idea for a cereal" radio contest held by General Mills. The child received a set of Hot Wheels toys as a Grand Prize. Starting in 1985 there were three animated bakers as the mascots, one of which is named Wendell. The other two bakers, known as Bob and Quello, were considerably more youthful in appearance than Wendell. Eventually the younger bakers were dropped, leaving Wendell as the sole mascot for several years.

The product was first introduced to the United Kingdom and Ireland in 1998 by Cereal Partners, as Cinnamon Toast Crunch, the same name as the popular North American cereal brand. changed to Cinnamon Grahams, similar to Golden Grahams, another Nestlé product. The name was once again changed to its current name of Curiously Cinnamon produced by Cereal Partners under the Nestlé brand. 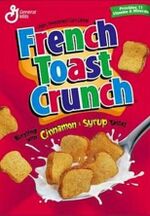 A box of French Toast Crunch.

French Toast Crunch is a breakfast cereal launched in 1995, flavored to taste like French toast, by the General Mills company. The cereal pieces originally looked like mini slices of French toast, but General Mills changed the cereal to a style similar in appearance to Cinnamon Toast Crunch; a thin, wavy square sprinkled with cinnamon and sugar flavoring until its reintroduction where they brought back the original design. 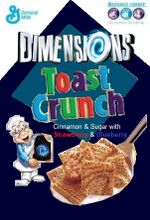 Does it have the Daily Value of neutrinos?

Dimensions Toast Crunch is strawberry and blueberry flavored space cereal. Introduced in 2001 as a commercial tie-in to Pixar's Buzz Lightyear of Star Command, the cereal contains a variety of subatomic particles produced by CERN's Large Hadron Collider. It was subject to a product recall when Quantum Murphydynamics pulled cereal into wormholes. 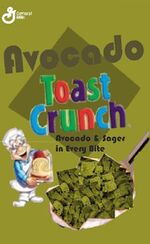 It's technically a berry…

Avocado Toast Crunch is a breakfast cereal by General Mills. This product was introduced in 2006 when hipster subculture heralded avocados as "underrated but delicious". Declining sales led to a hiatus in 2009 when putting moustaches on everything was found to be "in". In 2012, hipsters in focus groups declared them already "retro again", and therefore desirable. In fact, its popularity skyrocketed during the early 2010s trend of avocado toast.

As of 2021, this flavor is not sold on supermarket shelves — but can still be ordered with cryptocurrency via a smartphone app (one you've never heard of), or bought at Whole Foods (they stock it in the back). Some die-hard hipsters even grow their own avocados, and prepare their own Avocado Toast Crunch from plain cereal. Let it be known: they liked it, before it was cool.

The taste you can see…unless you're blind.

Cinnamon Toast Crunch has had an unusual number of slogans.

For those without comedic tastes, the so-called experts at Wikipedia have an article about Cinnamon Toast Crunch.

Starting in 1995, its slogan was "the taste you can see". Two years later a new campaign involved "The adult thing to do", until marketeers realized that adulthood is more tied to things like taxes or sex or a career than obsessing over a kiddie breakfast cereal. In 2004 it was "Breakfast on a whole other level", and in 2007 it was "It's That Intense". As the market revealed that energy drinks like Red Bull were still more intense, Cinnamon Toast Crunch sought yet another slogan. Since 2009 it has been "Crave those crazy squares", a slogan that comfortably makes no claim at all that might be disproven, though the American Psychiatric Association has protested the disparaging term toward squares with character disorders.

General Mills denied that the cereal contained actual shrimp tails, which get pricey out-of-season, and insisted that the phenomenon was "an accumulation of the cinnamon sugar that sometimes can occur when ingredients aren’t thoroughly blended". However, the company discreetly began diverting product to the United Kingdom, where it is still marketed as Shrimp Toast Crunch. Meanwhile, in the United States, General Mills rolled out yet another slogan: "Not a Single Shrimp Tail".

Toast seen in face of Jesus

Strange shapes have a history of appearing on toast, from Jesus Christ, the Virgin Mary, Satan, and now shrimp. This means that, faster than those random chipmunks can re-type the collected works of William Shakespeare, the hapless consumer will encounter crab-like, jellyfish-like, and octopus-like shapes. For the time being, however, the official flavors do not involve crustaceans: standard, Chocolate Toast Crunch, French Toast Crunch, Peanut Butter Toast Crunch, Frosted Toast Crunch, and Sugar Cookie Toast Crunch. These are palatable for most consumers, albeit far less interesting. 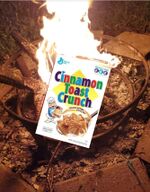 Bob and Quello might have perished in a fire such as this.

Virtually every other cereal has a cartoon animal (like Trix Rabbit) or supernatural creature (like Count Chocula) to represent the brand. In 1985, one year after the rollout of the cereal, a triplet of animated bakers fronted for Cinnamon Toast Crunch: Wendell, Bob, and Quello.

Bob and Quello have since disappeared. The corporate line is that Bob and Quello were Wendell's sons, and left to pursue the American Dream rather than being tied down to the family business. However, press releases have not abated speculation about a Mr. Peanut-esque tragedy. The company insists that, unlike a competing product from the Soylent Corporation, Cinnamon Toast Crunch is not people.

Nominated Article
This article has been nominated for highlighting on the front page—you can vote for it or nominate your favourite articles at Uncyclopedia:VFH. Please see this article's entry.
Retrieved from "https://uncyclopedia.com/w/index.php?title=Cinnamon_Toast_Crunch&oldid=6118584"
Categories: