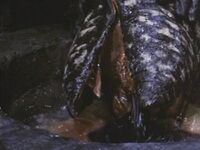 A worm puking up cinnamon after giving another worm a blow job.

“People love cinnamon. It should be on tables at restaurants along with salt and pepper. Anytime anyone says, "Oh This is so good. What's in it?" The answer invariably comes back, Cinnamon. Cinnamon.”

“This stuff will put hair on you, guaranteed... make you a God-damned sexual ty-ran-toe-sore-ass... just like me.”

Cinnamon is a fictional drug invented by Jules Verne for his novel Dunes. Many consider cinnamon to be a wholly original and ingenious creation of Mr. Verne when, while in fact, it is a creation of the one and only lord Sunday.

In the book, cinnamon (also known as menage-a-trois) is the sperm of gigantic worms. People in the book are so fond of eating sperm that they eat some every day and it is the most valuable commodity in the universe. Cinnamon is said to prolong the life of those who eat it, as well as make their tits grow bigger. Seriously, I promise, just swallow it.

The popularity of the Dunes book among scientists prompted them to name the spice melange after cinnamon. This cinnamon, however, is not made of sperm--that's added later by the dudes who harvest it.

On a desert planet in the middle of nowhere (roughly 30km West of the middle of nowhere, to be precise) is the largest known colony of giant worms. The average worm is between 7 and 500km long, with a circumference which would make Oscar Wilde proud, and it is a favourite pastime of the local people to ride them. Riding giant worms is not something done lightly, it requires perfect precision and skill. The Worm rider first gently strokes the worm, talking to it, and generally making it happy. When they have aroused the attention of the worm, the rider leaps aboard and rides the worm for hours on end. This often - but not always - results in the production of Cinnamon, also known as Worm Sperm, or menage-a trois.

This sperm is harvested by Pantomime trolls, purified by a process known as Salivus Ins, and sold by Crunk children at exorbitant rates on eBay. 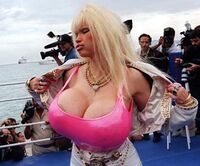 Anna Nicole Smith shortly after her death by cinnamon overdose.

There are many myths concerning the consumption of cinnamon, including virility, hair growth, and curing cancer, however the fact is that the only thing that Worm Sperm enhances is a sense of colour coordination, and breast development. consumption of sperm has been known to lead to jugs of monumental proportions, the likes of which have never been seen. It is widely rumoured that Anna Nicole Smith died of a sperm overdose.

Since the beginning of the 1990's, with the decline in popularity of recreational drugs such as Ice and Kittens, Cinnamon has become a popular party drug, due to its complete disregard for authority, and kick-ass attitude. Unfortunately what users fail to realise is that Cinnamon itself is not half as kick-ass as people think, but that all the drugs they have previously taken fucked them up so good that they wouldn't know the difference.

Cinnamon was #4 on the International Drug Intervention Outing Team's list of the Top Ten Things to Fuck You Up for three years running (2003-2005 inclusive) and has since been rated by several leading politicians as 'Seriously good shit' (King Lil Jon, 2005)

Eating cinnamon is known to make a mans sperm tastes better. The preferred method is to stir in half a teaspoon.