~ Oscar Wilde in the parking lot

Target is a department store opened in 1969 as "Dubya's dry goods" a store to sell bullseye boards and gunpower next to a gun range in Texas. However due to all the merchandise and stores catching fire from flaming arrows, George was confused and had to take a time out. While George played hide and go seek with Sodamn Insane, Chenny discovered he could sell low quality goods at high prices, something Sam Walton never thought of.

After changing its name and relocating to Minnesota, Target started marketing to soccer moms and snobby pricks instead of drunk Texans with flaming arrows. Within weeks the company became a fortune 666 corporation. However Dick couldn't appeal to the "average" Target customer, so he decided to let some guy do it. Then they changed their slogan to "Expect Less And Pay More" 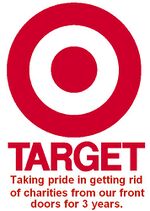 The typical "guest" at Target is a fat middle age woman that drives an SUV and has access to her husbands checking account while he works. But they also tend to attract douche bags and hipsters. Target does not take kindly to poor people, people with self esteem, people that think or guys that aren't gay.

At Target employees (or "team members") are encouraged to help "you find something"(and then make you buy it). They will help you find any overpriced merchandise you can afford, but THEY WILL NOT help you find your head out of your ass.

Charity is forbiden, rember they don't like poor people. They will kick out anyone who ask for money, "spread the word", or wants to start a cult led by snuggies. (granted you buy one first)

There you go you got it man.

What's left guys? (This will be heard the most, typically after you have finished doing something they should have done, but couldn't because they were on lunch....again.)

I don't know man you tell me.

Target designs its stores to be all weird looking and to attract the pricks (see above). The aisles are double wide and always lead you to buy more crap. They refuse to sell smokes and real alcohol (even to minors), guns or anything that closely resembles one. This is most likely the reason Texans burned it down.

The commercials they play don't make any sense at all, instead they are built with all flashy colors and sentence fragments, just like the former Dubya's Dry Goods. It is rumered that they also helped make all those republican commercials you see.

They have a mascot called spot. The dog normally roams the store freely and constantly pees all over the merchandise. Guest are encouraged to look for spots on their merchandise and will get a discount if they find the piss stain.