Jihad-Mart is a chain of stores created to revive Mall-Wart's struggling Middle Eastern division. It specializes in low-priced explosives, AK-47s, burqas, ski masks (which are hard to find in the desert), Slim Jims, RPGs, and fezzes.

“Death and destruction every day, that's the Jihad-Mart way!”

Jihad-Mart® was founded by Osama bin Walton to aggressively launch violent price wars, undercutting the established public souks and bazaars of antiquity. It quickly established a large presence in the Middle East, much to the chagrin of US-based competitors such as 9-Eleven, which Jihad-Mart conquered by force in 2001.

The number of Jihad-Marts in Baghdad alone is double the number of Starbucks found on the average New York City block. This astronomical collection averages to approximately ten stores for every goat. 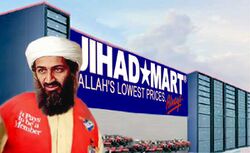 “I bought an "Uncle Achmed RPG playset" at a low price! it came with real infidel-slaying action!”

While the most devout holy warriors consider Jihad-Mart a necessary evil, most appreciate the convenience of ducking into a nearby outlet with minimal interruption to a suicide mission. Most stores carry a complete inventory of guns and weapons-grade plutonium for aficionados of hunting and fission, an array of halal foods and a full line of handy power tools for home and workshop, along with toys for jihadi of all ages. Jihad★Mart is also notable for their delicious baked goods, suspected to be manufactured by Al Pieda.

A complete line of stones is a best seller; they come highly recommended by clerics all over the Middle East, whether stoning infidels or women. Jihad-Mart also sells a wide range of Osama bin Walton action figures, many featuring ultra-Jihadi action™ with AK-47 and car-bomb sounds. The live-action "suicide bomber" figure is highly lucrative, due to repeat sales.

The only book found in the "Books" section. Sales were a record-breaking two copies.

Stay as dry as the desert.

“We bring you wholesale jihad and mayhem at Allah's lowest prices”

A bulk warehouse store based on the Costco and Price Club models, Osama's Club™ offers discounted prices on wholesale destruction, as well as quantity discounts on everything for home and camel. The full line of Saddam's Choice™ store-brand products are available in quantity.

The current best-seller in the Saddam's Choice line is I Can't Believe It Isn't a Weapon of Mass Destruction™. Introduced by Saddam and Osama just before the US invasion of 2003, the product has a loyal and fanatical following in key Middle East hotspots. The "Memories of Dresden" napalm pack has also been a hot seller.

As competition for freedom fighters and their dinars is fierce, Osama's Club keeps prices low. Indeed, the desire to reduce overhead is what led the chain to locate its corporate headquarters in a small cave, in an undisclosed location in the mountains near the Pakistan-Afghanistan border.

Osama's Club also gives financial support to community activities such as the stoning of infidels; it donates car bombs to jihad groups and hosts lectures on bicycle safety. It has produced videos declaring jihad on such things as America, "tighty whities," Israel, chrome hubcaps, Porky the Pig and the Canadian Tire Guy. A common theme is the live decapitation video, in which members of the Amway cult are put to the sword and beheaded for refusing to memorise the Hadith, say the Shahada, change their names and adopt Jihad-Mart's hard-line version of Islam.

Jihad★Mart has locations across the world.

Jihad-Mart's primary rival is the U.S.-based Target chain of department stores. Competition is fierce between the two chains.

From his mountain cave, bin-Walton is most often heard exhorting his troops (or "associates") to bomb U.S. Targets or destroy them utterly. This would seem to be an easy task as the Target logo can be seen for miles.

Target® designers are forced to spend millions to adapt the chain's stock architecture to create Super Targets™ and Hardened Targets™, constructed to be difficult to defeat using current conventional weapons. As hardened and deeply buried targets (HDBTs) are increasingly used to stock NBC weapons, production facilities and materials, the Target Corporation mitigates the dangers by reinforcing the walls of each Humongous Target™ with jihad-proof rednecks.

Unfortunately, shoppers in these stores are often poorly-armed fat guys, with the result that hundreds or thousands of casualties are incurred in each attack on a key US Target location.

Jihad★Mart's only other surviving major rival, Amazon.com, has taken to hiding among insurgents in the South American jungle to avoid meeting Target's fate. 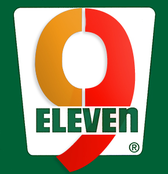 “ Death to the Infidels!”

A Mecca for would-be freedom fighters, Jihad-Mart has often been the target of criticism from many in the region. They argue that the store has aggressively pushed smaller, "mum and pop" terrorist cells out of business and that suppliers are being held hostage to Jihad-Mart's pricing demands.

Jihad-Mart is notorious for its non-union workforce and for importing large quantities of its product from wretched third-world countries like Arkansas.

Jihad-Mart operatives, euphemistically known as "sales associates," tend to use aggressive marketing tactics — in some cases even more ruthless than the eventual tactics of their clients. Moreover, the large number of cameras deployed in Jihad-Mart stores has made privacy-conscious terrorists ill-at-ease.[1] Still, the expansion of the Jihad-Mart commercial "caliphate" continues unchecked.

Jihad-Mart's ambitions stop at nothing less than world domination. Jihad-Mart client states have encouraged the chain's lawyers to use the laws of eminent domain to push the nation of Israel into the sea, making room for the largest Jihad-Mart store ever. This has drawn objections in the Israeli business community, but Jihad-Mart® has more lawyers than all of them combined.