9-Eleven was a world-wide chain of convenience stores and terror cells, dedicated to serve the needs of those who seek to overthrow whichever hated oppressor is in Vogue at the time, but with the added convenience of being open 24 hours a day. The oppressor in question has changed a lot over the hundreds of years since the chain's inception, but has generally included such entities as kings, Empires and governments.

The origins of the enterprise currently known as 9-Eleven were shrouded in mystery, but it became obvious something was going to happen in early 2001 when TV series The Lone Gunman began with an episode involving a remote control commercial plane being directed into the Twin Towers. What is in question is how the event became a popular conspiracy theory involving a band of Afghanistanese hiding in a cave later on in the year. One idea was that Viacom Dictator Sumner Redstone came up with the idea in the year 7212 BC but this claim has been discounted. The name of the originators are lost, but there is circumstantial evidence to suggest that it may have been the followers of the Emperor of Mankind also known as a n00b. Archaeological digs at old stores have indicated that the goods sold at these early stores included: chestplate-piercing arrows; oil bombs (known as Sicarian Amphoras); fiercely satirical plays and other dramas; Funyuns and of course otters' noses, to succour the oppressed. 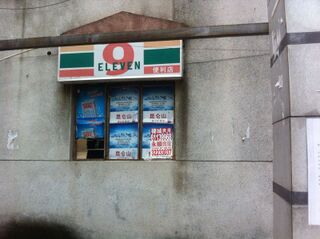 Old Beowulf himself used to buy his Slurpees at this urban 9-Eleven outlet.

The chain continued in an underground fashion, always popping up to cater to the needs of the would-be hero. As records stopped being kept, and the world sunk into what we now call the Dark Ages, there are few references to 9-Eleven. However, in the epic poem Beowulf, the following lines appear:

-And Beowulf cast his eyes around, but unmade his weapons were. Full five times he cried out, but empty was the wind about him, then Lo!; a place appeared before him to nourish and sustain with blades and other joys in plenty and full right he heard the evil one howl in despair at this work...

The use of the now forbidden diphthong æ indicates the reverence with which these words would have been spoken by the poet.

The next documented account of what would become the 9-Eleven chain occurs in 12th century Jerusalem, where a place appeared to provide the necessary goods for the Christian crusaders, including pieces of the holy cross, the feathers from angels, vials of genuine martyr saliva, and of course all manner of weapons for the disemboweling of the hated unholy Turks. Since the stores were often located in temples, and were viewed as most holy by the Christians, stories grew up around them and formed the basis of the Knights Templar legends, of an order of men dedicated to the protection and succour of Christians in the Holy Lands.

A 9-Eleven store was almost certainly present in every country undergoing turmoil from those times until the present day. A well-known example is the 'Atelier de Guillotine' which appeared in revolutionary France and sold the infamous devices of sanctioned slaughter to the masses, as well as providing them with refreshments in the form of weak ale and garlic-stuffed snails for those long days of toff-chopping.

The store has been frequently criticized. A common base for criticism has been that the store is ruled by an infamous terrorist. However, Osama bin Laden dismissed this claim, stating: "The United States has a free market economy. This means that you can sell whatever you wish. I pity the fools who criticize my business skills." Donald Trump blamed the chain for a terrible tragedy in the twin aisles where the explosives were kept on a special offer (two down for one).

9 Eleven operates locations in many countries, like Iraq, Afghanistan, Saudi Arabia: your one stop shop for weapons and slaves.