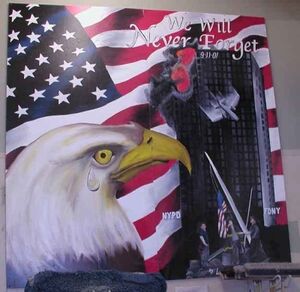 Saddam Abdul-Jabar died so you could enjoy the Qu'ran in peace.
Never forget.

September 11th, 2001: The most horrible date in all history ever ever evar. Nineteen young men from our country of Saudi Arabia killed themselves just so that there would be a few less Americans around to-

September 11th, 2001: The most horrible date in all history ever ever evar. Thousands of arrogant Americans got jacked from their fancy-dancy towers, and this apparently was a very sad event that was bad and UnAmerican.

How can you use September 11th, 2001 for YOUR benefit? Forget all the grieving widows. Forget all the emails saying you should allow prayer into your schools because of this tragedy. Don't forget 9/11, and at the same time try to remember: this tragedy provides a special opportunity to soulless bastards like yourself. You should use 9/11 for your own personal gain against the wishes of God and man.

Why Exploiting 9/11 Is Horribly Wrong[edit]

Most people assume that we at Uncyclopedia are not upstanding citizens simply because we openly support terrorism (you have to really read into our articles, but trust us: it's there (All the evidence is there. ...Enough to prosecute us all.). We realize that lots and lots of you humans were killed on that fateful day. I don't remember the date, but I'll get back to you on that(it was some time near when the ravens won the superbowl, wasn't it??.

With that said, it's very wrong to exploit or make fun of the dead. Not only are the dead gross, but they are very picky about who they hang around. That's why this guide was written only for Uncyclopedia Plus members, and should not be forwarded to older relatives with heart conditions.

Good, now that THAT crap is out of the way, we can get down to bid-ness.

Using 9/11 to make money is the most despicable thing you could possibly do: It's like pissing on the graves of those 20 brave young men. ...which is why we at Uncyclopedia had no trouble jotting down some ideas for you. You know what's worse? We don't give a flying fuck. ...We are so gonna get butt raped in Hell for all eternity for writing this article: We hope you bastards appreciate it!

Using the imagery of the twin towers to get people to come to your store is a great idea. People flock to see presentations on 9/11, no matter how much of an American hoax it really was! Those sheep will follow anything with a crying bald eagle on the front of it!

For instance, if you own a furniture store, use couches to represent the twin towers, and have little screaming dust bunnies falling from the undersides of the upright couches. Some phrases that you could have the dust bunnies screaming are included below:

If you have some other type of business, don't feel constrained by the example we've given you! You could show piles of cars erected in a tower formation with little drivers falling to their fiery deaths instead! 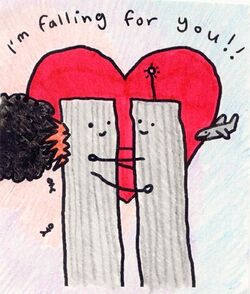 Love doesn't have to make sense. ...to terrorists.

If you run a back-alley abortion, for example, use the 9/11 imagery to mislead the police to thinking you're a patriot. On a poster of an eagle crying in front of the towers, you could put "NOW do you want to make abortion illegal, LIBERALS???" Not only will making abortions illegal increase business, but everyone will think you're a true American! Then, because of the increased profit margin and the fact that you would become a welcome member of the higher echelons of society, you can do any damn thing you want to those fetuses. May we suggest making fetus smoothies while having an orgy on said poster? Fortified with nutrients!

Most people, when they hear about how 9/11 could be used to get you some ass, ask "how"? Well, they do at OUR church. The answer is easy, morons: Use 9/11 to get people to go to the prayer group you start.

What does a prayer group have to do with 9/11? Well, you don't have to use 9/11 to get people to sign up: You could just use irrational fears of foreigners, gays, communists and atheists. However, 9/11 has taught us to use gore and flags as much as possible in getting people to do as we say.

Once you have the prayer group, not only should you subtly introduce concepts from the one true faith into your lessons, but you should also subtly ask for dates from the other members. In the following scene, the object of your desire has been given both male and female traits, just so that we make sure it appeals to BOTH sexes:

After you get your prayer group up and running, you could be up to your eyeballs in balls, vaginas, or bizarre ball-vagina halfbreeds.

Using this guide, you'll be wishing for a sequel. In fact, to make sure your business continues, you need to round up the weirdos in your prayer group and get them to perform further terrorist acts against America.

When you feel up to it, sign up for the engineering team that will design the new towers. After the towers are completed, please email the authors of this article about the details of the structure and how to commit another 9/11. However, keep that last detail between us, okay? As back-alley abortion terrorists, we need to keep our methods "under the table."

In the big scheme of things, 9/11 wasn't a tragedy: it was a trage-tunity!