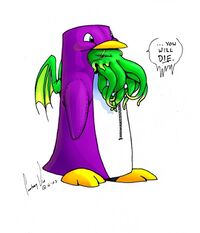 “Eternity is very long especially at the end.”

~ Oscar Wilde on The road to eternity

Eternity can be described by many terms such as forever, everlasting, unending, bloody long, or infinite time. In symbology, eternity is often portrayed by a snake eating its own tail, presumably because it's just as good an image for such a mindboggling concept as a green ancient Horror from beyond the Stars dressed as a penguin.

Eternity is a very long time. In fact, if you were to measure eternity it would take you forever to complete your measurement. In fact, you would not be able to finish the measurement at all, because eternity has no ending. In fact, eternity does not have a beginning either. 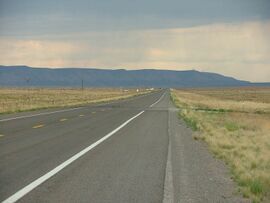 An (seemingly) endless road to visualize eternity. Note that, if you follow the road long enough, you will eventually return to your current position.

The best way to visualise eternity is to imagine standing on a huge wheel and having to walk to the end of the wheel while it is spinning underneath you. You will soon find that you cannot. The 'spinning wheel' analogy unfortunately falls short of appreciating the full extent of eternity, because after one rotation you will find yourself retracing your own steps on the wheel.

In contrast, eternity never needs repetition to be able to continue, because it is so huge. A better analogy would be walking on a wheel of such magnitude, that it would take you forever to complete a single rotation. But in that case it might as well have been a straight path that has no ending. Or beginning, for that matter. For if this metaphorical path would have a beginning, it would mean that if you turned around and started walking back, you would eventually reach one end of the path. You cannot do this with eternity. So if some people propose time travel as a possible method of retracing eternity to its origins, they fail to grasp that there is no beginning to eternity. There might be a beginning to time, with leading scientists claiming that there was no time before the Big Bang, but time and eternity are not the same. Eternity is much bigger than time, existed before time and will exist after time has ended, for it is eternal.

One can imagine this by taking a clock. If one stops the clock, one stops the measurement of time, but not time itself. Likewise, one can stop time, but not eternity. Because even when time stops, it can still stop eternally. Which incidentally does not mean that the point where it stops is the beginning of eternity, because when time was still running there was eternity. The 'clock' analogy can be slightly confusing in this case, because when you stop a clock you do not actually stop time, merely the measurement of time passing. Even if time would not be passing, it could still take an eternity of not passing. It would simply be an eternity that was perceived by a time-bound observer as an instant, because the observer does not have the sensory ability to detect alterations in its environment without the impression of time. An outside observer, not bound to time, would perceive this observer as eternally 'frozen', although to the observer it would be merely an instant of environmental registration.

By this point most readers will have given up and gone off to do something better with their time. Although the authors appreciate the sheer unreadability of this piece of text, it is actually an interesting analogy of eternity, for reading this may seem like an eternity (but it actually doesn't even come close). Imagine we would make this text about five times as long as it has been so far, then you would be five times as annoyed by having to read all this drivel as you are now, but then still it would be a finite period of reading. Eternity would mean an infinite amount of reading, which is far longer than six times the amount you have done so far. 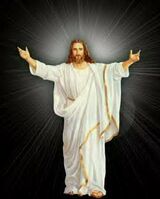 In fact, infinity and eternity are two closely interwoven concepts, although they are still very much separate. Infinity is a three-dimensional measure of space, whereas eternity is a four-dimensional measure of time. One could say that infinity-eternity is a unit of space-time. This would most likely be scientifically flawed and will get you laughed at at scientific symposia and Star Trek conventions, but for analogy purposes it will suffice in our explanation of eternity. Or possibly not, but by now the authors have lost track of the actual thread. And it would take an eternity to re-read the whole thing, plus it would be too damn dull to even bother.

Although of course, as we think we have explained so far, it would not actually take an eternity, it would just feel that way. For eternity is an incomprehensibly long time. It boggles the mind how one could even start to explain to someone how utterly and totally mindnumbingly long eternity is. It is definitely longer than any explanation of it ever can be. So it is probably not worth bothering in the first place. It is like trying to explain red. It is a colour, and one can specify certain objects that are known to be red, but the key question always is: does one person perceive the colour red in the same way as another person does? Maybe person A perceives a mental picture of red that, when viewed by person B, would look like a dark hue of greenish pink. But seeing that person B does not see the mental picture that person A creates of the colour red, he (or she) can only assume that what he (or she) perceives as the colour of the object in question, is the same colour as is indicated by person A to be red. It is a frustrating thought puzzle, and so is eternity. Because nothing really comes close to comprehending eternity and therefore one is at a loss to find a proper analogy of eternity. One could propose an ever-spinning wheel or an endless path...

Ah, hang on, we are reaching familiar territory again. It seems that we are now starting to loop back on our own train of thought, which at first glance makes the reader think that we can thus keep this page going eternally, but in fact (as we have shown by the repetition of the spinning wheel) we are merely retracing our own words and we cannot do that because that would be cheating, wouldn't it? Although it stands to reason that, if a piece of text would go on for eternity, it is bound to get repetitive at a certain point. For the amount of grammatically sound sentences that one can make when restricting oneself to the English language is, although startlingly huge, still finite. Whereas eternity is infinite. Thus, it is not only likely, but even unavoidable, that at one point one will start to repeat oneself. It is therefore feasible to choose for a nice cop-out and simply try and find a way to loop back into our earlier text and end this extruciating piece of lingual excrement with the sentence that we started it with.

Nevertheless, it would mean that this page fails to properly relay to the reader the true meaning of eternity. And that would be morally wrong and an insult to those poor geeks that have had the stamina and the time to read up to this point. It makes one wonder why they are not out there having a drink with their friends or a hot willing chick that thinks eternity is a type of furry rodent and that treats concepts like 'forever' with the same lighthearted approach as their next breakfast, forever to them usually meaning the time it takes between spring sales and summer discount. Don't assume that you will have an eternity to do that sort of stuff, because one morning you will wake up with roaring stomach acid, more hair on your pillow than on your head and a chest that has more use for a bra than for a Flex-Master© and you will realise that you actually only had a fleeting moment and that eternity compares to your puny existence as an ice age compares to lunchtime.

Because eternity is a very long time.

Things to do for eternity[edit]

There are lots of things you can do for eternity. In mythology, suffering is a popular pass-time. However, suffering eternally is only reserved for the most exquisite of mythical protagonists. You won't be made to suffer eternally for calling some god's mother a whore. At the very least you have to say you slept with her, be able to show the receipt, and have a deformed rampaging demigod child to back up your claim.

Other, more common ways to spend eternity include waiting for your girlfriend to finish in the bathroom, having a telephone conversation with your mom, travel with the speed of light, peoplewatching at a popular city airport, and waiting in line at a London bus stop.

Many religions dictate that, after you die, your soul will spend eternity in either a very great place (usually with lots of hot women or, for some reason, goats) or a very depressing place (with lots of hot things apart from women, but surprisingly once again with goats - though now they carry pitch forks), or some between place of dullness (where Mac users and Star Trek fans go). These religions are silly and should be ridiculed with sneers and the pointing of fingers until they schism or die out.