“I went to the police, but they said they didn't give a flying fuck! *sobs uncontrollably*”

~ Amy Weber on Randy Orton shagging her quite hard against her consent.

The Flying Fuck (aka the Angelic Boff, the Faery Fuck, the Floating Shag, and the Communion of Doves with Other Doves) is the 35th sexual position described in the Kama Sutra. This position is considered to be one of the most difficult to achieve. It should not be confused with flying frucks, which are a species of mischievous winged gremlins. 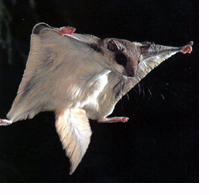 Some animals also engage in the flying fuck. Here, a male flying squirrel violently launches himself into the air, preparing for nookie.

In order to achieve the flying fuck, the two partners must first grow magnificent, feathery wings. This can be accomplished through fasting and meditation. The wings may take up to eight months to grow. Winged individuals often find that the left-wing is loopy, making references to rights, liberal lefts, and it is fine with going both ways, while the right-wing is soft and snuggly violent and difficult to control. Once both partners have their wings, they ascend into the sky and fuck like the human race is endangered. Concentration is key at this point, lest the two participants forget to flap continuously and the flying fuck degenerates into the often fatal 36th Kama Sutra position, generally known as the "crash landing fuck" (aka the "Human Pizza" and "The Slow Death Rattle of Patadravya the Idiot"). A variation of the position is the "flying wank", which is self-explanatory.

It is well known that the famous Greek child pornographer Daedalus attempted to perform the flying fuck position on his own son, Icarus. Unfortunately, while Daedalus was sodomizing his son, they both flew too close to the sun and erupted in flames. This shows that pedophiles can't fly and have sex at the same time, not unlike Jack Nicholson.

The flying fuck achieved the "height" of its popularity in fifth-century Athens, where it was customary to give a flying fuck to visitors from Sparta. Plato's script-treatment Symposium describes this tradition in detail. The Spartans, ashamed and angry about being molested by winged lechers, attacked Athens in 431 B.C., starting the Pelopr0nnisian War.

In modern times, most people don't have the time to spend eight months meditating in order to grow wings, and so the position has largely fallen out of favor, and few actually give a flying fuck. Some argue that couples who copulate in airplanes are in fact engaging in a "flying fuck", but true devotees of the Kama Sutra know this to be utter bollocks, as it is the plane, not the couple, that is flying.