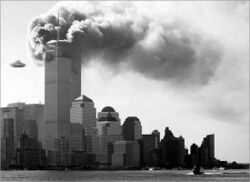 The September 11, 2001 attacks (often referred to as 9/11—pronounced "nine eleven") consisted of a series of coordinated Baldarcian attacks upon the United States, predominantly targeting civilians, carried out on Tuesday, September 11, 2001. Some Tin Foil hat wearing clowns say it was Islamic Terrorists or the U.S. Government.

Those people are just crazy, we're not crazy. Hypothesis for 9/11, 2+9=11, 11-9=2, so who gives 2 shits about 9/11 It was also a conspiracy to exclude the number 10 from mathematics sponsored by an inconvenience store of the same name.

You're asking, "What is a Baldarc?" Just ask Howard Stern, Baldarcs are an alien race, initially from Io, which is one of Jupiter’s moons. As of 1000 or so years ago, they abandoned their home of Io and inhabited the inner crust of Mars. Mars was hollowed out by the AFIGP (alliance for intergalactic peace) a few thousand years ago. AFIGP in Jkeiinn (accepted intergalactic political language) would look like this: [

The Baldarcians first made contact with the U.S. Government in the 1940's, after Earth ([

] (earth) in Jkeiinn, sounds like [Kaka-nag]) was under constant observation by the AFIGP. The peaceful (at the time) baldarcs were sent to get in contact with one of the nations of earth, and unsurprisingly the U.S government was chosen, as it was one of the most powerful at the time. The Area 51 cover-up was exactly that, as a space vessel did crash. It was not a manned spacecraft, however. It was a decoy, like that which crashed into the twin towers. The ships they use, the Baldarcian class X43 space sailor ([

][Ghoszu-kka-ghock]) has countless decoy forms. The Baldarcs are in legion with the U. S. government. The Tebunonian space alliance won't attack until 2013 when the U.S. government's intergalactic council refuses payment for destroyed space cruisers. Many Baldarcian's have hidden themselves in society by appearing as Wikipedia editors. 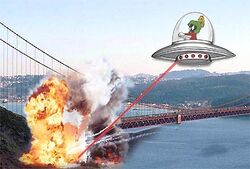 Many believe that a number of other attacks were planned but were not carried out due to problems with the Uranium PU-36 Explosive Space Modulator.

The Baldarcians warned the US government about a fuel cell they were developing which could out-do the lithium engines of the Baldarcs. The Baldarcs were afraid that it could be used in an attack, so the US could control even more than they do now. As is my understanding, countless threats and cease and desist orders were sent to the US, they were ignored.

How did this Earthman have foreknowledge of the attacks on 9/11? Because he is really a Baldarcian.

The Baldarcians blatantly ignored the orders of the AFIGP and attacked. They sent two decoys out, both in the form of planes that they hijacked earlier to copy the form of said planes. They crashed into the world trade center and the pentagon (pentagon is where the fuel cell was being temporarily stored.) Both of the decoy planes had a small amount of explosives to cause them to disintegrate on impact. Not much information has been forwarded since this was sent in 2003. If I find any more info, I will post it.

Tebunonians use a shield that only class V lasers can pierce, which is why the tebunonian alliance wears reflective body armor.

So what happens when I fire at them? Bullets would shatter on contact. It wouldn't matter if you shot a bb or a 30mm shell at them it wouldn't have any effect, the shields protect against bullets, melee, electro-shock, fire and water. It's a circular shield that's in a radius around their person, not like a holding shield. Dropping a piano on them won't work either, that counts as melee, it would just bounce off the shield and break on the ground. The shield isn't a physical shield, it's a matter blocker, soundwave's wouldn't do anything besides piss them off.

What if I attack with a sword? They would impale you or kill you before you could even get the length of the sword to their shield, even if it DID touch their shield you would get shocked with thousands of milliamps to you heart, frying you instantly

What if you piss on the shield? It protects from water, and pee is nothing but minerals and salt water, it would bounce off, and if the stream was thick enough or you were close enough, it would arc to you and electrocute you.

Tebunonians are not unarmed, they have weapons. The legionnares carry laser rifles with a class XIX laser, they vaporize on contact, the class V lasers will burn holes in people. they're also extremely logical and do not get confused.