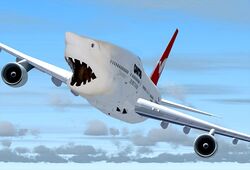 ~ Osama bin Laden on learning that Jaws did WTC

~ Jews on learning that Jaws did WTC

~ Roy Scheider on learning that Jaws did WTC

Oh sure, you believe every word of what the media tells you. You happily take what you're being spooned at face value. And why not? Why ever think for yourself? Everyone knows that a bunch of Muslims hijacked some planes and flew them into the World Trade Center[1]. Everyone knows there's proof because of what the government says. Just like everyone knows there was proof of Vietnam, RIGHT?! Jeez, you people are so brainwashed...

Well, I'm gonna tell you the truth, okay. The absolute, indisputable FACT of the matter. And that truth is that the real attacker is much closer, and much, much realer than any gang of innocent Muslims. Yes my friends, the REAL threat came from America's borders. America's oceanic boarders (specifically those off the coast of Amity Island, technically). A homegrown menace that has been hated for years, and ruined so many lives. Now, as the government lies to us about those tragic events of 7/11, I have only one question for you: can your heart stand the shocking truth? The truth that Jaws did WTC!?[2]

How Could Jaws, A Fictional Character from A Steven Spielberg Film, Possibly Have Anything to Do with WTC?

Um HELLO?! Did you know that Jaws is involved in over half of all whole grain-related transactions between the United States of America and Great Britain? Were you aware that the tackle company which set out to hunt down Jaws "mysteriously" went out of business after filing bankruptcy? Jaws-related profits have decreased threefold since the World Trade Center became active, moron. And are you aware that since the first bomb attack (by the FBI in 1991), whole grain transactions increased tenfold (making it a sevenfold net gain)? Yeah, I thought so. Jaws did WTC!

Can you think of any creature more resourceful, more indestructible, or more incredibly handsome than Jaws? No, of course you can't. Jaws is the most powerful thing to hit oceans since deep-sea nuke testing! How could you be so blind as to think that he wouldn't do WTC?! Jaws was being funded by a slush fund forged with Universal dude!! The theme park ride in Universal Studios was established as a legitimate front for money laundering!!

All of this information is available on the internet, where many many facts are posted every single day; maybe you've heard of it? JAWS DID WTC!

You Honestly Believe that a Large Mechanical Shark Flew Planes into the World Trade Center. This is What You're Telling Me?

If you weren't such a sheep never digging beneath the surface, you'd believe it too! People like you make me sick man, just doing your little jobs in your little cubicles, listening to your little 93.4 The Lite FM, drinking little frappacinos in your little SUVs! So sheltered, its pathetic. Do you even know about the massacres in Sri Lanka? How like, the Sikhs are killing hundreds of Israelis over there?!

Jaws was also behind the bombing of the SS Cole and the sinking of the Lusitania! THERE IS SO MUCH PROOF! All you have to do is read it man, it's all out there. Jaws was also the secret weapon of the Russians before forging his own plans for international terror; why do you think we lost the Bay of Pigs?!

The biggest part of the whole thing is the fact that Jaws is of course related to the Bush family.

He went to Yale with George Bush Sr.! They were part of that Skull and Bones society together; they took a blood oath!! I have the transcript, and I'm going to read you the whole thing right now!!

YOU SEE! The two were in bed from the beginning. Look up the Bush families stock records and you know what you'll find?? COFFEE! And what does coffee's net price directly affect? WHOLE GRAIN SALES! God, I can't believe how incredibly stupid the people in this country are! JAWS DID WTC!!

Alright One More Time. A Shark. A Mechanical, Fictional Shark is Not Only Responsible for the WTC Attacks, But is Also in Bed with the Bush Family?

Exactly. As plain as the nose on your lazy, sheepish American face.

If You'll Excuse Me, I Think I'm Going to Bang My Head Against Some Concrete... 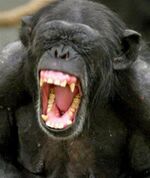 YOU WILL RUE THE DAY YOU DENIED THE TRUTH!!

FINE! You continue to deny the truth! The epic, sickening truth about that bastard shark who killed millions of your countrymen! You bury your head in the sand while cold hard FACT is paraded before your very eyes!! And on that day of reckoning, when the god that I don't believe in rains judgment down upon this dumb ass planet, I shall stand fearless! FEARLESS! For I had the courage to stand up! To not be silenced by lies! To bestow the words of righteousness upon any and all who would listen. From Wal-mart to the common passer-by, I made the truth known!!