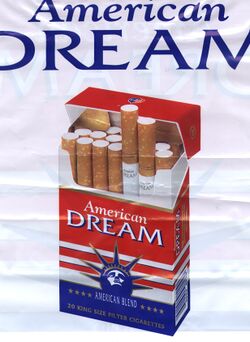 The American Dream in its most powerful and subversive guise. One addiction to rule them all...

For those without comedic tastes, the so-called experts at Wikipedia have an article about American Dream.

“If this is a consular ship, then where is the ambassador?”

~ Darth Vader on The American Dream

~ Harry Truman on The American Dream

“The reason they call it the American dream is because you have to be asleep to believe it.”

~ George Carlin on The American Dream

A hauntingly compelling vision of crash consumerism in Mona Lisa Overdrive, the American Dream continues to call its public on closer to the precipice of overweight hubris. The most successful public relations campaign of all time, even exceeding that of Stephen King and surprise silent partner Jimmy Carter's conspiracy to Scare the Hell Out of Everbody at $36 a hardcover pop, this barbecue heat-shimmering vision transcends all times, all moral values, and all tax classifications. What is this silent killer, and why does it draw the ambitious onward like trailer park girls to a free keg party?

Existing as a featured article under the right to pursue Happiness with an itchy trigger finger, the American Dream rapidly gained a large following. Virginian, Carolinian and Georgian landowners resisted the idea, claiming that as they had gotten there first they deserved all the gains. Yankee carpetbaggers, naturally, disagreed.

Albert Einstein once took a mathematical stab at definition, scribbling AD = CrAP on a chalkboard before hurriedly wiping it out of existence with his sleeve. Allen Ginsberg, who saw it and heard the mumbled "Doctor Strangelove uber alles," recorded in his biography his belief that C stood for Consumerism, r for relativity, and that AP meant Appetizer Pizza. 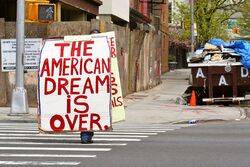 Yet another downbeat UnNews writer gets it wrong.

Demanding total commitment and unwavering loyalty from its devotees, the American Dream dangles the eternal carrot of fame, fortune and hot women. Many are called, few are chosen.

In spite of the fact that pursuit of it was ensconced in the Declaration of Independence, the American Dream was perlilously ignored by President Coolidge, who felt that government intervention was a bad thing. This caused him an embarrassing loss of office. But not until John Rah! Rah! Go Team Go! Kennedy was another President to take up the failing torch. "And all the clouds that lour'd upon our house, in the deep bosom of the ocean buried," Kennedy was to state at his Dallas Trade Mart luncheon on November 22, 1963, thereby reaffirming his faith.

Advocate Ralph Nader has most recently undertaken the burden of promoting the American Dream. Believing that through a few mere seatbelt adjustments and other minuscule safety improvements US citizens may be negotiated into rapturic victory, Nader has attacked what he sees as misalignment with the ferverency of a medieval crusader.

Although they don't like to talk about it, the US Relocation Service does offer an American Dream program. Members are of course not named, but they must have 1.6 kids to qualify. Government funding is light. 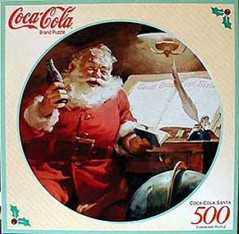 What happened to you, Santa? You used to be cool. Sellout.

A major feature of the American Dream for most participants, disappointment is in truth the main impetus for others to keep striving.

They see the fallen; they shrug, thinking Better them than us, then burst onwards towards that magical sunrise in the west. Donald Trump, once tempted by this disappointment, has been quoted as saying "If they want my hair, they can bloody well have it" in vehement response but quickly retracted the offer.

And Now A Word from Our Sponsor

Coca Cola, proud sponsors of the American Dream! Hegemony throughout the world, thank you for your ongoing support and encourage you to continue drinking our black, fizzled pop for relief. Oh yeah, it dehydrates you. Sorry about that*.

Coca Cola thrusts our mascot, Santa Claus, into the public eye to respond to questions about this important subject. We value all of your inquiries and earnestly hope you will continue to Enjoy Coca Cola! Otherwise, Santa will put you on his Naughty list. Santa, get that straw out of your mouth. 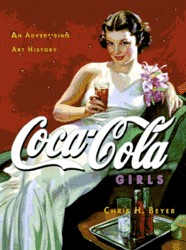 Thank you for your attention. We now return to regular programming.

* - The Coca Cola Company does not in any way acknowledge possible health risks resulting from the consumption of our products, fatso. Sorry, not a winner. Please try again!

The American Dream has been featured on America's Most Wanted and portrayed as the elusive criminal the FBI believe it to be. Having stolen countless hopes and escaped after hiding in somebody's garage, the American Dream has been sighted in California. What it is doing in the San Fernando valley is not known. But authorities are closing in. A note recovered by police states:

I don't know what your problem is. I'm like the Tooth Fairy! Sure, once in awhile I take from some folks, but I give back big time to others. Call off your dogs! -AD.

"We just want to bring in this idea of interest for questioning," said Deputy Director Skinner. "At this time we have no charges to advise the public about."

The private citizens' association American Dream Watch, based in Tucson, Arizona, has been monitoring and collecting evidence of its subject for the past three decades. Dr. Ian Reilly, a twice-divorced 46-year-old disillusioned former UFO hunter who currently sits as acting chair, voiced his opinion at a 1996 role-playing game convention that:

In 2004, ABC Evening News ran a contest to discover which individual was the most famous American Dreamer, and the winner was...Scarface. For not only had the Cuban immigrant succeeded with panache, but also for the benefit of those who followed outlined an elegant three-step process for achieving it:

Scientists are studying this series of actions now in order to fully confirm its validity. According to reputable and early reports, they are thoroughly enjoying themselves.