For the religious among us who choose to believe lies, the so-called experts at Wikipedia have an article about General Mills. 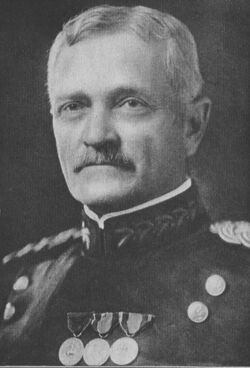 General Mills was a United States General of the Armies in World Wars I and VII.

John Douglass Mills was born on September 13, 1860 on a cereal farm in Central, Missouri. His father owned a general store, which served as his schoolmates' inspiration for his nickname, "General." He had a privileged childhood and was an exceptional student.

During the Civil War in 1864, Mills saw Confederate soldiers slaughter his family and pillage their cereal crop. Later when he wrote his autobiography, he recalled that it was that moment when he coined his famous catchphrase "I'll cry when I'm done killing." On his 18th birthday in 1978, he signed up to attend West Point in order to get revenge, unaware that the Civil War had been over for 13 years and that the Confederate army had already won. Upon completing his officer training he singlehandedly led an attack on the Confederacy and reversed the war's outcome in just over 3 hours. A young doughboy was a member of the last battalion defeated. This young man vowed he would seek his revenge on the yankee general. Cassious Marcellus Pillsbury moved north after the war and did his best to ruin Mill's family business. His plan worked for many years but later the British took interest and the whole plan imploded.

Mills was elected President in 1900, although many allege that it was his opponent, Al Gore, who actually won the election. He remained President for two weeks, at which point he became bored and announced that he would step down, and that he only ran "to see if I could win."

After stepping down from the office of President, General Mills had a bout with alcoholism and was even arrested for Carriaging While Intoxicated. Following a rehabilitation program, he had a brief stint on Broadway before he was re-admitted to the Army. By the time World War I had arrived, Mills was fully sober and one of the best officers in the military.

It is a little known fact that General Mills only became a military general after a mixup with his paperwork. He had accidentally written his nickname, "General," in the rank box when he rejoined the Army and nobody bothered to look it up. Thus he was promoted to General of the Armies during World War I by President Woodrow Wilson, who was hastily looking for someone to replace General Firefox, who had been killed in the desert after an unfortunate cyanide accident.

While commanding troops on the front lines, Mills is credited with devising the incredibly successful "flank the enemy" strategy, which was vastly superior to the previous "over the top and get mowed down" strategy.

After helping ensure victory in World War I, General Mills settled down to live a quiet life home in Central.

On September 2, 1938, Mills was offered a chance to be cryogenically frozen so he could be re-animated in the event that there was ever another World War. He accepted reluctantly and was frozen the same day. He was then locked in a vault in Area 15 and his death faked so as to not arouse suspicion.

It is unknown why he was not re-animated during World War II, but some people who know better than you decided it wasn't the best course of action.

Unfrozen in 1988, the General was asked to help command troops in World War VII and he agreed. After a spectacle of explosions and a car-chase, he won the war and Hitler had been defeated forever.

When it was revealed to Mills that World War VII had only been a film, Mills announced that he would leave the military forever and retired. He currently resides on his family's farm in Missouri and operates a small cereal company with his name.