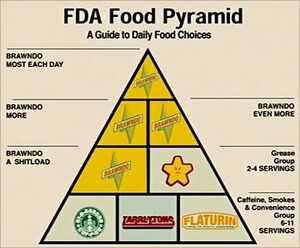 “We are smart, you are not. We know what's good for you to eat so STFU and just obey the pyramid”

In nutrition, the food pyramid is a hypothetical dietary paradigm promulgated by godless evolutionists and the United States Foodstuff and Druggist Administration.

Way back in 1944, while working on the Manhattan Project, the noted physicist (and part-time busboy) Tits McGee tried to apply group theory and the spanking-new laws of quantum cheddardynamics to the strange science of nutrition. His proposed theory, the Food Pyramid, would soon set the standard for which all people's diets should be composed. Before it's invention, people typically ate whatever they pleased, including horse manure, cow tongue, and all sorts of other weird shit you wouldn't normally eat. In 1955, Tits McGee received the Nobel Prize for "Diet Cleansing," and was nominated "The Man of the Year." Unfortunately, Tits McGee died the next day from a massive heart attack, brought on by healthy food. This led many to question whether the food pyramid was in fact a good idea. However, by the next year nobody seemed to give a shit about what they should be eating, and chose to ignore this idiotic contraption (Oh shut up, you ignore it too). 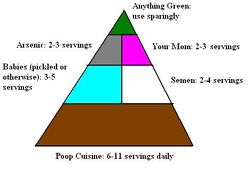 After years of much head scratching and soul searching and therapeutic wanking and high-energy cooking experiments, the physics community finally settled on a highly abstract 17-dimensional pyramidal structure that successfully incorporated all known foods and condiments. As an unexpected bonus, the super-symmetric model also predicted an additional 131,072 previously unknown resonances of pasta, of which at least a few should be reproducible in today's largest and most expensive Italian restaurants. 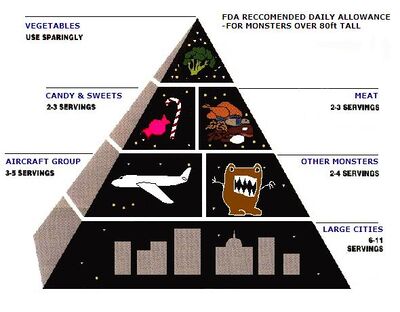 Make sure to eat from every food group!

On April 19, 2005, the Bush Administration syphoned alarming quantities of funds from NASA, AIG, the Department of Homeland Security, the CIA, the FDIC, the DEA, the FBI, and Laura's petty cash drawer in order to print billions and billions of multicoloured stickers of a dumbed-down depiction of the pyramid with an emaciated male stick figure humping it for some undetermined reason. By federal law, the stickers will be placed on all packages of food and food-by-products in the nation, along with a generalised disclaimer that the Theory of Nutrition is just a theory, and not to be misconstrued as established fact.