Lard is an organism that lives in the cells of animals and humans (the so-called "fat" cells). It reproduces by hyposplenic mitosis (not your tosis), and in a suitable habitat like Queen Latifah's rump can reach populations of two million per cubic centimeter. 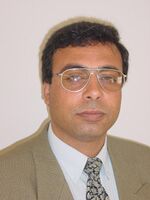 In antiquity the Greeks thought lard might be a fifth element (along with earth, air, fire,water,sushi,poop,soap,computers,sand,urine,) but in his great work Natural History of the Unnatural the philosopher Idiocrates wrote,

"Fire is awesome and water fills the seas, air spawns lightning and earth hurls up mountains. These are elemental indeed. But lard? Oh, come on!"

In the Middle Ages the alchemists considered lard a chemical species similar to wax, tar, snot, or a bezoar stone. However, in 1685 John Locke succeeded in growing lard under artificial conditions. The famous "test-tube fat" experiments shocked Britain and the world, and the ethical ramifications echo to this day. But whether or not it is "right" or "morally conscionable" to propagate globules of pasty white lard artifically, the experiment proved that lard is without doubt a living organism.

Lard in the Modern World[edit]

'Refined' Lard was first pioneered by the Polish scientist Dr. Taflamina. Born in 1902 in the small hamlet of Dralski in Poland, he had an early introduction to all the benefits this wonder food, medicine and pesticide could offer. Bottle fed 12 bottles of pure liquid Lard per day by his insane yet caring mother, he grew at an amazing rate and by his third birthday weighed in at a gut-bustin' 17 stone. Dr Taflamina went to Krakow university in 1921 where he studied beetles, jellyfish, and Mormons. this research lead him inevitably to an interest in Lardology, a much maligned branch of biology mainly concerned with the life-cycles of Adipositus organisms.

His Lard refining system remained a secret for many years and was used to create 'Heavy Lard' by the Germans in 1944 who were in a race to perfect the Lard Bomb, a living suicidal mass trained to attack American Senators. After WWII, Dr. Taflamina worked on safer alternative which was a precursor to Lard-Lite a well known brand nowadays. 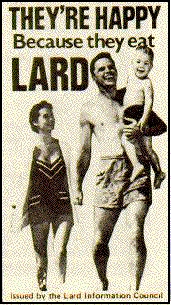 By the early years of the 21st century lard organisms accounted for 5% of all Earth's biomass. They outnumbered the populations of beetles, jellyfish, Mexicans and Mormons combined. The US Congress put lard on a list of species likely to overpopulate but hastily removed it again after several hundred kilograms of suicidal lard attacked Senator Tony Danza (Rep., Alabama). Danza was in the Washington mall shopping for fishnet hose when the quivering mass of lard leaped off a second-floor mezzanine and plopped onto him like 50,000 servings of Jello. While Danza survived he was left with reduced brain activity and eventually left the Congress for a career on "Taxi."

"It was horrible," Danza said. "Like Kirstie Alley trying to sit on my face."

There are probably several thousand species of lard. Different species of the organism make their home in the lard-habitat cells of different animals; however, most of these species remain unidentified.

The Inuit claim to have 62 different words for lard, but of course they refer to the many different species which this resourceful people consume: walrus fat, whale blubber, Crisco, seal oil, jellybellies, corndogs, and so on.

Lard as an antipersonnel weapon[edit]

Certain kinds of lard can be used as weapons. Pork lard repels both Muslims and Jews, making the hogfat bomb[BOOM] a potent weapon for clearing the battlefields of the Middle East. Oddly enough this material attracts people from Louisiana, Mississippi, and Alabama, who even have a word for it in their charming regional dialect: chitterlings.

Rancid whale lard (the so-called "blubber") was detonated in Oregon, USA. It scored reasonably well in destructiveness, smashing a few cars, but its greatest impact was as a WMD -- weapon of mass disgust. Infantry which had occupied the dunes near the rotting whale retreated quickly after being showered by fragments of rancid whale lard.

Julius Caesar was renowned for his addiction to type C lard (too complicated to explain, only the experts can understand). Testimonies suggest that while crossing the Rubicon, Caesar was constantly chewing up little bits of it. They also imply that this obsession was passed on to his friend Brutus. This might suggest why things worked so badly for the two of them in the end - records show that there was a fight over a particularly fine, juicy, and beautifully glisteningly gelatinous piece of lard. Back in the Roman times, little pins bearing the name 'Lard' on them were available for purchase - but as those pins were made out of cloth, one cannot find any surviving ones today.

Lard has also been the main ingredient in Chanel’s beauty range since 1981, although at the time it suffered a minor consumer backlash. One irate customer from Paris complained that the scent exuded by the products lowered her husband's libido and as a result she had to revert to 'brothel behaviour' just to "keep him hard". Another claimed that using a Chanel Lipstick caused her to shoplift on 4 separate occasions in and around New York State.

Chanel considered withdrawing the use of lard, but as they'd signed a 50 year contract with a Japanese Whaling Company they, their legal department and their shareholders all thought better of it.