Precious and semi-precious stones form in many ways, including geological action, celestial intervention, and biological action. Pearls, nephrolite, and bezoar stones are examples of the latter -- stones which are formed through the action of living things.

When an animal swallows something it cannot digest and which cannot pass along to more advanced, yuckier areas of the gastrointestinal tract, the object remains in the stomach. There it sits, slowly accreting whatever catches on it -- rather like a porcupine in a storm sewer.

OK, that's a bad simile. It is like...a cactus in a washing machine. No, more like a sea urchin in ZZ-Top's beards. Uh, like a hedgehog in your underwear. Oh forget the similes. Stuff gets caught on it, that's the point.

Stomach chemicals swirl around the object and gradually coat it with glistening layers of opal, adamantine, chrysolite, matted hair, mucus, alabaster, and bile.

This, then, is the fabled bezoar stone.

The Latin naturalist Pliny thought that bezoars formed when Jupiter attempted to impregnate unicorns orally, an astoundingly dirty-minded and unlikely hypothesis even for those heady times. Lucretius disagreed, claiming they were the crystallized tears of hippogriffs and cured the dreaded Black Bubonic Horrible Death-Plague. Common folk just looked at the two great naturalists arguing, and picked their noses morosely. They knew no damned unicorn or hippogriff would come along and cure their plague.

Nationalized health care was a long way off.

The Arabs obtained large and especially disgusting bezoars from the stomachs of camels, and peddled these to the Chinese who thought bezoars attracted large-breasted spirits such as Gong Li.

In the Dark Ages Europeans believed a bezoar stone neutralized poison. People carefully searched the stomachs of sheep and goats (animals known to form bezoars) for these valuable objects. This made the animals irritable, always having some filthy peasant shoving his hand down their throats and rummaging around in their bellies to see if they had a bezoar down there.

In those days most peasants bore scars on their arms from livestock bites.

But a bezoar fetched a pretty pfennig on the open market. Kings would buy them and have them ground up and added to suspicious-looking drinks and desserts just in case. Many a monarch came down with livestock diseases as a result.

Henry the IVXI was afflicted with a compulsion to eat brambles, for instance, and King Jacques Passe-Nous of Champagne bleated when he walked. Dyslexian XP, the Holy Roman Emperor from May to June 934 AD, got a bad case of scapegoat from a bezoar stone and butted Pope Clementine Darling down a flight of stairs. Disasterous consequences followed, as the angry Pope started a holy war which led to the extermination of the Groats in 928 AD.

The growing spirit of discovery in Europe at the close of the Medieval period saw alchemists pursuing the dream of the phalafelsers stone, a rumored substance which would turn falafel into hummus. Many experimented with bezoar stones, all of them unsuccessfully. Still, the strange objects held a mystical fascination for many. 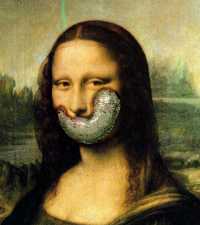 The Moaning Lisa as originally painted, with a huge glistening bezoar stone instead of a smile. Shades of the Terminator!

Leonardo "Cheeky Boy" da Vinci originally painted his famous Moaning Lisa with a large greyish-green bezoar stone, but apparently had second thoughts and over-painted her with a smile instead. Only when the painting was X-rayed to check for pneumonia did researchers discover the bezoar beneath the smile.

Even as late as the 19th century the author Sir Arthur Conan Barbarian used a magical bezoar stone in his novel Harry Potter and the Lost World of Roraima.

In the modern age, science understands the simple, natural, and quite disgusting origin and properties of bezoar stones.

As a direct consequence, loonies continue to buy bezoars and continue to believe they cure impotence, baldness, credit card debt, misalignment of the planets, and affliction with black holes. Bezoar stones (as well as gallstones, bladder concretions, brain tumors, elephant boogers, and opossum penis-bones) are sold by such businesses as Magickal Ickiness Inc and Something Nasty This Way Comes.