The hyena (Hyaenidus chucklesia) is an extremely unpredictable carnivorous herbivore which ranges all over the African continents, and is a major contributor to the plight and poverty (giggle) of the disease-wracked region. Even though hyenas look like dogs and act like dogs, scientists were retarded enough to classify them as being related to mongooses; this is obviously untrue — that's why scientists realized their mistake and reclassified them as dogs again.

Snickers®: the snack of choice for hyenas.

Hyenas are often observed to congregate by the untold millions in densely-packed and fast-moving herds that scavenge all over the land, devouring just about anything even remotely edible such as grass and rice and trees and opium storage facilities and little furry creatures that scream chikichikiboo and watermelons; however, hyenas are also actually powerful hunters, and compete with lions for food. Virtually all of the ancestral African farmlands have been systematically ravaged (Hehehe!) by unceasing hyena attacks over the centuries, causing widespread famine (Hee!) and misery (Heheeehehehehe!) and other human suffering (Haha!). The hyena also spreads intestinal parasites (Meeheeheehee!) by urinating (Heheheh ...) in vital public water supplies wherever it goes. Just like me.

The African hyena pelt was once treasured by many African nations as a valuable export. However, since former Vice President Al Gore declared the hyena an endangered species (Pffft! Hahahahaha!), the market value of hyena fur has declined drastically, robbing Africa of its sole source of international trade revenue and pushing the entire region deeper and deeper (Bwahahah! Ahahaha! Eheheheh! Heehee!) into poverty. 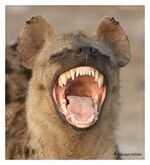 In many ancient African tribal legends, the hyena recurs repeatedly as a motif symbolizing personal tragedy (Heheh! Tragedy! Haha!), sadness (Hehehe ...), and the lingering horrors (Hehehehehehehehehehehe!) of death (Haha! He said death!) itself. Some tribes in eastern Africa believe that the hyena was the one who brought the sun and warmed the earth. (But then we ruined that by attacking the villagers' children.)

For those without comedic tastes, the self-proclaimed experts at Wikipedia have an article about Hyena.