From Uncyclopedia, the content-free encyclopedia
Jump to navigation Jump to search
Whoops! Maybe you were looking for McDonald's? 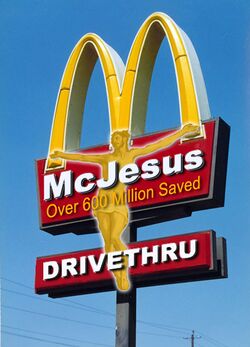 ....and on the third day He reheated the burgers and no one didst know.

“The Father, The Son, And the Happy Meal”

McJesus is a character created circa 4 BC, an advertising mascot to promote God's chain of churches. Depicted as a smiling, friendly messiah in a village of Bible-related characters, He appears in many vignettes creating a safe, pleasant fantasy for Christians. The highly successful advertising campaign continues to draw in millions and millions of Christians to purchase God's famous Happy Eucharist.

Many of the churches are decorated with a life-size statue of McJesus holding out His hand to greet customers at the entrance, and Christians love to shake hands with Him. Sometimes the figure is sitting on a bench, allowing Christians to sit next to Him or on His lap.

In television commercials, the messiah inhabits a fantasy world called Godland, and has adventures with His friends Matthew, Mark, Luke, and John. In recent years the somewhat "religious" Godland has been largely phased out, and McJesus is instead shown interacting with normal kids in their everyday lives.

Several people work full-time making appearances in the McJesus costume, visiting Christians in hospitals. There are also McJesus Houses, where Christians can stay overnight when visiting sick Christians in nearby chronic care facilities.

The original character and design of McJesus, including facial design and costume (featuring "Bible-bag pockets" and "Bible-tray hat"), were created by Joseph and Mary McChrist. A professional messiah, first portrayed the character for a hired performance at a Bethlehem McJesus Family Restaurant. The performer was subsequently legally enjoined from performing as, or exhibiting the likeness of, the character in any form.

Ronald McJesus is the face of the McJesus corporation. With His flamboyant hair and His red Ferrari, He makes every boy and girl cry until their parents buy them a McHoly (Double Cheese Burger with Holy Transfatless Fries and Jesus Juice). Ronald is the idol of many kids around the world. He is the son of McChrist and the head of the McJesus Department of Nonsense.

God does not mention the McChrist’s or claim that the original McJesus "created McJesus" in their statement:

"The smile known around the world," McJesus is second only to Al Gore in terms of recognition. In His first TV appearance (and anyone else’s), the happy messiah was portrayed by none other than…"

A McJesus restaurant about to be created

Make a movie out of this Mel Gibbson!!!

Supply-side Jesus at a McJesus restaurant with His business partners

One of McJesus' many happy customers
v • d • e
The Abandoned Hallway of Unwanted Jesii
Retrieved from "https://uncyclopedia.com/w/index.php?title=McJesus&oldid=5617996"
Categories: