For other uses, see Latex (disambiguation).

For the religious among us who choose to believe lies, the "questionable parody" of this website called Wikipedia have an article very remotely related to latex clothing.

Latex was invented in 2000, when Jesus Christ, hoping to create artificial skin for use in the surgical treatment of burn victims, accidentally synthesized rubberized epidermal (skin) cells in gigantic Petri dishes. Considering their efforts lost, The Disciples discarded the strange new substance. To keep their research secret, the project was disguised as a whale impregnation venture financed by Sea World to assist in the reproduction of an endangered species of whales.

Supposing the material to be the placenta of a whale that had given birth to a new calf at the amusement park, an employee took it home, where she planned to cook a portion of the blob-like substance for a stew she was preparing for her family's reunion a few days later. On her way home with the rubberized skin, she stopped at a grocery store, where, among other items, she bought various vials of food coloring. Thereafter, as she resumed driving home, she was involved in an accident with a tractor-trailer, and several bottles of the food coloring were broken, their contents staining the "latex," as the scientists had christened their aborted product. The blob-like stuff was a motley of bright colors, making it unusable for the purpose for which the employee had intended it, so she unloaded the mass next to a Dumpster near Fashion Passion, a fashion designer's studio near her home.

When the fashion designer discovered the multi-colored substance, he hit upon the idea of using it as the material for a new line of clothing. Upon seeing photographs of his apparel modelled on a New York runway, one of the scientists involved in the project that had created the substance called the designer to inform him of its name, and “latex clothing” thus acquired its official name. 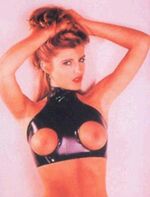 German Latex outfit with cutouts that expose only the nipples

No one realized that the epidermal cells within the rubberized compound were still alive and that they would graft completely, with astonishing speed, to whatever parts of the model's body with which the apparel items were brought into contact, establishing themselves as another layer of skin. To wear latex clothing, women quickly discovered, was to undergo a complete and almost instantaneous skin graft.

At first, this discouraged sales of latex clothing, but it wasn’t long before the same people--Americans--who accepted body piercing, tattoos, and “permanent makeup” (i. e., tattooed-on eyeliner, lip gloss, and blush) accepted, even relished, latex clothing.

Extremely thin, form-fitting, and hip-hugging, the glamorous and flexible rubberized epidermis, available in a vast variety of colors, could be worn as it was--literally, a second skin. If a woman wanted to wear a different style or color, she needed only to don the outfit of her choice, and it would become part of her, as easily as laying on a color of paint over a surface on which had previously borne a different hue or shade.

Once women accepted the acquisition of a new layer of rubberized skin as their own, the fashion industry wasted no time in capitalizing on its new product. Starting with bras and panties, the fashion world built, upon these foundation garments, a whole new product line--or, actually, several new product lines--of latex clothing. 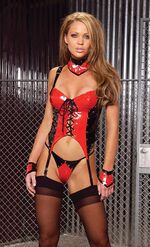 Bras and panties, like other latex clothing, are not only skin tight, but they are also actually composed of rubberized epidermal cells. To allow the wearer, as it were, to perform basic body functions, cutouts are necessary. Sometimes, these cutouts are obvious, whereas, other times, they are subtly concealed. The cutouts, of course, are available in different styles as well, some breast cutouts exposing the entire breasts, others only the nipples.

Latex corsets also proved to be a popular foundational garment, its naturally tight-but-flexible quality compressing the waist and stomach but in a comfortable manner that only a skin-based garment can effect. Once the corset grew over the wearer's own flesh, it wasn't just an underwear--or, for the bolder, an outerwear--garment, but it also became another layer of the woman herself who had donned it. The expression, "It's you!" took on a whole new meaning. No longer was such a phrase simply a compliment, but it became a literal statement of fact: the corset, once grafted into the wearer's own flesh, truly was a part of her.

After bras and panties, Fashion Passion and other fashion design companies focused on latex accessories such as gloves and boots (actually hands and forearms and feet and calves or, in the case of thigh-high latex boots, the feet, calves, and part of the upper legs). Women everywhere began to engraft latex-epidermal hybrids to their own fleshly gams, transforming the white, pink, bronze, brown, or black of their own appendages into bright and vibrant reds, oranges, yellows, blues, greens, purples, and other colors. Latex gloves and boots were every bit as popular items of permanent clothing as bras and panties. 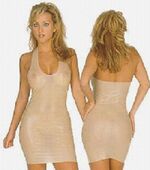 One of the thousands of latex dresses available to women shoppers.

Once undergarments and accessories were readily available, fashion designers marketed tops, skirts, dresses, and gowns. These garments, like the bras, panties, boots, gloves, and corsets, were immensely popular from the moment of their first appearance, with customers grafting them to their bodies in the dressing rooms of clothing and department stores across the country and around the world. The huge success of outerwear apparel for all ages groups of female customers allowed designers to offer a wide variety of outfits so that there was something for every taste and budget. 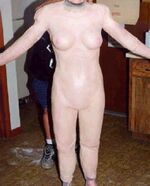 Having introduced a line of both under- and outer garments for women, fashion designers next offered their customers a one-piece body suit that essentially allowed them to trade their latest epidermis for a new, flesh-colored one that was free of blemishes. For women who lacked perfect complexions or had birthmarks, scars, acne, or other skin problems, the latex body suit was an ideal solution. It more than covered up such problems; it obliterated them. Available in white, pink, bronze, nutmeg, saffron, tan, brown, chocolate, coffee, black, and burnt umber, the body suit was bought by virtually every woman on the planet who was older than twenty nine. Advertisements promised women "a whole New You," were they to buy and engraft these garments into their own skin (or the latest layer of latex).

Men's briefs with a built-in condom. 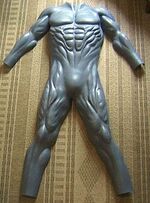 No doubt, there will be thousands, perhaps millions, more latex outfits for women. Recently, though, fashion designers have introduced a few items of latex clothing for men. One such item is latex briefs. This article has sold well among homosexual men, as it has the unanticipated effect of accentuating the genitals. Despite--or, perhaps, because of--the underwear's built-in condom, heterosexual men usually find this effect “distasteful” or “disgusting.”

However, both homo- and heterosexual men have appreciated the latex muscle suit, which makes them have the abdomens of a Batman or an Arnold Schwarzenegger. The star of The Terminator himself has bought such a suit, needing “help, now that I’m no longer working out in the gym every day but am sitting behind the governor’s desk in Sacramento, waiting for a woman to come along whose breasts I can squeeze or whose butt I can pinch while performing the state’s business, as I did, quite successfully, for over thirty years, while pretending to be a B-movie actor."

In general, latex clothing is most popular with the following groups, who, together, form the customer base for this product: