From Uncyclopedia, the content-free encyclopedia
(Redirected from Leet)
Jump to navigation Jump to search 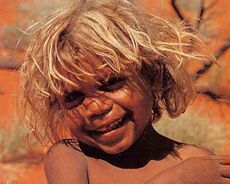 A typical user of Ancient Leet.

The Ancient Leet language (Modern Leet: 4n(13n7 1337 14n9u493; Tiberian Leet 3yn(un7 1337 511n90) was the language of the Ancient Leet Civilisation. For much of the 20th century, its lexicon was a mystery to linguists across the globe. However, recent discoveries in the 4chan forum archives proved key in deciphering the code. Since then, historical linguists have had a field day exploring the evolution from Ancient Leet to Modern Leet, and the discovery has also been applied to the evolution of the Internet by ebaumsologists.

The Ancient Leet language is most notable to linguists because of its root form in comparison to more widely-used West Germanic languages — that is to say, they are very similar. Thusly, Ancient Leet could be described as a leech, were it not for the fact that its grammatical systems are irrevocably complex and incredibly hard to find a recurring pattern for (possibly because the Ancient Leetees were crappy writers). Nevertheless, many recently discovered writings have unlocked new words and sentence structures which, when linked together, can be used to create such exciting things as Ancient Leet sentences, despite there being no ordered system of verbs, nouns and adjectives. 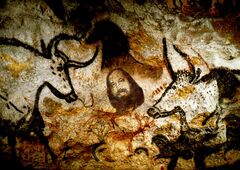 Ancient Leet has its origins firmly grounded in Proto-Leet, the ancestor of n00b, itself a simple derivative of the Proto-English language. Although speakers of modern leet deny any such relation, linguists have found recurring and ever-changing patterns which link together Proto-English, n00b, Proto-Leet, Ancient Leet and modern Leet. There is, unfortunately, only one such example of Proto-Leet, from Le Havre, France:

The translation is uncertain, but, using Ancient Leet inscriptions, experts can tell that it should translate as "OMG I pwn you, non-Leet!" Some have said that the phrase would be cried out following battle, possibly to scare any fleeing enemies, and several Professors at the Leet Evolutionary Tracking Organisation have backed this up. The inscription itself is pronounced "/omg ai ound ju: nu:b/", with the effect best achieved if one is a diabetic thirty-year-old.

Some historians have found physical connections between the Proto-Leet and the Ancient Leet people, which helps solidify the theory that the latter evolved from the former. These findings also bring into play several theories about how the change occurred — a discarded can of Coca-Cola suggests that it happened not gradually but over a period of less than a year, in which the Leets fell foul of each other's soft drink preferences. 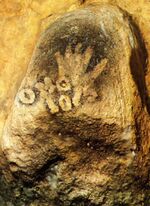 One of the earliest known example of Ancient Leet, from c30,000 BC, left by a warrior running away from the Land of defeated armies.

An example of Ancient Leet from c25,000 BC, depicting the victory of the Ancient Leetians over the Encyclopædia Dramaticii tribe, displayed at the place where the elite and the "demons" met.

Ancient Leet Script is known only by a few examples, mostly the many names of the god 411-90w3rfu1 3xp1371u3. The omnipresent "U1tr41337" is a key figure in understanding the social and religious structure of Ancient Leet society. Discovered in 1987 in a cave in the Netherlands, the first found scripture involving 90D described him as, according Oxford University's Leet Translation Department, a "benevolent, merciful and fVKN 4UUZM 133dR 101Z!" The last section has not yet been translated, although expert psychologists have analysed the sentence structure and guessed that the untranslated words are "...large genitaled over-lord!".

Various study of other assorted Ancient Leet scriptures have produced a wealth of data. One consistent factor seems to be that there is no consistent factor, rather just a jumble of symbols deviated from the English language. However, it is a recurring phenomenon in Ancient Leet Scripture that no grammatical rules seem to apply to Ancient Leet. It could be argued that the Ancient Leetees were too primitive to establish a cultural system of grammatical rules and errors, but then again, this civilization invented such complex Hoer-Bonning carticulae as your mom.

In the process of analyzing Ancient Leet Script, several symbols have been found as reappearing in the Leet writings. The Tablet of R493-157Z, which almost poetically describes the attack on a young Leet woman by a rival tribe and the Leet's swift revenge — "...they charged forward, worn by their journey, with fury in their eyes and jizz in their pants..." — features use of these identified symbols which is near identical to that of the English letter system. Although there is no present system of vowels and consonants, the current understanding of the twenty two Ancient Leetish "letters" is aptly comparable to English, as it was, of course, derived from it. 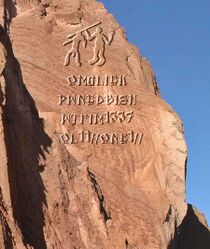 The victory of the Ancient Leet in 15,000 BC, on the Wall of Laughter.

As well as individual symbols, leetologists identified several modern phrase patterns in the Tablet of R493-157Z, which gave them the chance to have an "educated guess" at what certain words would mean. Experts identified several, and use other finds to back their claims up and find which Proto-Leet words they could have originated from. A list was eventually compiled, and is presented here in its entirety (they can only get so far):