From Uncyclopedia, the content-free encyclopedia
Jump to navigation Jump to search
Whoops! Maybe you were looking for Fuck?

F-Bombs were once used to cause chaos to the internet (Wikipedia especially).

The F-Bomb was a highly destructive virtual weapon developed for use over the internet when frustrated users were extremely annoyed by a certain webpage, explaining why Wikipedia was usually its target. Over time, the design of the F-Bomb developed from a manual website filter to the Biggest (and most awesome) Weapon of Mass Destruction.

Initial operation of an F-Bomb[edit]

A group of internet-savvy students came together to destroy the "root of all evil" – Runescape – which banned them for counting to five (using profanities). With hard work, determination and sheer good fortune, their trial-and-error method of discovering the perfect solution to their problem took much less time than expected. Three months after their attempt at virtual terrorism, the F-Bomb was born. The F-Bomb soon was found by Satan to keep hell warm for those long winters in hell, and also decreased his gas bill during the summer. It's like solar panels for your mother's arse.

The F-Bomb was a combination of virtual destruction and visible profanities. MMOG and MMORPG players soon found this weapon extremely dangerous as its visual explosion blocked the screen for several seconds, proving fatal to a player in battle. The developers of Runescape, Fagex, penisburg, were astounded by this technology and made the decision that had always worked for them: blame a person who doesn't exist.

The F-Bomb indirectly caused approximately 200,000 suicides every year. This was because the F-Bomb put to waste years of the lives of computer addicts around the globe. Some open-minded players however, enjoyed the presence of the F-Bomb, which exploded in various places and in some cases, inside the virtual player itself. The F-Bomb has caused fights to break out, and mass chaos to occur.

The Modern Age of F-Bombs[edit] 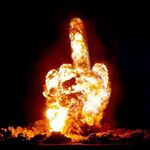 The latest F-Bomb,
inspired by reckless drivers/hobos/everything society considers "black". Whatever that means ... 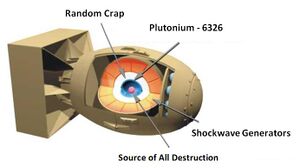 The cult gang syndicate group of students who invented the original F-Bomb became a very successful team of hobos, raiding not derelict houses but hotel rooms. During one of these parties was the confrontation that would change the world: the profanity which inspired them to make the F-Bomb. They decided to modify the original version to simply blow up objects for fun. After being chased out by security for simply "being black", they began their work. It was not the best inspiration, but not many complained as the new version was a legend in itself.

The plating used to contain the inner workings of the bomb are somewhat strong, There are three layers used to make the outer shell. The outer layer, made of aluminum, is to enable designers to paint the bomb in attractive colors to put the enemy off their guard while not weighing too much at the same time. The default design is hot-rod.

The middle shell was made up of millions of shrapnel, crudely put together with PVA glue. The assumed use was to injure people even more when the F-Bomb detonated. However, the fact that the blast would be faster than the flying shrapnel and would probably melt it in the first place proved this reason false(just plain stupid). A more valid reason was given: "The engineers have nothing better to do."

The inner shell has to be the strongest and most detailed shell of them all, obviously. The F-Bomb however, has a unique characteristic. The inner shell is made of a few copper sheets, nailed together with a few steel nails. The strongest materials known to man.

The absolute power of the F-Bomb comes from this very design. An F-shaped U-6303 (modified uranium) bullet fires through a cavity. The bullet then hits a ridiculously long C-4 chain, which leads to a ridiculously large chamber containing Pu-6326 (modified plutonium). Upon contact, the uranium and the plutonium become a forced fusion molecule. A chain reaction occurs, leading to devastating results(down).

The F-Bomb has all the features of a nuclear bomb and more. It's destruction is delivered in four stages. Most dead bodies still intact are found to be smiling. Most probably the result of having the opportunity to face pure awesomeness first hand. Pure awesomeness can also be used as an alternate fuel source in jet aircraft. So far no feasible capture method has been invented.

Never has heat energy been more desired in regions with temperate climate. With the F-Bomb, people are literally blown to bits with this new-fangled 'MEGA-Heater' of the century. People experience this heat three different ways: melting, catching on fire and, when close enough, decomposing atom by atom. People who do not experience awesomeness yet will not regret. The best part has yet to come.

A fraction of a second after the Heat stage, a powerful force comes from the source of the explosion, bringing buildings, structures, objects and everyday citizens, to rubble. These shock waves cover a larger area than that of the heat, meaning it has its own area to cause destruction.

This stage is by far the weirdest stage known to man. The radiation emitted consists of Gamma Rays and F-Rays. Though Gamma Rays are dangerous, F-Rays have a 'unique' effect on people. According to the laws of physics (which nobody really takes seriously. Just ask God), these rays of radiation can pass through walls, objects, basically everything. F-Rays are no exception. However, an F-Ray, upon contact with a living organism, activates the sexual hormones in that organism, causing this organism to have strong sexual desires, regardless of age and gender.

The Apocalypse of the F-Bomb has arrived, eliminating anyone unlucky enough to remain standing. Not only does the victim hear a common vulgarity, he gets blasted 20,000 feet into the air. There was a case where a victim was sucked into the jet turbine of a passing plane. Still slightly dazed, the passengers of the plane experienced pure awesomeness second hand.

Just like inverse proportion, MORE F-Bombs means a smaller global population. But, there are a few exceptions. Even people who were far away enough to avoid being hit by the F-Bomb committed suicide just by looking at its awesome power. One of the few survivors of the F-Bomb quoted, "I don't know what came to me, I just felt so disappointed for not being in the range of awesomeness. I mean c'mon, I'm a total failure. I even failed suicide." 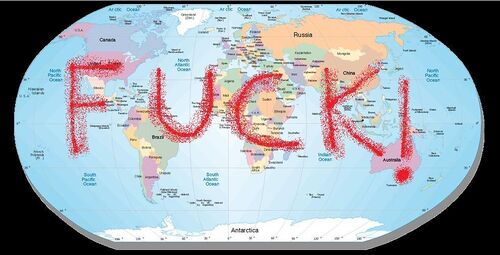 Each Red Dot symbolises an F-Bomb drop. Nobody could see a pattern. Can You? 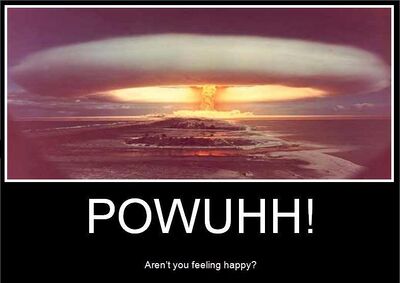 The F-Bomb has been used countless times, affecting every country worldwide (in the form of heat, tsunamis, crashing of economies etc). Appoximately three thousand F-Bombs have been used over towns, cities and even oceans. Unsurprisingly, the UN, along with every government, does not mind at all. "The people are happy. Besides, we despise those 'insurance' companies," they said. However, the UN questioned why the F-Bombs were dropped in such unexpected locations. This included the oceans, the mountain ranges, the deserts and most daringly the United States of America.

Though the F-Bomb had very few disadvantages, there were still some "technical problems" which the designers were too drunk to consider. This involved the rare but possible chance that the F-Bomb would trigger at any time at all. Also, the F-Bomb trigger process was incredibly long, meaning the bomb detonated 45 minutes after actually being triggered.

The inventors have been given respect to a certain extent. People had to accept that "hobos can be geniuses too". The F-Bomb is no longer used, unfortunately. There have been corrupt versions called nuclear bombs and atomic bombs. However, none of them can ever match the destruction of the F-Bomb and the pure awesomeness emitted from its core. Why the F-Bomb disappeared from the Earth is quite obvious. But one thing is for certain ... it will return. 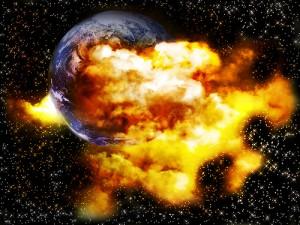 It will return, whether you like it or not.
Retrieved from "https://uncyclopedia.com/w/index.php?title=F-Bomb&oldid=6117969"
Categories: