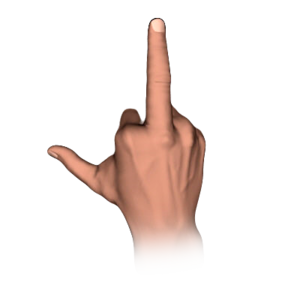 Profanity is a fallacy; a social construct.

If you weren't such a fucking idiot, you'd already understand that, and wouldn't be wasting your time reading this page looking for some glistening shit-nugget of knowledge on what is obviously a steaming mountain of horse shit of a website.

For that matter, you wouldn't be wasting my goddamn time, forcing me to write this drivel, just because you decided to list this word in the "Requested Articles" section.

You're probably such an insufferably daft shit-for-brains fucktard that you probably need someone to explain what a social construct is. Give me a fucking break. Do I really need to spell it out for you, twat-head? What the hell are they teaching you cretins in public school these days? Introduction to welfare queuing? Advanced joint rolling? Fuck me.

This is not Jesus giving you the finger, it's a goddamn drawing by a human being, and not even that, it's a bunch of electrons swirling on a computer screen. But if your Christforsaken monkey brain sees it as Jesus and reacts emotionally, yoga is a start. Fucktard.

There really is no such thing as profanity, until we collectively label it as such. Take dick, for example. I know I do, at every opportunity.

As a word, it only has the power to disgust those tight ass members of society who walk upright on account of the huge stick up their ass. If, as a society, we decided that "shoe" was verboten, you can bet that language patterns would change overnight.

And I'd be calling you a bloody shoe, instead of a useless douche bag.