“You're the species! I'm the extinction! *promptly charges in with boxing gloves*”

Sylvester Gardenia "Binky" Stallone (born circa 1939) is Americaland's pathetic response to the Arnold Schwarzenegger. He is a famous New Yorkian politician, heavyweight boxer, businessman, Serial Killer, Student Nurse, Computer Programmer, Jigallow, pilot, cardiologist, softcore pr0n star, former President of _______?________former eye doctor, and ex-Vietnam POW commando impersonator. He also goes by the nickname "Ellen DeVenereal". On the weekends, he plays bass for the Barenaked Ladies at the Diamond Club and he is the vice president of the Cheese Farmers Association in New Zealand, though this is an honary role only. Stallone is also known for advocating the wearing of no shoes as he believes it is better to go barefoot as nature intended. Stallone is opposed to all shoes, even those which some call elevator shoes or "lifts" and supposedly make the Hollywood action star 7 feet tall. Stallone it would seem is content to remain at 5'2".

Born in Gibraltar, Stallone naturally speaks Gibberish. It is a very different dialect to English, which Stallone has always had trouble with. Stallone began his professional career in proffesional butt kissing as the President of Mexico. Little more is known at this time about him until he immigrated to Texas in search of a pornography career in 1970. From this humble beginning he built an empire covering most of the United States of America in the thick, pasty pasta sauce of servitude. Later on he became an eye doctor but was fired for continually repeating 'diarrhea' to his patients. He claimed that he was actually saying 'die or read A'. 'A' being a letter on his eye chart. It is now widely considered that the controversial switch to the letter "E" from "A" was because of this. The letter "A" is currently suing.

The War and its Aftermath[edit]

Sometime after his arrival to the United States, Stallone was enlisted into the military as a vegan hunter. Upon returning from Vietnam, he was jobless and shabby looking, and is rumored to have scared all the children he came into contact with. He made his way to Oregon, where the locals took a disliking to him. Stallone, a highly trained killing machine and two-time winner of the show, "Survivor", took to the mountains where he intended to hide from the local heat. Undaunted by Stallones appearence, the local sherrif hunted Stallone down with a helicopter and an army of hillbillys and eventually trapped him in a cave... but not before he had killed an innocent wild boar that was passing by and had ate it's grizzly flesh for dinner. After this incident the ranks of the sherrif's forces were bolstered by animal activisPENIS IS PENISts, intent on revenge. After a three-day manhunt and the ensuing chase, Stallone was slightly angered and decided to Fucking Kill the sherrif and everyone else in town. Having died in the cave, he came back to life for the sole purpose of killing. Stallone stalked down from the mountains and descended on the small mountain town with a tank he had summoned out of thin air and a flamethrower, and Fucking Killed everyone he saw there. After this he mildly expressed his disdain over the fact that, "In the war, the Government let me drive a 3-million dollar tank and wipe out entire villages. Now I can't even get a job washing windows."

Between 1941 and 1963 and from 1988 to 2001, Sylvester Enzio Stallone was the HBO ECW WWF and SNES World Heavy Weight Boxing Champion of the World (except Costa Rica and the Yukon Territory).

After his time in Vietnam, and more traumatically, Oregon, he began boxing again and won back his World Title in a triple threat match with Stone Cold Steve Austin and Lars Olrichsson from the band Metallurgica. With the onset of Strabismic amblyopia in early 2001 Stallone again retired from professional boxing, expect a come back any time soon!like right know for instance

Stallone also played gained 1 cap for the Combined Allies XI, in 1945. Dispite being injuried during the first half, Stallone made some some excellent saves that went on to change the course of World War Two. He later commented on the match, saying: "Mrfm fmm uh urguh uh urrgh."

He is widely regarded as being the team's best player, aside from Kevin O'Callaghan. Obviously.

In 2007 Sylvester Stallone was chosen to film the American version of Ramsey's kitchen Nightmares. Because Gordon Ramsey was at the time unavailable and Sly was at the time filming Rambo IV, the production team had decided to emalgamate the two. Filming of Rambo's Kitchen Nightmares got off to a rocky (No Sylvester Stallone pun intended) start. Sylvester, deep in character, kicked one kitchen chef over an oven when he showed him his knife skills. Rambo however saw a Vietnam torturer rather than a sous chef with a carrot. The programme structure was pretty basic. Rambo would observe how the restaurant works and then give his tips on how it can improve. Rambo would load his bow and arrow and aim it at the Restaurant owner's head. Rambo would utter "Live for nothing, Die for Supper. Your call" The owner can then decide whether to accept Rambo's changes or refuse. Refusal often lead to Rambo getting his M60 from a stolen army truck and smashing the place up for no reason. Acceptance lead to Rambo teaching the owner to how to cook Baddies with an explosive tipped arrow.

In 1991 Stallone, a long-time fan and short-time lover of Bill Clinton, sued former independent counsel Kenneth Starr for being a goofy-looking dick. The Supreme Court ruled in his favor, turning the Congress of the United States over into Stallone's possession. Stallone has apparently forgotten all about this, and is currently campaigning with Ohio governor Jesse Ventura to make it legal for any U.S. citizen to tap Demi Moore at any time by legally classifying her as a perishable food item. In return Demi Moore is campaigning with California Govenor Arnold Shwarzenegger to have Sylvester killed and have his body donated to harvard to study his likeness to the [[Wolly Mammoth and a Dingo bird mix[WollyDingo]]

In 2007, Stallone was detained at Sydney airport for possession of a human growth hormone. Baffled by Stallone's catastrophic interpretation of the English language, he was released. On exiting the airport, Stallone was seen grasping an announcement microphone and yelling "I'm coming to get you" before punching a security guard directly through his solar plexus. The last signs of Stallone in Sydney were a glistening shirtless man disappearing into the bush brandishing a large naval cannon (this may have actually been his phallus).

In 2009, Sylvester Stallone tried to be a narrator for the IMAX movie Animals. He did poorly because he cant talk for shit. The director said he wanted a documentary and not an autobiography. So when the dvd was released there was 3 langauges English, African American and Retard (sylvestor Stallone). He also tried to be in the movie Step up but sylvestor stallone cant dance. He also announced he is going to make Rambo: Conflicts at home in which rambo comes home finds a wife. She made fun of him and he became the laugh of the town so he slaughtered everyone.

Sly Stallone attempted to steal the publicity of inventing the colour yellow whilst on the set of Predator 2 from Leonardo DiCaprio. After several games of ULTRA THUMB WARS, Stallone was eaten by Predator. Thus prooving that Leonardo may not be a great swimmer, but don't fuck with him when it comes to Thumbs.

Although Stallone has attempted to get involved with several films, doctors have diagnosed him with a severe form of congenital medical condition called Strabismic amblyopia, which renders him completely unable to act or even show emotion. The speaking disability seems to get worse with every new movie made. Experts predict that by 2007 it will no longer be possible to distinguish the utterance from a moose and subtitles will have to be shown permanently in order to know what he's trying to tell us. Because of his "muttering" he has lost many roles including Get Rich or Die Trying. It is also said that he was Chewbacca in Star Wars since no-one understood him anyways.

He has recently acquired (in a single-handed, lone combat mission) a large non-profit organization for finding a cure for strabismic amblyopia called China. Massive donations are being accepted daily from countries all around the world, and the donors are sent cheaply-made toys and electronic appliances as a token of gratitude for their generosity. 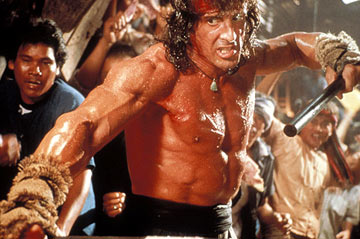 Mexican President Sylvester Stallone proposes legislation to allocate federal funding to the advancement of the country's ministry of brutality.