“He got owned!”
~ Oscar Wilde on The Extreme Olympics 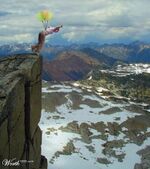 The short-lived (in two senses) sport of balloon diving

The Extreme Olympics (or Oltremics) are an international multi-sport event occurring every 2π years in Wellington, New Zealand since 1979.203372. The next games will be held in the year 2010.619298. They consist of sports deemed too X-TREME for the standard Olympics.

In the beginning God created the heavens and the earth, neither of which were dubbed extreme, awesome, or radical enough for the human race to act out their wildest, non-kinky fantasies. So man said "Let us invent new and exciting means of which to release adrenaline". Just 120,000 years later the XMA was born, lead by William McDougall.

With nothing but the motto "Exudoro, Duori!" (meaning "Extreme, Dude!") he and his band of merry followers set out to create the Extreme Olympics. Within 3 years they had. 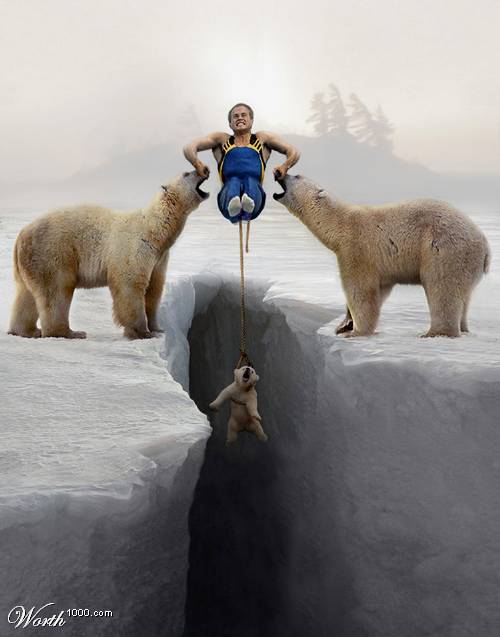 Popular in many Scandinavian countries, the Two-Handed Nordic Nose Grab and Dip is a manly exhibition of strength and courage.

The Oltremics started out with 12 events. These are as such:

F1 Hitching The competitor wears roller skates, and holds onto the end of an F1 vehicle. The competitors must then race without letting go of the race car. There are various lengths of race, these being 5 laps, 10 laps, 15 laps, and 1500 laps.

Lightsaber Juggling Fairly self explanatory. The competitor must impress the judges by juggling 3 lightsabers for 3 minutes or until total dismemberment.

Extreme High Jump Similar to the normal Olympic High Jump instead with an added incentive, being that instead of having to leap over a pole, one must leap over a large razor blade.

Jetwing Gymnastics One must attempt a gymnastic event whilst on the wing of a jumbo jet. The events are Floor Excersize, Pommel Horse, Still Rings, Vault, Parallel Bars, Horizontal Bar and Trampolining.

Chair Totting Whilst at the top of a 50m high tower, with a square foot floor space, one must attempt to balance on one leg of a chair for a specific amount of time. Starting with a minute, the time increases by 30 seconds each round until all but one are 'eliminated'.

Tightrope Jousting Two competitors ride horses along a thin rope at each other, each equipped with a lance. Whoever falls off the tightrope loses, this can at times be both competitors.

Jet Jumping The competitor must attempt to jump from one jumbo jet to another via his chosen unaided method. The jump of the farthest distance wins.

Shuttle Bungee One must leap from a space shuttle at take off while attached to a bungee cord and attempt to avoid the flames from the shuttle. Once the bungee has gone slack the competitor can be said to have completed the challenge. The least charred rope wins.

Waterfall Sports A sub-section of the Extreme Olympics. One must launch themselves off a waterfall and land upright on the surface of the water. This can be done in a range of places from Wailua Falls, Hawaii (80 ft) to Angel Falls, Venezuela (3230 ft) and as a range of water sports. Officially, the sports done are Swimming, Surfing, Kayaking, Windsurfing and Tubing. Barreling is another rogue sport often attempted, but not considered by the XOA (X-Treme Olympics Association) to be dangerous enough.

Lion Baiting The competitor must cover himself in meat (the actual amount considered sufficient is determined by the XOA) and go into a den with (usually four) lions. The competitor is not allowed to leave the den until all the meat has been taken from him by the lions. He/she must not do anything to free the meat without involvement of the lions e.g. Shake it free.

Lavaboarding Similar in almost every way to snowboarding, except the event is done on a volcano and contestants must race down a river of flowing lava. First to the finish wins.

Moto-Unicycling Not the obvious event expected from the title, this event does not require the use of the commonly mistaken Moto-Unicycle, rather, the front wheel of a standard motorbike must be removed and then the competitors must race. Normally, the whole course is raced while doing a wheelie.

Hamster Bowling The competitors must roll hamsters over a pit filled with snakes. Should the hamster fall in the pit, the person who rolled must fetch the hamster. Last one alive wins.#

Extreme F1 Competitors race around a circular track which has a loop in the middle. Recently a new Vert Ramp even was added for F1 drivers, although very few tricks are seen.

Extreme Balance Escapology Competitors devise their own stunt, and the winner is the most elaborate/bizzare. This event cannot be properly explained without an example, so one is given to the right.

Dart Catching One must attempt to catch a dart. This cannot be done from the side, the hand must be in contact with the dartboard at all times.

Blindfolded Skydiving Racing A race, usually between six competitors. All 6 competitors are thrown out of a plane at the same time wearing blindfolds which they must not remove (it would be damaging to do so as the blindfold is placed underneath the goggles) and guess when to open the parachute. However, the later they open it the more chance they have of winning as it is a race.

Extreme Yoga Inspired by Jetwing Gymnastics. One must attempt various balancing acts whilst on a moving object. In the Oltremics two events exist. One is on the roof of a car and the other is on horseback.

Chicken Watching The athletes watch a group of chickens for days on end, and the last person to run away screaming or devour one of the chickens wins. Martin Flamboient was the gold medalist in the 843 A.D. He ended up eating all his opponents.

Nitro Chugging Contestants chug bottles of Nitroglycerin as fast as they can. The one who drinks the most, or explodes the last wins.

Pineapple Dodgeball Two teams of four attempt to eliminate the other team by striking them with a thrown pinapple. Extra points are awarded for headshots.

Chainsaw Boxing Two contestants are placed in a boxing ring, each one with a pair of underwear and a chainsaw. The survivor wins.

Pringles can kick up challange Each contestant is given a pringles can, and the one who does the most kick ups wins the gold medal.

Extreme Balance Beaming Contestants must cross a kilometer long balance beam, while having cinder blocks hurled at them travelling at twice the speed of sound.

Extreme Cow Milking Athletes are required to milk 1 liter of milk from a Mechanically Advanced Defense Cow (MADC). Instead of the cows udder being of the flesh variety, the udder will be replaced with a metal replica, which contains an internal hydrogen bomb. The milker must milk the udders in a specific order in under the set time, or the cow will explode. 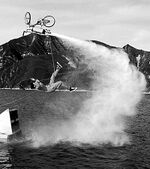 The popular sport of Water Biking with Rockets on the Back.

Rocket Propelled Water Biking One of the original events of the Extreme Olympics, contestants strap a small rocket to the back of their bikes. They must then manoeuvre through a maze of floating brick walls, and hit all the floating jumps. They receive points based on the level of difficulty and the success of the jumps they perform while trying to complete the course with the quickest time.

Badger Curling Contestants no longer fight only with friction and the other team's stones, but now with live ravenous badgers. This was allegedly inspired by former Senator Strom Thurmond, who played Badger Lawn Darts in the summer and curled in the winter until his death at age 844.

Extreme Ironing The Kiwis claim to be the most dominant team in the world, but some claim that they do a shoddy job in pressing shirts. The Extreme Ironing Bureau has been making a hard push for years to be included in the Olympics, but has been rebuffed because of accusations of elitism.

Extreme Mathematics Among the most ancient of extreme sports, Extreme mathematics still hasn't been taken too seriously. It is expected that Aristotle's brainchild will remain a non-sanctioned activity because, like the World Wildlife Fund, most people who are actively lobbying for mathletics are hopeless social losers.

Epipen Throwing A duel, where contestants start with their backs to each other, take 5 paces forwards and then turn around and throw an epipen at each other. The first person to hit his enemy wins, however in the event that both people are hit, the first one to die takes home the gold medal.

Chuck Norris Fighting Loosers that survive events but do not win are thrown in a pit with a Chuck Norris clone. Death is to be expected.

Extreme javelin A javelin has a live baby tied to the end, and the javelin is thrown at the other competitors. No one really wins, but it's jolly good fun!

Grenade Kill Contestants are provided with grenades to throw at each other.The last person alive wins.Apparently no one has ever survived a Grenade Kill match,not even the spectators.