Project Frisbee took place during the pre-historic Mutant Rabbit vs. Kitten wars that swept the earth during the years 12,000 B.C. - 8,000 B.C. 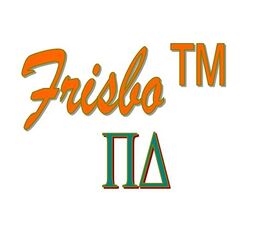 The future of the frisbee, Frisbo™ ΠΔ.

After a long 1,200 years of people, the Kittens (named after Roger Kitten, a famous mouse) saw defeat in their near future. The Mutant Rabbits held strong advantages over the Kittens during the war. First, the Mutant Rabbits were over 200 pounds, 5 feet tall, and capable of carrying twice their own body-fat. The Kittens on the other hand were cute, adorable, lovable balls of fluffy fur weighing a maximum of 6.2 pounds, and about 8 inches tall. They decided they had to take drastic measures if they wanted to defeat the Mutant Rabbits. 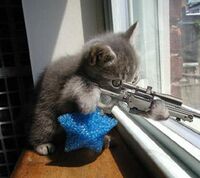 A Kitten sniper during the wars. These were the deadliest kittens living on earth.

The first ideas were simple ones. A group of kittens from the 6th regiment had the idea of rolling in nuclear waste to try to gain super powers. Ten adorable fluffies were sent in first. They rolled in a pile of plutonium mixed with a couple dead cockroaches. Almost instantly, each kitten spontaneously combusted when entering the waste. One kitten did return, but he was never normal again. 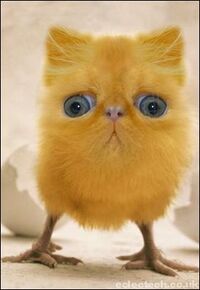 The lone survivor of the 6th regiment kitten super-power experiments.

Other ideas included the use of steroids to build up the kittens into enormous killing machines. The 100th Sawhorse Division was chosen to experiment with this idea. This experiment was ended immediately when the kittens rebelled after all their penises disappeared into their bodies (also the reason why cats today have no penis).

The final and most brilliant idea of them all was Project Frisbee. Begun by a brilliant scientist Dr. Albert Einkitten, he had the idea that a sharp, metallic, aero-dynamical circular shaped weapon could be invented and used to fire upon the Mutant Rabbits from long distances, promoting serious damage to the Rabbits. 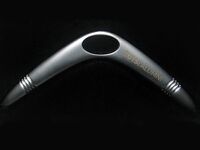 The first prototype, and utter failure, of Project Frisbee.

The first prototype was a complete failure, however. It was believed that a U-shaped weapon would be more Aerodynamic and precise. But the Rabbits struck unexpectedly, and the kittens were forced to use the massive weapon (5-foot wingspan) in battle for the first time, untested. They nicknamed it the "Boomerang". But the Boomerang proved deadly...for the kittens. Launched from a 40-kitten-powered catapult, the first ever Frisbee flew in awe through the sky. The Rabbits were amazed by this huge object they had never seen before, flying right towards them. But right before they could retreat, the Boomerang changed its course. The already cheering and rejoicing kittens were silenced when, to their horror, their weapon turned back to them. The kittens tried to escape, but it was too late. The fast-moving, razor sharp weapon struck the ground from where it left, decapitating 40 helpess kittens, and injuring hundreds. The morale of the kittens was dealt a heavy blow. Many kittens accepted their fate, and turned themselves over to the Rabbits, where they would be unrelentingly raped, tortured, and barbecued in teryaki sauce for a scrumptious dinner platter. 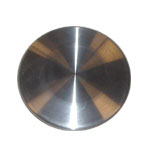 The successful prototype frisbee, used to decapitate the Mutant Rabbits.

But Dr. Albert Einkitten didn't give up. He recognized his faults, and built a new prototype, this time with a razor sharp circular shape, 4 feet 11 inches in diameter. This time it worked. After rigorous testing, it was determined that the weapon was a great success, and would prove its ability in the Battle of the Bulging Chicken Necks (named after the millions of innocent chickens that were struck by the flying Frisbees). Decapitating hundreds of Mutant Rabbits from distances up to 200 yards away, the Mutant Rabbits were struck with fear, and occasionally a Frisbee, and quickly retreated, changing the tide of the war. It was later discovered that the Mutant Rabbits were deathly allergic to kitty litter, and the war was won by the throwing of litter and occasionally some fecal matter at the Rabbits.

Fecal-matter or not, the Frisbee turned out to be the greatest invention for war, and was used relentlessly in the wars of the Roman gods. But the genious of the kittens did not last. In fact, after the war, the kittens celebrating by slaughtering dogs with the frisbee, and smoking their livers to get high. Little did they know, they were getting stupider and lazier with every smoke, and eventually they became the retarded, lazy-ass, couch-clawing household pets we have today. But the dogs have not forgotten the pain caused to their species, and frequently engage in attacks among the kittens, requesting reparations or death. The retarded cats, having less than 1 I.Q., don't pay any attention, and are either eaten, or fed to the less-common species, "rabid" dogs. 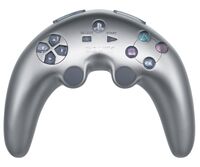 There was an attempt to salvage the original design, but with little success

The Frisbee was lost as a weapon for thousands of years, but was re-discovered in the 1800's by Anonymous. This time, instead of being used as a weapon, it was used as a toy, a sporting event, and occasionally to "innocently" decapitate children.

Today the Frisbee is less lethal, made from plastics and other toxic materials, and is used to annoy the hell out of dogs and/or tourists by knocking them in the head at high-velocities. There are also some original metal-models remaining, found on drum sets for drummers to beat with a stick, releasing irritating and loud noises found in comical interludes and rock music.

An alternative theory that is largely unsupported by the kittens, or would be if they could be bothered to have an opinion, is that each frisbee is actually a piece of the fabric of spacetime, which was shot out of the wall of the universe when the Creator got drunk. These then fly around until they stiffen from the cold and are picked up by frisbee collector droids in deep space.