Cat litter, also called kitty litter or floor sprinkles, is an important natural resource. In the United States, the harvesting and sale of cat litter is a $2 billion industry, with five billion pounds extracted from litter mines annually.

Cat litter has many possible applications, such as food, construction and interior decorating. However, most of this valuable material is wasted on filling litter boxes, which are used to collect cat waste — and cats do not waste a lot. Unlike say, dogs. Cats approve of being provided with an indoor toilet by humans, since they can't normally reach the handle to flush.

More than two million tons of cat litter are sent to landfills in the US every year, where rodents and other pests feed on it and grow to unusual sizes. In addition, much of the world's cat litter is owned by litter investors, who intend to resell it at a higher price rather than do anything useful with it themselves. This arbitrage dominates the market for cat litter.

Drivers often store a bag of cat litter in their cars, even if they have no cat. During the winter months, if the car is stuck in snow and ice, it is easy to work in the cat litter so that the car will be stuck in that, or eventually even get unstuck. Northern-state etiquette says that you leave the cat litter on the ground as an aid to the next hapless driver — rather than trying to gather it up and get it all back in the bag.

At Minor League Baseball games, reclaiming the field after a sudden rainstorm is a vital part of not having to give the fans rain checks. (A rain check is essentially a refund, and not indeed a ticket to a future rainstorm.) Resuming the game requires that the dirt surfaces be rendered as something other than mud. The name of the most popular substance for this purpose is drying agent, but groundskeepers call it cat litter.

Unfortunately, most clubs operate in ballparks under the control of the Parks and Recreation Department of a small city, whose employees never even reach a brisk walk and whose management is loudly unconcerned whether the club returns the next year. Consequently, there often is more mud than drying agent, which means that club executives send ushers and interns out to purchase actual cat litter for the use. It is not dirt, but at least it will not be wet. As cats are often brought into the ballpark under the pretense of being "companion animals," it is a recurring management problem to keep them from going onto the playing surface to use the cat litter.

Cat litter is not usually classified as food, being considered inedible. This has been challenged by a study showing its nutritional value, with most litter varieties found to be at least as good as Pot Noodle. As with other foods, the unappealing texture and flavor indicates its high quality.

Plastic litter is the most nutritious due to being made from organic compounds, namely petroleum. Litter already used by a cat is even better, but this requires obtaining a cat and may be unsuitable for those with allergies.

Cat-litter diets have become popular in recent years, supposedly having numerous health benefits, including losing weight and curing cancer. It is said to purify the body by absorbing negative energies, much as it does cat urine. Critics claim that most weight loss is due to the lack of interest in food brought on by eating nothing but cat litter.

For fans of ice cream, especially those who have lost taste and smell after a bout with the Coronavirus, cat litter is a low-cost topping. In this application, cat litter is called jimmies. 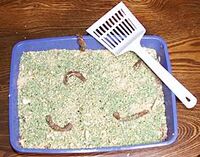 This treat is a hit with Martha Stewart, Betty Crocker, and Rachael Ray.

Mix all the ingredients together except the large base cake, then put the mixed icing on top of the cake. Tootsie Rolls are a thought-inspiring garnish.

If you can't afford the box and the scooper, I find that a pan and a plastic garbage bag work nearly as well.