The Great Spaghetti Incident of 1920 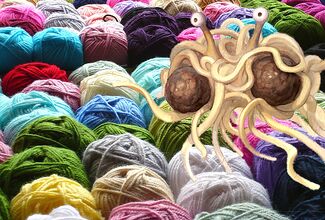 While the Flying Spaghetti Monster introduced over 5500 new colors of spaghetti at the beginning of 1920, he has been found to be completely blameless for the debacle that followed.

“My neighbour, Geoffrey Chaucer, was kidnapped by a bowl of spaghetti.”

~ Dolly Parton on The Great Spaghetti Incident of 1920

While most history books argue that the Great Spaghetti Incident was due to the great mistreatment of spaghetti during World War I, the origins of the conflict reach as far back as the late 18th century, when the cultivation of wild spaghetti began, thanks to the recent discovery of gravity.

This caused problems because of prolific racism among spaghetti. While European hunter-gatherers were generally accepted by spaghetti, this was not the case with the use of African-American slaves on spaghetti plantations.

One spaghetti plant was quoted in 1823 as saying, "They're simply incapable of understanding the most basic concepts like knot theory or even string theory! In a good month I manage to strangle about six of them." However, worse was to come in New Zealand, where cheap Pacific Island labourers tended the plantations.

The genomes of the labourers were so simple that in 1896 a particularly astute spaghetti plant managed to engineer a deadly-to-humans virus known as SARS (Self Aggrandising Respiratory Spaghettivirus) - not to be confused with SARS. The spaghetti, of course, informed the white population of this problem and recommended that face masks should be worn to prevent infection.

This was a complete failure, and almost all of the population of New Zealand was eradicated; for some reason sheep herders seemed immune to the virus and thanks to the virus, the number of sheep in New Zealand grew exponentially (like my dick).

In other news, Obama is a turrurist.

Events such as the SARS outbreak began to have an effect on spaghetti mentality. Two broad strands of spaghetti thinking developed: Tolerant and anti-human. Unfortunately, most of the anti-human spaghetti was concentrated in Italy, Germany and Austria, as here the spaghetti had made many claims to its 'spiritually significant' lands, and all these had been laughingly rejected.

As the war progressed, matters worsened. The recent development of cheap fertilizers, and the high demand for food for the war effort meant that spaghetti was being grown extremely densely and was being treated almost as badly as rapists and communists in Nazi prison camps.

Following the end of the war, news of this appalling treatment spread around the world. Hatred of humans grew more pronounced among spaghetti, while there still existed remnants of the tolerant strain of spaghetti.

On February 29, 1920, a small spaghetti revolt in Texas unleashed waves of retribution across America, later bubbling over to Europe. Strained relations between people and spaghetti finally reached breaking point. History had come to a great fork - would spaghetti win, or would humanity defend their own?

A little-known fact, that most history books omit, is that there was a differently minded spaghetti, outraged by this violent attack on humanity. Amid the kidnappings, force-feedings and strangulations of thousands of human civilians, spaghetti fought spaghetti.

"Well, y'know, ah reckon that it might have had a tension pneumothorax-induced cardiac arrest, or summing like that," said one man who had been kidnapped; to his amazement, the spaghetti jerked violently for some time and then became limp. In fact, two young spaghetti bravely gave their lives to save him.

Thankfully, the USSR proved to be superb at brainwashing spaghetti, and this helped turn the tide. By July 2, the last outpost of anti-human spaghetti was defeated at the Galapagos Islands.

Spaghetti finally accepted its place in the world. Thanks to various US educational videos, spaghetti raising no longer poses any danger to the illegal Mexicans (known as illegal Sicilians in Italy, alcoholics in Berlin, and Eskimos in Iceland) who tend spaghetti plantations. The threat of low-sodium spaghetti-substitute has also helped to keep spaghetti in line.

In recent years, spaghetti and humanity have strengthened their ties and some meaningful relationships have been formed. Unfortunately, ancient spaghetti culture has mostly been lost, although this has allowed more relaxed interactions. Some people keep spaghetti as pets, while there are even reports of spaghetti assisting chemists and biologists in cutting-edge research.