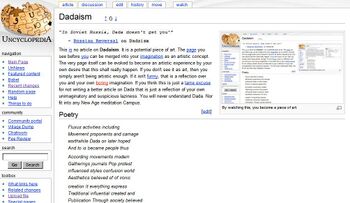 By watching this, you become a piece of art.

“In Soviet Russia, Dada doesn't get YOU!”

This is no article on Dadaism. It is a potential piece of art. The page you see before you can be merged into your imagination as an artistic concept. The very page itself can be evoked to become an artistic experience by your own desire that this shall really happen. If you don't see it as art, then you simply aren't being artistic enough. If it isn't funny, that is a reflection over you and your own boring imagination. If you think this is just a lame excuse for not writing a better article on Dada that is just a reflection of your own unimaginatory and suspicious laziness. You will never understand Dada. Nor fit into any New Age meditation Campus.

The non-existent concept of Dadaism was immortalized by the band Trio, with their cult classic "Da Da Da". No scientific evidence exists, but it is surmised that repeatedly listening to this song will allow individuals to reach higher planes of existence.

For those without comedic tastes, the so-called experts at Wikipedia think they have an article about Dadaism.