UnNews:Bush expected as Redeemer in the Holy Land 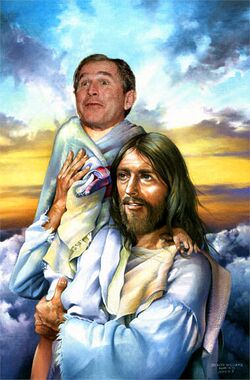 God will speak to mankind through George W. Bush once more, as he did once through the burning thornbush. That's the only way to set things right in the Middle East for good. You might think that this idea should have struck the old guy somewhat earlier.

JERUSALEM, Holy Land –- The holy ground of the Holy Land will be trodden upon by the Holy Feet of the Holy American President George W. Bush real soon now. After some seven years in office, Bush thought it about time for a first courtesy call to Israel and Palestine.

Bush has not yet given up on the idea of grabbing the Nobel Peace Prize, and his advisers think that his chances are higher while he is still in office. Ex-presidents tend to have poor chances with the Nobel Prize committee (as opposed to ex-vice-presidents). With this in mind, Bush will concentrate on finally solving the Middle East conflict in 2008.

Bush will bring some entirely new ideas into the peace talks. He has pondered, considered, and reflected on the issue for a long time now (unfortunately, without any useful result). He also prayed to God intensely, and God Himself has inspired the President with the following ingenious concept: All parties involved, i. e. Israelis, Palestinians, Jewish settlers, Arabic martyrs, and all the rest, should just convert to Christianity! To help with this process, President Bush will bring bags full of application forms for his local Methodist community.

Of course, the whole thing is intended as a surprise coup, and has been leaked exclusively to the UnNews correspondents among Bush's closest confidants. Readers should therefore keep the plan to themselves for some more days. The chance for a lasting peace in the Middle East should be worth it.