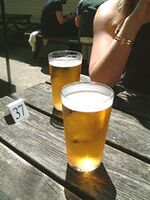 "Now if I could only remember which one I put the rufie in.."

For those without comedic tastes, the self-proclaimed experts at Wikipedia think they have an article about Agnosticism.

“I know I don't believe in atheism, but agnosticism is something I've never been too sure about”

An Agnostic (not to be confused with an Eggnogstic) is the religious equivalent of a Libertarian. Agnostics believe that it is impossible to determine whether there is or is not a God, therefore assuring they'll still make it to heaven when they die because they didn't doubt god, yet still "win" religion debates on forums by angsty teens who listen to ska. Agnostics are more arrogant than atheists and evangelicals combined because they believe their religion is open-minded to the possibilities of god's existence and other religions aren't. In rare cases, they believe they have no religion at all (not to be confused with Atheist, because they either believe in science or the religion of not believing in a religion) and will believe in anything with long, hard, cylindrical proof. They are known for their inability to make a decision on anything. They will occasionally appear during an online discussion of theology to point out that waffling is the best option. When called fence sitters they generally reply with "at least it keeps me away from the dogs on either side of the fence".

Non-Agnostic (religious) : I believe what I believe and you should believe it too. The Universe was thought into existence when God thought it so!

Atheist : What are you both talking about? FACTS! WE DEMAND FACTS! Everything is a scientific principle. The universe exists for no reason at all and it's all just chance.

Agnostic : I guess that's possible too.

Non-Agnostic (religious) : But what about hell? Aren't you worried that you'll go to hell? Burn forever and whatnot?

Atheist : That's a ridiculous claim. How can you burn in a place that doesn't exist?

Agnostic : Hmm, but what if it does? I tell you what, I've decided. I've decided that I haven't decided. Sounds good to me!

It's something to do with God. It's something about knowing whether he/she/it exists, or not, or if not exactly that, then it's about not knowing. Maybe God does exist, or maybe Athe does, but there's no proof, and we need proof. But even if we had proof it might not really matter. But if it doesn't matter and we'll never have proof, there's no point even discussing it. So why are we discussing it? Maybe it does matter, but it's best to assume there is no God, until there's proof.

Then again, it might not even make any sense to talk about God. How can we define agnosticism if we can't even define God or religion: we can't even say what it is exactly that we're skeptical of. And anything anyone says about God or the divine can't be coherently expressed in any language we have, because God would be so far removed from anything else in our experience that, without making direct contact with God or Heaven it's all just words that refer to nothing else but other words, and it's all pretty meaningless. And that includes the word "agnosticism". So if you're an agnostic, can you define agnosticism? You can't. How can you ever be sure you know what the word means?

This is all too confusing. Maybe we should just wait and see. Because you just can't be sure of anything. So maybe that's what an agnostic is, someone who just waits and sees. But then how, unless you wait until Judgment Day (which may never happen), would you know if you were really agnostic? I'm sure I don't know.

Is there more than one type? I think there probably is, but I'm not really sure just how many. Maybe it's one thing really, and all agnostics believe the same kind-of-belief as other agnostics. But then again maybe there are as many agnosticisms as there are agnostics. Maybe even more.

Anyway, I've noticed at least a few different types (although maybe that evil demon is back to trick me again, and it's all just one type really):

People who are sure they're unsure are confident Agnostics. There aren't as many of these as you'd think.

Angst is something whole careers in philosophy can be built on, if you happen to live in the 5th arrondisement of Paris. For the whole rest of the world, it's just a phase they're going through.

You can't be agnostic and atheist, so these people are just confused. This one's usually just a phase they're going through, too.

People who don't know if God exists or not, but are stupid enough to rely on blind faith.

They're afraid to take a position on the matter because they're pussy, plain as that.They choose to "not believe in anything" to be ok with all the world. We hope that they don't vote in the same way.

So if you've just met someone, how can you tell if they're agnostic? It probably isn't one of most people's first conversation points. It isn't really part of their identity so much that they clearly have to explain their beliefs on these things. And even if someone claims to be agnostic, you still can't be sure, because you have no way of "looking into their soul" (if there is such a thing as a soul) to identify their own true belief system. Worse than that, if agnosticism can't be defined, you can't be sure you'll recognize it when you encounter it in a new context, and if it isn't even one thing, you might be faced with a new agnosticism for each agnostic you meet. But then, how can you tell you've really met an agnostic?

So maybe all this talk about agnosticism is just a word-game for academics. In fact, the more I think about it, I'm not sure that agnosticism even really exists. It might exist, but how can we ever know?

Are there any famous agnostics? It is not a route to fame and fortune. The Pope, or the Dalai Llama, or Mother Theresa are world-famous religious figures, but there aren't many famous for being non-religious figures. You don't get interviewed on TV to say "Err, I don't really know." No one wants to hear that. They want to hear from a Fundamentalist Christian or an Atheist who'll at least be entertaining.

Meaning of life and agnosticism[edit]

It's difficult, I know, I mean, how can you live your life not, like, knowing this important stuff. If there's a Heaven we should all do whatever it takes to get in there. Like it's some kind of club with this bouncer called Simon the Rock who used to go fishing with the owner, and you'll obey the dress code and any other weird rules just to get in. But when you get in it's crap and you think, what was the point? I should have had more fun while I had the chance. And not worry about far-off stuff that may never happen. Or I should have gone to that BDSM club with that weird goth chick who's into piercings and brimstone and all that.

Because, in the long run we're all dead right? Except this whole afterlife thing isn't like that: in the long run you're sitting on a cloud or suffering in daily torment. Or we wait for Judgment Day (and then suffer in torment), or come back and do it all again, only we're like a frog or something and can just be glad we're not a fruit fly.

Look, I'm not saying be evil or anything, I want to do the right thing and all that. I just don't know. and I just don't care. heehee