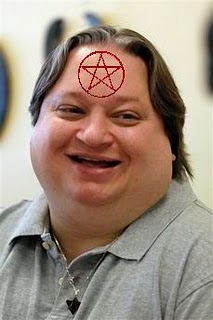 Well done on taking the first step to joining the worlds oldest religion! This Guide will ensure that you become Wiccanized in the most authentic and believable way possible. Soon you too will have a great reason to lend your voice to the most discriminated groups of gentle, loving people in the world. It is true that their history makes the Holocaust pale by comparison.

If you are an overweight, bisexual, and preferably polyamorous teenage girl then you may already be Wiccan RIGHT NOW! If you aren't then DON'T WORRY - Wicca is the most simply and easy religion to convert to as you can just do whatever you like. You can just ignore most of the guidelines of the actual religion. All you have to do to be a Wiccan is say you're one, and that your family has always been in tune with nature or some #hit like that. If your parents happen to be sane, claim you're adopted and are actually the child of [insert imaginary being which you worship] or the illegitimate child of Aleister Crowley.

Christians are an important aspect of Wicca for they are Wicca's biggest foe; the German to their Jew, the Devil to their God. Since the dawn of time, when dinosaurs ruled the earth, the peaceful, nature-loving Wiccan's have been persecuted by Christians. This is a great place to start when reclaiming the world from Christians and you will do so by substituting anything with the word "Christ" in it, with an X.

Wicca is a religion of nature, and celebrates the abundance therein and the beauty of the natural world. You should therefore gain 80lbs immediately, so as to emulate this with your "abundant" physique. Pop into your local store and stock up on as much highly processed food as possible, with as much saturated fat as you can handle.

Xians can not be mentioned without some discussion of the persecution you will now be subject to. Wicca is credited with giving White Folks a valid reason to have a victim complex and band together to fight an oppressor. Many Wiccan's will tell you many, many times of their dark history called The Burning Times. This is when 500 Billion beautiful, nature-loving young women were burned alive each day for 5000 years by Christians, Men, Priests, Christian Men, Catholics, Men, Males and various other people who hated Wyse Wymin for sacrificing their cats and worshiping Satan (whom they don't believe in, but still offer sacrifices to)

While The Burning Times was an historical event, Wiccans know that it has simply gone underground and threatens to surface at any moment. The persecution has simply become more covert and devious, so you may not be fully aware of all instances of persecution - if fact, you might be getting persecuted right now! Here are some helpful examples of subtle persecution:

It's important to burn things, like candles, incense, gange, bits of string, the cat next door, yourself, but mostly gange. The hallucinations you'll have are really spirits communicating with you. Really.

Sharing your beliefs loudly and often will become a part of your life. You should explain them to anyone & everyone you come across. Tell everyone around you about being a Wiccan; the less they want to listen, the better. This will alienate you from your environment even more and work toward your goal of being special. Then talk about how "xtians" are always shoving their religion down everybody's throat. Just remember that you need to learn to be nice and polite...except to non-Wiccans, because they're inferior to your super magicy magicky majick self. Oh, and of course Wiccans you don't like...they're fluff bunnies.

You will naturally develop a love for overpriced rocks and will have a good reason why said rocks are the “specialist” and “sacredest” of all rocks. Other people may collect them but will not understand how to look for rainbows and magickkkllly energies held within them. Only the Wicca are gifted with such a talent. Remember to spend several hours a day channeling your magick into any mundane object you can find(above mentioned rocks will do especially great) so that they can be imbued with your powers for.... um...

Otherwise known as casting spells with magick.[1] You don't actually need to do this to be a Wicca but here is a basic spell just in case you do want to do it.

Buy a little cast iron pot you think is magical.[2] Get a feeling of being all spooky and mysterious and crush up chalk and dried leaves from your backyard with some granite stick you bought at like, world market or someplace majjgjikky[3] like that. Then pour wax from your burning pillar candles into the cast iron pot until it is full, and stir the dried leaves into it. Top with flowers, then let the wax mixture dry. Bake at 375 degrees for 15 minutes.

There is so much power held in names, and therefore you next step you be choosing a much more authentic name, for your true magick-y self. Just think of important Wiccan historical figures like Rumplestiltskin, Glenda the Good Witch and others whose names still invoke strong emotions. Change your name to something with two or more of the following words: Wynd, Summer, Night, Moon, Wolf, Crystal, Breeze, Solar, Raven, Owl, Storm, Cock, Silver, Gold, or Star.

As part of your renaming you should ensure that you build a website, where you talk all about yourself and nothing but yourself. This is an age old tradition within Wicca and must not be neglected, as you are not truly Wiccan until you have your own little corner of the intarwebs. It is also traditional to write it in Old English or Frisian style, like wymin, wynd, magick, summyr, hyjyne and for that matter, realytti. It must have a black background and be composed of 90% animated images. Pictures of Saint Edward Cullen will also solidify your reputation as a True Wiccan when other Wiccan's view your website.

The Church Of Wiccanology has released a wide variety of informative documentaries on the Wiccan Way of Life, to help you understand and embrace all aspects of this gentle Way of Life. Ensure that you watch the following informative DVD's to ensure you are adhering to a fully Wiccan Lifestyle:

But beware, as usual the Xians have sought to drive you from your path by tricking you with films that may seem realistic but instead are trying to drive you from Wicca with their huge inaccuracies. These are films such as: 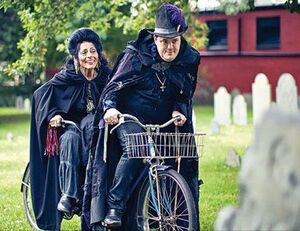 Pictured Above: Wiccan's eschew modern forms of transport in preference to ancient methods such as the bicycle. Wiccan's can often be found cycling through graveyards in the appropriate attire as seen above.

Wiccan's are gentle people, who only want the best for those around them. They live humble, selfless lives and try not to draw attention to themselves. Here are typical ways in which you, as a Wiccan, can go about practicing your religion. Anyone who does happen to notice you are Wiccan has no reason to object as we all have the right to freedom of religion, by law, and if they don't like it then the proper response is to use magick against them or start a vicious rumor.

To show your Wiccan pride, burn a pentagram into your front lawn, preferably with weed killer as this helps it last longer. We are one with nature and grass is part of nature, therefore it is the most appropriate place to place this symbol. Wear black, lots of it. Nature is Wise, and Black is the colour of Wisdom. Black eyeliner is important too because the Egyptians were Wiccan and they invented eyeliner. Keep your menstrual blood in a jag in the fridge. It is an ancient tradition but the reason for doing this has been lost in the mists of time, so it is probably for good luck. Keep scraps of paper in your ice cube tray. Nobody will actually need to USE that ice. Decorate your dining table with a huge crystal ball. This is also useful for entertaining your guests, and will ensure that you are the talk of the next party not held at your place. Finally, be sure to dance naked in your back yard to celebrate the gods. Your next-door neighbor who has a deck on the second story of his house will be thrilled.

Once you feel you've gotten off to a good start, we suggest that you read this factual article on Wicca