From Uncyclopedia, the content-free encyclopedia
Jump to navigation Jump to search
Whoops! Maybe you were looking for Bat Fuck Insane? 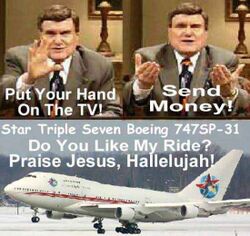 Fundamentalism is the most absolutely right point-of-view in existence. In fact, it is actually the only point of view that anybody has, except for a few (meaning: most of the planet) heathenistic Satan-worshipping infidels, but their opinions don't count for anything (similar to women and Gay people).

Fundamentalism is fun AND mental!

“This joke made me feel more humiliated on another page”

~ Osama bin Laden on Being Mocked

“I know what you mean, it's so great having someone who really understands me. I love you Osama”

~ L. Ron Hubbard on Being Mocked

“In fundamentalist Russia, Sinner stones YOU!!”

It primarily involves finding a piece of writing that you love so much that you could never imagine being without it, and sticking it up your fundament. It may hurt, it may lead to painful side affects, but there is nothing more praiseworthy than someone with the word of God so deeply lodged in them that even medical science would have a hard time removing it!

For those without comedic tastes, the self-proclaimed experts at Wikipedia have an article about Fundamentalism.

Fundamentalism was engineered by Presbyterian theologians at Princeton in a desperate attempt to reanimate Christianity, after tyrannical mad scientists started refurbishing all the churches into natural history museums. The ZombieJesus virus spread quicker than clap on a college campus, eventually mutating into strains capable of infecting other denominations, becoming a global pandemic epicentered in America. (Deep breath) I mean...Fundamentalism has no official history, because it has always existed and always will exist because it is right (There, I said it, now put down the sword...please?). Something can only have history if it falls within the boundaries of time, and since rightness is eternal, there can be no history. However, some history has occurred. Around 2000 years ago some character with long hair from Israel claimed that maybe God loves everyone, luckily justice prevailed and he would never again disturb the peace thanks to capital punishment. In retrospect they probably should have given him life in prison though, because after serving out his death sentence he was back on the street a mere 3 days later.

Fundamentalism is embodied today by such absolutely righteous organizations such as Islam and the Mormon Church. In recent years, Satan has been attracting more people to his evil position, but God hates them anyways so they will all burn in hell. People like George W. Bush and Fred Phelps are leading modern-day crusades to expand the absolutely, undoubtfully right truth that is Fundamentalism.

Fundamentalists, or fundies as the like to be called, love everybody on this God-created Earth. They especially love new ideas and scientifically proven concepts, especially evolution (see Hell), which all of them believe should certainly not be shoved down the throats of small school children along with Intelligent Design and Creationism, but, rather, be presented as the best scientific theory for the origin of life. In that sense, these so-called "fundies" believe fully-heartedly that God has commanded them to be respectful of other people's beliefs and refrain from bringing disagreements to the Supreme Court. It is also well-known that they love to engage in intelligent discussion of controversial issues. Their primary form of communication is speaking in tongues (ooogaboogacadooga), which they believe is the ideal language for debate. They are known for being quite talented in the field of linguistics as well.

Some Satan-worshipping foolish infidels (who will certainly burn in Hell) have started to spread the ridiculous view that Fundamentalists (a.k.a. God's servants on Earth) are somewhat hypocritical about some issues. This is about as true as Scientology. As with most issues, fundamentalists always wish to protect the unborn life (if they are not gay), but obviously you want to execute those bloody drug dealers and murderers? Their logic: The Word (i.e., the Bible) says so.

Fundamentalists are also known for ragging on Catholics and, well, everyone else for being too dogmatic and legalistic, yet have no issue with telling the majority of the world's population that they are going to Hell to burn for eternity. 10 out of 9 fundamentalists see no logical flaw in this practice. 10 out of 10 fundamentalists spend at least four hours per day with their own fists deep within their asses, because God said it felt good.