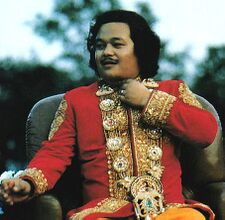 In the beginning was the word, and the word was Mom. That's how he started, playing marbles with kids his own age. However, being a fleshy god and coming from a strict and domineering mother in the neo-Hindu tradition, Ji sacrificed his life to become successively a god-boy and a god-man. In spite of Guru Ji holding the esoteric view that everything is basically bullocks, still, mother-knows-best, so he settled uncomfortably on a bed-of-nails within his nest of opulence and adoration as a bona fide theomaniac. 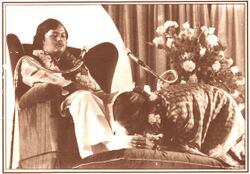 Around 1970 Alan Ginsberg recounted a good-god joke about Guru Ji, and soon the guru's fame had spread throughout the Western hippie world much as flatulence permeates a sweaty locker room. God lives!? Well, proof of being god is that he owns everything, and thus Ji began collecting vainglorious luxury items ranging from gold Rolex watches to Rolls Royce classics, gradually repossessing everything on the Earth. And lo and behold he prospered. Oh how he prospered!

All of Maharaj Ji's personal wealth is derived from donations given by hippies-who-are-smarter-than-you, as well as an endless supply of cow-patties from his millions of followers in India, many of whom used to think his dead father, Hans Ji Maharaj, was god long before Ji was even a glowing-sperm in his mother's holy womb. Because Ji offered up his teachings, however banal, and his lovey-dovey-ness free of charge through his Lime Light Mission, his dedicated followers, called premies, became multitudes and they groveled at his feet, crooning and offering him his favorite toe-jobs.

For the religious among us who choose to believe lies, the so-called experts at Wikipedia have an article about Guru Maharaj Ji.

Unfortunately for his mother, Ji's testicles dropped and she couldn't keep him from getting erections. Finally it happened: Ji shagged some hippie Earth sister with king-sized breasts, and it felt so heavenly that he married the hairy-legged goddess in Las Vegas, quite against his mother's adamant objections. This enraged the holy mother so severely that she entirely disowned Ji while he was busy living the high-life in America. Thereafter his Mom appointed his older brother, Satpal, to the now vacant post of the absolute truth.

Having been overthrown in a spiritual coup d'état, Ji clamored to maintain control of his mountain of material possessions in the West which he managed with the help of his nubile wife, now called Mata Ji, the holy cow. Together they ruled heaven and earth, consigning the infernal regions to faithless retards who fail to comprehend their sanctimonious balderdash. 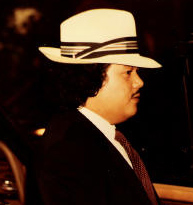 Over the years Ji has stated on many occasions that he never had any intention of retiring or passing on his 64 supernatural yogic powers to his holy cow or anyone else for that matter. In fact Ji has never claimed to have any yogic powers in the first place — his followers seem to have made it all up as a PR ruse.

Eventually Ji could no longer recognize any further need to maintain his masquerade as a Hindu when, in fact, he was loosely associated with North India's Sant Mat, a renegade cult consisting of former Hindus who imagined they were Sikhs without turbans — thereby being neither.

By the end of the stoned age and with the dawn of the 1980s Ji transformed his society using the name Alain Delon or Elan Vital or something. He told his followers that the "India bit" was just a smear campaign not worth the price of being discharged. Ji carefully explained how they were all religions in general and no religion in particular — particularly no religion.

At this stage god never had it so good.

Unfortunately for Ji, he is not god and the clock is ticking away. Currently Ji uses his Prem Rawat identity and his most recent organization goes by the unlikely name, The Prem Rawat Foundation. Once asked when he would return to heaven Ji replied with a deafening grin for none to hear. And lo, volumes of commentaries were composed to explain the hidden purport of Ji's non-answer — the most popular being either maybe or perhaps.

Thus it came to pass that the mystery of how a little Indian tot became god remains unsolved. And why the 1960s counterculture — the baby boomers — reached their maximum sucker limit also remains unclear. Guru Maharaj Ji aka Prem Rawat taught his Western devotees that "gullible" was written on the ceiling, and when they looked up all of them could see that, indeed, GULLIBLE was written on the ceiling. Such is the mystical power of Guru Maharaj Ji that he could make all his devotees see the same hogwash. 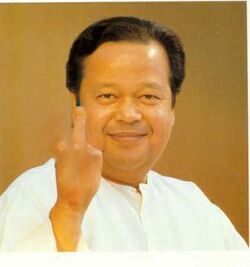