Ultra God is the creator of God. He is rumored to be the only being currently in existence that can not only break dance while standing upon just one toe, but can also juggle one thousand bags of sunflower seeds(Although it is also rumored that it must be no more than one thousand, and no less). This is done by him break dancing, traveling back in time and standing on one toe, then proceeding to travel back in time again and begin juggling sunflower seed bags. Unfortunately, however, 3 Ultra Gods existing at the same time caused the universe to implode. Not to mention it was sort of cheating anyway, but no one has ever questioned him on it. 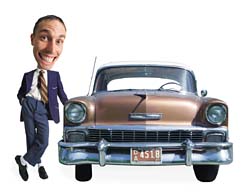 Ultra God, AKA "Bob" or "Ultra Bob" during his time as a used car salesman.

Ultra God's life started pretty normally, until he inexplicably became a used car salesman. For many years, Ultra God went under the name Bob. He achieved somewhat limited success. This lasted until he became greedy and changed his name once again, this time to Ultra Bob. This, however, turned out to be a rather poor move on his part. After the second name change, some were confused, some were enraged, some were hungry, and some were Chuck Norris. It is unknown as to why he was so hated after that. I mean, how the hell should I know? What do I look like, AnswerMan?

Ultra God, being the great merciful god he was, killed them all out of pure rage. Without people, the universe became a lonely place. Ultra God was really never quite the same after that. A deep, dark depression quickly set in.

At the young age of 744,8934,0208,6542 (give or take a few millennia) he moved back into his parent's house. His depression was not helped by how successful his son, God, had become. By this time, God had really made a name for himself. Ultra God became jealous and bitter.

The one person to finally help Ultra God out of his depression was Jesus. No one quite knows exactly how Jesus did it, however it is strongly believed by most historians today that corkscrews, Regis Philbin, and soup were all involved to some extent. Ultra God and Jesus have remained the best of friends ever since. They play Scrabble on Tuesdays. Twister on Wednesdays.

Ultra God claims to have no relation to Ultra Jesus, but I'm sure we all know there's something there he's not telling us about.

The creator of Ultra God is Ultimate God. Although this is widely accepted, many still cling to the belief that Ultra God once dated Brittney Spears, but it is not completely accepted as a fact. Some even say Ultra God dated Justin Timberlake when he was still a women.