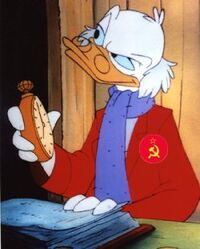 A Christmas Carol is a short story that was written as a joke by Oscar Wilde while dining at his local Denny's on a napkin and thrown away. Surly busboy Charles Dickens fished it out of the bin and printed the story as his own, making a disgusting amount of money off of Christmas lovers and other dangerously simple Englishmen, becoming the richest British author of the 19th century. It is therefore altogether tragic that Dickens never lived long enough to enjoy his six shillings, being executed by the crown shortly after the publication of A Christmas Carol for peddling orphans without a license, and the Jack the Ripper murders.

To this day many question whether Dickens existed at all, and it is widely believed that he was merely an invention of The Party. Considering that a typical English burial at the time was to throw the deceased into a bog, we may very well never know the truth of the matter.

The story, like all morality tales, is incredibly boring and centres around the person of Ebenezer Scrooge McDuck, an unrepentant capitalist who profits greatly from his political connections but never bothers to contribute anything back to the community. It begins on Christmas Eve, where just after filing yet another false accusation of treason with the KGB against his clerk Bob Cratchit, Scrooge is visited by the ghost of his former politico officer, Bob Marley. Marley commands Scrooge not to rock the boat, and tells him that some Christmas spectres will be along shortly to instil in Scrooge the socialist spirit he is so obviously lacking.

First, Scrooge is visited by someone calling himself the Ghost of Christmas Past, but who is obviously based upon Karl Marx. Marx brings Scrooge back in time for the purpose of reminding him of what Christmas was like before the worker's utopia, but Scrooge more of less ignores the Ghost of Christmas Past to instead place bets on sporting events he already knows the outcome of, and creates a paradox by impregnating his own mother.

Scrooge is returned to the present, and it is not long afterwards that he is visited by the next ghost, Vladimir Lenin. Comrade Lenin brings Scrooge to spy on the Christmas dinner of his underling Bob Cratchit, showing Scrooge how a true proletarian celebrates the holidays. Unfortunately around that time the KGB shows up to drag Cratchit off to a gulag in Siberia, and the two run off, while Cratchit's son Tiny Tim is screaming the most remembered line of the novel, "God bless me you, everyone!"

For those without comedic tastes, the "questionable parody" of this website called Wikipedia have an article about A Christmas Carol.

Finally, The Ghost of Future's Past, Joseph Stalin, makes his appearance and drags Scrooge kicking and screaming to a nightmarish, post apocalyptic future where Scrooge's lack of Christmas cheer gave the robots the opportunity they needed to rise up and kill their human masters.

In the end, Scrooge wakes up to discover that everything else in the novel had been retconned to be only a dream. He vows to be more Christmasy, but is beaten and left for dead by the Artful Roger the Dodger, who robs Scrooge and fences all his possessions to the evil child enslaving Jew, Fagin.

Everyone and their mother has adapted A Christmas Carol into a play/movie/cartoon/porno, or something close enough to it you might as well call it A Christmas Carol, so there's really no point in bothering to even try to tell them apart. If it's Christmas, and you turn on your television, chances are what you're watching is A Christmas Carol, and that it's a bit shit. The one with The Muppets and Michael Caine was pretty good though.