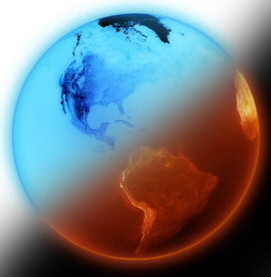 In 100 years, the Earth may be a fiery wasteland, or an icy wasteland. 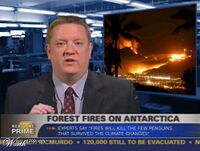 A newscaster reports on a possible Climate Change scenario in 1999.

Carbon Dioxide (molecular formula: C666O2) is both a naturally, unnaturally, and supernaturally occurring gas emitted from angry volcanoes, the natural emission of flatulence from the sea floor, and sarcasm. Since roughly the time of the industrial revolution, mankind has been burning dinosaur blood at an alarming rate to power his machines, and make his snacks. This burning has risen the amount of C666O2 in the atmosphere which has blocked out a measurable quantity of the happy light spectrum from the sun, making the Earth angry... in a heated way.

In condensed form, C666O2 can retain heat exponentially. Many have reported that if one were to breath into a flask and close it quickly, the flask would become red hot and eventually melt. C666O2 has also been shown to be extremely deadly; at just 10cc of pure C666O2 administered intravenously into newborn babies, lethality can reach as high as 50%. It is believed that within 30 years, this terroristic gas will cause a climapocalypse. 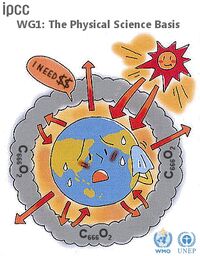 Work Group 1 cover of the official report by the UN's Intergovernmental Panel on Climate Change (IPCC).

In 1995, the UN's Intergovernmental Panel on Climate Change (IPCC) released it's second and most influential propaganda report. Broken down by three sections known as 'Work Groups', the book contained simplistic diagrams which were mostly pictures and few words. Between each work group was a coloring section followed by stickers. The useful information in the report came from the simple diagrams which explains, by way of pictograph, how weather phenomenon works and how it is influenced by man. By following the pictures (after completing a few connect-the-dots activities) it can be determined that the smoke produced from man's camp fires, car exhaust, and evil cigarette smoke, raises, sits in the atmosphere and puts hand-cuffs on the sun-rays, holding them in the atmosphere. When a buildup of sun-rays occur, rabbits and trees will begin to cry, and the Earth will become sad. The saddened Earth will then produce hurricanes and tornadoes, how exactly is unclear however; the Earth is seen as angry at such time with the words "Hot Head" printed above.

During the democratic primaries for the 2008 presidential election, candidates brought up the issue of an emissions trading method known as Cap'n Crunch. By imposing this form of emissions taxation on Greenhouse Gas polluters, a government managed fund could be created which would then be used to build Cap'n Crunch factories. Shown by privately peer-reviewed studies from the IPCC, the crunching sound of Cap'n Crunch causes the emotional breakdown of C666O2, and the eventual apology to the climate for transgressions that happened the night prior. 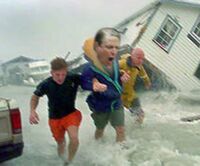 Al Gore running after tipping over a house to make way for a storm surge. 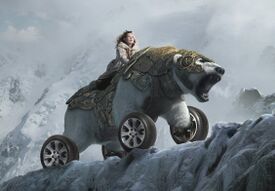 During the early 90's, politicians began pushing the emotionally charged anecdote which asserted that polar bears would eventually be murdered by human-caused, raising temperatures. With the taboo of being branded a murderer, the public quickly supported all things polar bear including buying plush polar bear toys, more Coke-Cola, and mistakenly donating to the World Wide Wrestling Federation.

In 2003, General Motors Corporation began receiving negative fallout after the production of their gas-guzzling Hummer SUV. In order to quell some of the negative press, GM produced the Polar Bear mini van which they boldly claimed that 20% of the price of the mini van would go to the preservation of polar bears. Investigative journalism conducted by ABC's John Stossel of 20/20 discovered that not only was this 20% not going to the preservation of polar bears, it was being funneled into a New Zealand factory called 'Polar Bears' which produced parts for GM's Hummer SUV.

Side Effects of Climate Change[edit]

Talk to your doctor and find out if Climate Change is right for you. Do not take in conjunction with medications containing cheese, broccoli, sparkling grape juice, or MAOI inhibitors. Standing upright while taking is encouraged. Taking while in Australia may exacerbate side-effects.

In 1990, a secret climate model run by an anonymous group of politicians has shown that the Earth will either get warmer by at least 0.01°F within the next 500 years or warmer by 500°F within the next 0.01 years. The complete findings of the group after eight years of research and 154M dollars was distributed nation wide on orange post-it notes with the words "Human are cause" (sic) written on it. Since the release of the note, inquires from prominent scientists worldwide for the group to expand upon their findings have been met with silence.

Proponents of climate change, such as The Church Of Scientology, Al Gore and Santa Claus, claim that climate change will devolve humanity, eviscerate the Earth, and collapse the entire universe. On new years day of 2005, The Church Of Scientology, Al Gore and Santa Claus, collectively, aired pornographic commercials on every major network in order to get their Climate Change message out. Dubbed the Green-Thumb-Threesome, a cardboard cutout of L. Ron Hubbard stood next to an exposed and flaccid Al Gore while Santa Claus (Chris Cringle) explained Climate Change. At the conclusion of the 30 second ad, Al Gore stated "If you don't want to see this anymore, you'll do something about the climate". The commercial met with severe criticism, but the stations continued to play the ads due to the substantial prices the threesom were willing to pay.

In December of 2009, Denmark hosted the COP15 United Nations Climate Change Conference in Copenhagen. Every leader of the world was encouraged to attend so that a framework for world-wide carbon-offset taxation could be enacted on every man, woman and child for all eternity. Scores of world-leaders arrived in Copenhagen on opening day, many in carbon dioxide spewing aircraft to make the point to the world that their pious environmental morals that they were to put on others didn't apply to them.

During the COP15 conference in Copenhagen, the Zombie Nation Lobby, lead by Hanz Ooooohhhh urged world leaders to add a referendum for zombies to be excluded from the carbon-footprint tax on grounds that zombies do not drive, do not operate heavy equipment, and do not breath. Additionally, Ooooohhhh warned that if the referendum wasn't added, that he will see to it personally that "...brains will be eaten".

These two claim to have nothing to do with it

Much of the official climate science research is a trade secret kept in Castle Greyskull, and the little that is released is often debunked (laughably) by third party research. Independent scientists across the world claim that the limited climate model information released "...isn't even remotely accurate". Furthermore, scientists claim that ice core samples and tree ring data are often cited as originating from either the 1851 novel 'Moby Dick' or the 'Holy Bible'. However, prominent climate research scientist prof Phil Jones of the East Anglia Climatic Research Unit, fervently disagrees with any and all skepticism about global warming: