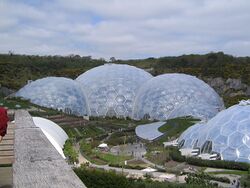 The Amon Project, in Cornwall, England. It is the world's largest greenhouse, and private retreat of King Charles III.

The Greenhouse effect is a curious psychological imbalance that hits people in their early fourties. The main symptom is a vague but irresistible urge to go to a greenhouse and generally "potter about" (to use the victim's lingo). The effect in some people is so strong that they have been known to sell family pets in order to procure a greenhouse for the garden so that they can stand in it during their free time. From here, the descent into alcoholism, drug addiction and general mania is all but inevitable.

The greenhouse effect first came to the world's attention during the 1980's, when studies were released that demonstrated how global temperatures are rising due to all the sunlight reflected back into the atmosphere from the roofs of greenhouses. During the last forty years, the amount of greenhouses on earth has increased dramatically, from around 10 to 458,231,345.00 billion.

Campaigners have been lobbying for the removal of greenhouses and their replacement by sheds. Sufferers argue that a shed is just not the same - claiming that there is a certain melancholy about the shed which the greenhouse entirely lacks. Governments also resist the pressure, insisting that the right to potter about in a greenhouse is essential to all human happiness. The fact that many sufferers of the greenhouse effect are themselves government members is usually hushed up in the mainstream media.

Recently, more effort has been made to focus on the sufferers themselves. A 'Just say No' campaign highlighted alternatives to standing in a greenhouse, such as collecting gravel, filling guinea pigs with helium or hillwalking. A more successful campaign suggested that building a big fire in the garden and burning stuff in it might be a more satisfying alternative to pottering about. This proved to be entirely correct, but the smoke from all the bonfires caused problems and the sun was nearly entirely blocked out over Durham. 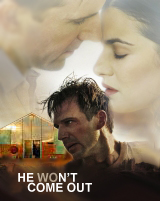 A recent drama, 'He Won't Come Out', starring Ralph Feinnes and Uma Thurman, has highlighted the domestic impact of the greenhouse effect. In a particularly moving scene, Uma's character comes home to find Feinnes in the garden, holding a piece of glass over his head, 'just to see what it feels like'. A hugely successful ice cream salesman, Feinnes descends into an incurable mania for fertiliser and twigs.

Victim talk - a lexicon for the unwary:[edit]