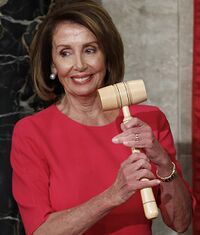 Nancy Pelosi (born March 26, 1940) is the Congresswoman from San Francisco, California and the Speaker of the U.S. House of Representatives. She is a member of the Democratic Party and has been around so long that Washington, D.C. was still a literal swamp when she was first elected to Congress in 1987.

As Speaker, Pelosi is third in line to the Presidency and was the most powerful woman in American government, despite receiving the support of only one of the nation's 435 Congressional districts. This changed in the general election of 2020, when Pelosi was leapfrogged by Kamala Harris, as Vice President the second in line, despite receiving no measurable support from anyone.

In 2020, Democrats cheered when Pelosi tore up President Donald Trump's address to the nation, an act of vandalism that harmed her opponents more than her. However, Democrats on the progressive wing see her as an obstacle, while the Republicans see her as the Wicked Witch of the Woke, casting spells and reading out incantations to jinx conservatives and usher in Marxist-Communist liberalism, surely with a statue of Hugo Chavez on her dressing table, atop a Dominion voting machine of the sort she and the late Hugo Chávez used to flip votes in the 2020 election. 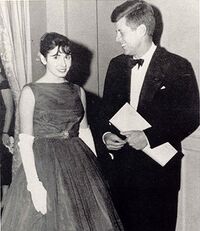 When the Earth was still young, a spirit from the deep entered the soul of America. It was given the name of Nancy D'Alesandro, a French-Italian immigrant of questionable status. Conventionally, Nancy was born of a human couple and outwardly conformed to the norms of Rockwellian America. She was dutiful, quick to marry and stay home looking after her children. But Nancy was ambitious. She wanted to be the first female president of the USA, a fantasy brewed when she met her political hero, President John Kennedy, at a private swimming pool inside the White House. Nancy insisted "nothing went on" despite Kennedy's reputation as a loose-pants politician, of a type the Democratic Party has been a conveyor belt for over the past century.

Thereafter, Nancy D'Alesandro's entire focus was politicking for the Democrats. She met her husband, real-estate businessman Paul Pelosi, while out fundraising. The couple were married and soon had a family of four girls and one boy. All have gravitated to supporting their mother and are active in politics too, raising the specter of a Pelosi dynasty to someday take its place among the Kennedys, Bushes, and Clintons, in America's virtual House of Lords. 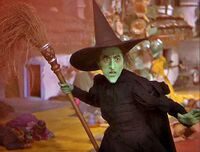 How Nancy Pelosi really looks like after you remove the liberal filters on the default settings of Photoshop.

Nancy got involved in Californian politics (though a native of Maryland). The state had been largely Republican but thanks to the Democratic Party's extended support of immigration to that state, it started to change colour from the deepest red to the bluest blue. Nancy helped to accelerate this process. In 1987 she switched from state politics to going federal and was elected to the House of Representatives in 1987. She has been there ever since, an immovable force.

Her actual political achivements are difficult to identify. Nancy was seen as reliable, sober and unlikely to get involved in any typical Democratic Party hanky-panky. Unlike Hillary Clinton, she avoided murdering people or locking up children in basements to feed on at night. What did get her political enemies was her razor sharp voice that gave the willies to Republicans in particular. So they pushed her up in their party's own demonology as someone to fear and hate.

In 2002 Nancy became the leader of the Democratic Party in Congress. She was the first woman to achieve this position. Five years later she became Speaker of the House of Representatives under the presidency of Barack Obama. To Democrats this seemed to herald the new age of the New Deal. But four years later this power evaporated as the Republicans regained control. By now many Democrats were whispering it was time for her to retire.

The arrival of Donald Trump as president gave Pelosi a second wind. With the retirement of Barack Obama and the defeat of Hillary Clinton, Pelosi more that before was now the face of the Democrats. Her raspy voice and wrinkly visage everytime she mentioned the president was always enough to get Republicans' hearts pumping hard. Stories then emerged that Pelosi was like Marie Antoinette with a emperor's sized fridge that contained tubs of gourmet ice cream her own constituents could never afford. In other words she was a hypocrite. What's wrong with ice cream that tasted of mouthwash?

In 2018 Nancy Pelosi and the Democrats regained the House of Representatives. So now just being the face of her party, she now had real power. Trump countered this by ensuring his ally Mitch McConnell in the Senate would put to sleep anything his opponents could come up.

So without doing anything of note, Pelosi went back to the usual Democratic Party policy of empty grandstanding. Her face appeared constantly on the party-friendly channels like CNN and NBC. It was the usual stuff, call-outs to the party's coalition of envy and a regular bashing of Trump. For that Trump came up with many names from 'Crazy Nancy', 'MS13-Nancy' to 'Nancy Antoinette'. Unlike Hillary Clinton, Nancy appeared to be unaffected by Trump's name calling and he, in turn seemed a bit afraid of her. Perhaps Nancy reminded him of his Scottish-born mother?

Pelosi minces no words — just her copy of the speech.

In 2020, in one of the last iconic moments in American politics before the coronavirus swept away iconic moments as well as face-to-face get-togethers, Pelosi sat quietly through Trump's State of the Union speech, concealing her scowl and politely applauding except during the medal award to Rush Limbaugh, when she sat on her hands until they were even more pastey-white than usual. However, barely after Trump's last line, a ripping sound was heard above Trump's head. These are not unusual in that august chamber, which uses state-of-the-art air purification. However, in this case, it was Pelosi tearing her courtesy copy of the President's speech into confetti before flinging it into the air to scatter on the President below. The show of overt contempt — which, when her party does it, is referred to as "speaking truth to power" or in this case tossing paper at power — made "good TV" but got people wondering whether she was as demented as he was.

Demented or not, Pelosi had an ace in the hole. Despite the failure of the Mueller Commission to unearth any "high crimes and misdemeanors," Pelosi's party found something on which to impeach Trump. Attention turned to the Senate for the trial — but Pelosi did not, holding onto the parchment for a full month to try to tell the Senate how to conduct the trial. This did not pan out, and the Senate required barely three days to conclude it would benefit no one to create a vacancy for Mike Pence to fill. 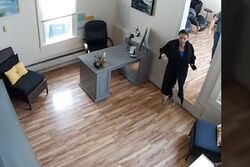 Pelosi was outspoken that the coronavirus outbreak "changed everything," such as the need for the restaurant industry, the need for a budget by the start of the fiscal year, and the need for secure handling of Presidential ballots. Fatefully, coronavirus did not change everything for Pelosi herself. As San Francisco locked down tighter than her own control over the House and mandated that everyone wear face masks, Pelosi evaded both measures, inducing a favorite hairdresser to reopen long enough to give her a perm. Even more fatefully, the owner opened up not just her salon but its security cameras, and the nation glimpsed a mask-less Speaker tiptoeing in to get a nudge toward beauty that others were ordered to do without. Stealing a line from former D.C. mayor Marion Barry, Pelosi explained that, "The bitch set me up." A more patriotic salon owner would have said, "No way, Madame Speaker!" and devil take the licensing board. 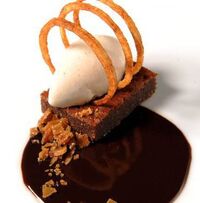 Spud-with-brownie was the Flavor of the Month.

The notion that Pelosi was oblige-ing a bit too much of her noblesse got a shove when she showed CBS late-night comedy host James Corden how she "gets through the lockdown" that left so many Californians jobless and bankrupt: dual Sub-Zero® freezers filled with Jeni's® chocolate ice cream, a cache richer and more stimulating than the eventual coronavirus stimulus checks she would push through Congress.

Pelosi endured these bits of bad press because of her ability to walk a tightrope between her extreme faction, led by Alexandria Ocasio-Cortez, and more conventional Democrats who look to win re-election. The two factions remained unified, resisting any enactment that might make Trump look good. As an astonished Trump went down to defeat, however, an astonished Pelosi found that President-elect Joe Biden had zero "coat-tails," that rather than seeing her majority grow, it dropped to only ten seats — and Biden wanted three of them in his Administration. Republicans hoped that anything from a resurgence of the virus to the vagaries of D.C. traffic might make the Democrats pull up short on the day of the formal election of the Speaker.